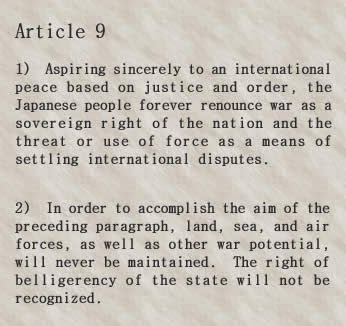 The 20th century was the century in which this great experiment was done. Let's set up an international system in which each state has the right of legitimate violence and the right of belligerency and monopolizes that. And, through the balance of power and so forth, each of these states will protect its citizens. That was the big experiment of the 20th century. What happened?

More people were killed through violence in the 20th century than any other hundred year period in the history of the world. And who killed these people? It wasn't the mafia, it wasn't the yakuza, it wasn't gangs, it wasn't drug wars, it was the state. The state killed over 200 million people.

While Japan was responsible for millions of these war dead, since 1945 no Japanese soldier has killed or been killed in war, thanks to the postwar Japanese Peace Constitution which states that the Japanese people are "resolved that never again shall we be visited with the horrors of war through the action of government," and specifically outlaws war and state belligerency as a means to settle international conflict.

Japanese and Okinawan people, for over 60 years, have striven to keep the Peace Constitution intact, in letter, even as the spirit has been violated by state remilitarization. For these efforts, on April 9, 2014, the Norwegian Nobel Committee announced the “Japanese people who conserve Article 9” have been nominated for this year’s Nobel Peace Prize.

Also on April 9, more than 3,000 Japanese citizens gathered in Tokyo to show their support for Article 9 at a rally organized by the Article 9 Association, a network founded in June 2004, to defend the war-renouncing clause of the Constitution. Nobel Laureate Kenzaburo Oe, literary spokesperson for the postwar generation whose childhoods were devastated by the Second World War, stated to attendees:


By exercising the collective self-defense, Japan will directly participate in a war...

I’m afraid that Japan’s spirit is approaching the most dangerous stage over the past 100 years...


Article 9 has inspired us. I'm proud of it.

The Japanese and Okinawan people have long been proud of Article 9. In 1946, Presbyterian minister and prewar peace activist Toyohiko Kagawa, twice nominated for a Nobel Peace Prize, declared Article 9 “a model for the entire world." Former Okinawa Governor Masahide Ota wrote that Article 9 gave him the "will to live" following the devastation of the Battle of Okinawa.


From the moment Article 9 was announced, in newspapers and among the general public, it was greeted positively and with great sympathy. In that sense, the existence of Article 9 strongly influenced the posture of the general public, the public's response to the Japanese Constitution as a whole. At the time, Prime Minister Shidehara really talked about Article 9 with a great deal of pride…

In reality, the instant they say it, most citizens thought, "Ah, now we will never have to experience war again." There was a sense of relief that Japan had changed... Article 9 actually had significance in an international context. I don't think the Japanese people really grasped this at the time. But internationally, what it meant was Japan, as the aggressor nation, made a pledge to the world about its future conduct, especially a pledge to the people of Asia. And it was received as such by people in Asia.

In the same film, John Dower, MIT historian and author of Embracing Defeat, a Pulitzer-Prize winning book on postwar Japan, praised ordinary citizens for the nation’s postwar policy of peace:


I had a lot of respect for the Japanese people who cherish those ideals and fought for them and tried to understand them.

What held together that idealism of the early years, what made that survive over the decades of the 50s' and 60s' was not the Japanese government so much as ordinary Japanese people, a slot of them women or men who had served in the war, who remembered the war.

People who remembered what war was really like said, "We can't do this again. We have to cherish these ideals." The government, however, was saying, "Oh, we've got to go along with America." And so you have this split in Japan.

This is the second Nobel nomination for Article 9. In 2008, after the first Global Article 9 Conference was held in Tokyo, Nobel Laureate Mairead Maguire nominated the organizers Peace Boat and the Global Article Nine Association (which Peace Boat co-founded) for a Peace Prize, on behalf of Article 9. The Peace Clause has long had the support of other Nobel Peace Laureates and prominent global peace activists.

In "The Nomination of Article 9 of Japan's Constitution for a Nobel Peace Prize," East Asia scholar Alexis Dudden describes the intriguing interconnection between Henoko and the Nobel nomination:


Late last spring, Takasu Naomi, a...housewife from Kanagawa prefecture outside Tokyo, began to collect signatures on her personal web page to preserve Article 9 in an effort to garner a Nobel Peace Prize for it and publicize its meaning internationally…she submitted an entry on behalf of…the “Japanese people who conserve Article 9”)…

During the New Year’s holidays, Hamaji Michio, a businessman in Tokyo...responded enthusiastically to Takasu’s drive: “Shocked and so inspired,” as he puts it. Believing deeply in the drive’s core message, Hamaji immediately offered his political and business world connections...

He... turned…to a small group of foreigners — mainly U.S.-based academics as well as Nobel laureates and nominees — many of whom by chance were also appearing in the January newspapers having signed a petition in support of Inamine Susumu’s bid for mayor in Nago, Okinawa…

Along with foreign scholars and luminaries, many high profile Japanese figures are increasingly speaking out on behalf of Article 9, the peace clause. On the eve of his birthday last December, Emperor Akihito (tutored by an American Quaker during his youth) defended Article 9. Then, on the eve of his birthday in February of this year, Crown Prince Naruhito attributed Japan's peace and prosperity to the pacifist Constitution.

And at the grassroots, citizen action across various civil society organizations and networks is buzzing.  The Global Article 9 Campaign held a second conference in Osaka in 2013. Since 2004, the Article 9 Association has generated more than 7,500 like-minded groups across Japan so far and will will commemorate their tenth anniversary on June 10, 2014 (at 6 pm at Shibuya-kokaido in Tokyo).

Petitioning The Norwegian Nobel Committee: Dear Mr.Thorbjorn Jagland Chair of the Nobel Committee  - To spread a pacifist constitution in all the countries of the world, please award the Nobel Peace Prize to the Japanese citizens have maintained the Constitution of Japan, Article 9 in particular:

To spread a peace constitution in all the countries of the world, we request that the Nobel Peace Prize be given to the Japanese citizens who have continued maintaining this pacifist constitution, Article 9 in particular, up until present.

John Junkerman, "The Global Article 9 Conference: Toward the Abolition of War," The Asia-Pacific Journal: Japan Focus, May 25,  2008.

-JD
Posted by TenThousandThings at 2:37 AM
Email ThisBlogThis!Share to TwitterShare to FacebookShare to Pinterest
Labels: Article 9, Japan, Okinawa, peace