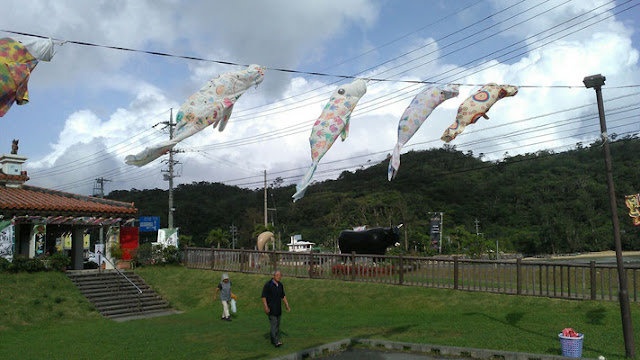 These beautiful  Okinawa Dugong flags for Children's Day at Wansaka Oura Park were made by Mr. Takuma Higashionna, who has memories of swimming with dugongs in the Sea of Henoko, and who is one of the Dugong Lawsuit plaintiffs. The federal lawsuit, initiated in 2003, is now on appeal at the 9th Circuit Court of Appeals in San Francisco.

The plaintiffs have challenged a plan by the  U.S. and Japanese governments to landfill not only Okinawa's last intact, healthiest, and most biodiverse coral reef, but also the Okinawa dugong's most important seagrass feeding ground, despite appeals by Okinawans and their worldwide supporters for 23 years to save the world-class natural cultural heritage ecoregion.

The Japanese government, so far, has ignored a democratic referendum that took place in February this year, in which an overwhelming majority of Okinawa voters opposed the destruction. The Okinawan people are fully supported by Okinawa Governor Denny Tamaki, who succeeded Govenor Takeshi Onaga.  The late Governor Onaga won the governorship, after a campaign supported by the All-Okinawa coalition that bridged conservative and liberal political parties.  Their focus was and is shared Okinawan unity, dignity, and cultural heritage.

Peter Galvin, co-founder of the Center for Biological Diversity, tells us that dugongs, gentle marine mammals (salt water relatives of manatees), EW revered by native Okinawans, and celebrated as “sirens” that bring warnings of tsunamis. The dugong is listed as an natural monument of national cultural significance under Japan’s Law for the Protection of Cultural Properties. Under the U.S. National Historic Protection Act and int. law, the U.S. must avoid or mitigate any harm to places or things of cultural significance to another country.

Mr. Higashionna told Americans while at court in San Francisco that "The U.S. government must realize that the Okinawa dugong is a treasure for Okinawa and for the world.”

Dugongs (also related to elephants as well as manatees) can live for 70 years and grow to nearly 1,000 pounds. In the transparent aqua waters of  Henoko Bay, vast herds of dugongs once grazed peacefully on underwater fields of sea grass. But after decades of active U.S. military war training in the region, possibly fewer than 50 last dugongs now struggle to survive in the formerly idyllic Okinawan islands  — once dubbed the “Galápagos of the East” for its rich biodiversity. Recent surveys showed 3 dugongs living in the Sea of Henoko. Tragically, one was killed in March, and washed ashore covered with abrasions and injuries.

Every year in Okinawa (and Japanese) people display carp flags from late April to early May in celebration of children’s day, which marks the end of Golden Week, a series of holidays that start on April 29, Showa Day, the birthday of former Emperor Showa, who died in the year 1989, May 3, Constitution Day, May 4, Greenery Day and May 5, Children's Day.