Then and Now from Paul Johannessen on Vimeo.
Exquisite, nuanced short film by Paul Richard Johannessen
featuring interviews with Ishinomaki residents about the issues
still facing their community nearly one year following the 3/11 tsunami devastation

Two months after volunteering for the first time in Ishinomaki—one of the Japanese cities in the Tohoku region hardest hit by the tsunami last March—my partner and I headed back again in the beginning of January to volunteer over the long weekend.

Previously, we had stayed at the Koganehama Kaikan and volunteered with the troupe headed by Fujita san (who is profiled in the above video), which is now apparently known as the Association to Revitalize Ishinomaki (ARI). This time, we decided to base ourselves with It’s Not Just Mud, another fantastic group of volunteers with whom we had hooked up on one of the days during our previous visit.

While we had hoped to be involved with some physical work and perhaps be able to take a trip further out along the coast to work with some of the fishing communities, these were not among the projects that we were assigned to for the weekend. No matter. As volunteers, we were naturally ready and willing to go wherever we would be of most help, and of course every experience is interesting and fulfilling in its own way.

On our first day, we were assigned to help with a takidashi, or a communal meal served outside; a soup kitchen, of sorts. The morning was spent chopping carrots, slicing tofu, dicing daikon radish, and then throwing it all into an enormous pot together with pork, satoimo (a root vegetable similar to a potato) and miso to let it simmer into a rich, mouth-watering stew. The takidashi is held every Saturday afternoon along with a bingo game, and the locals with whom I spoke—many of whom are living in temporary housing units as they await more permanent living situations—said that the event was one of the greatest highlights of their week. 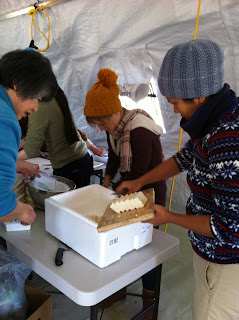 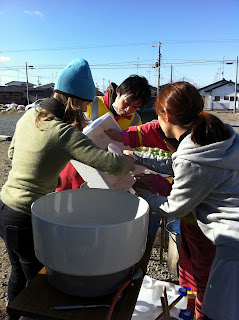 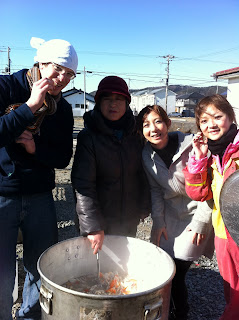 Indeed, many Ishinomaki-based volunteers remarked that much of the sadness that permeated the city in the weeks and months after the tsunami seems to have lifted greatly, with residents who decided to remain in the city now going about the task of rebuilding their lives and livelihoods. Still, however, those with whom I sat down to chat over a cup of coffee while we waited for the soup to finish cooking had terrifying stories to tell about when the tsunami hit. One woman was in tears, recalling how she had lost her house and all of her possessions. I noted that on both occasions when I volunteered, most people did not speak of having lost loved ones, and I hesitated to inquire about the safety of their family members for fear of touching upon a potentially sensitive and painful subject. Instead, I simply listened openly and compassionately to whatever they felt open to sharing.

After lunch was finished, we headed back to INJM headquarters—a house that was donated by a family who postponed its scheduled demolition for a year after learning that the organization was seeking a place to house its volunteers. We gathered a change of clothing and headed to the sennninburo (literally, “bath for 1000 people”)—a communal bathhouse that was only available in the late afternoon and early evening, with women and men taking turns. Set up for local residents who had not been able to bathe properly for days and even weeks following the disaster, it was a tiny wooden structure accommodating not 1000 people, but rather only five or six at a time—with locals of course getting first priority. Once we made it inside, the fiery-hot bath felt fabulous given the frosty temperatures outside. 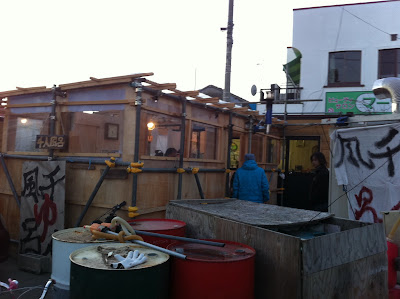 The next morning, super-friendly and helpful INJM crew leaders Naomi and Ayami took us to one of the worst-damaged areas of Ishinomaki near the coast, explaining that it was important to see firsthand the extent of the tsunami’s destruction in order to truly understand what had befallen the city. After driving past an enormous barrel that had toppled over from a factory, we stopped at the elementary school that appears in the video at the top of this post. Located just in front of the ocean and directly next to a cemetery, car upon car had been swept onto the premises after the waves struck—igniting a fire that caused even further damage to the school than that already sustained from the tsunami. Walking inside and seeing the remains of children’s desks, toys, artwork and even shoes amidst the charred ruins was truly one of the saddest scenes I have witnessed in my life to date. 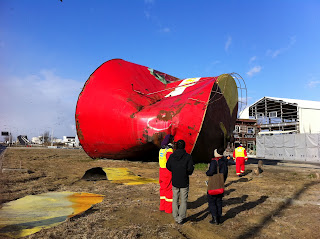 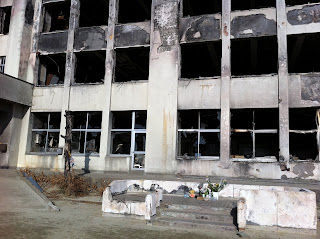 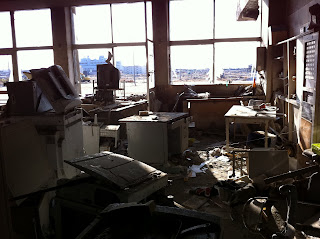 We next went on to our assigned task for the day, which was helping to clean photographs from a local community center by rinsing them in water, wiping away bacteria, hanging them out to dry, and then placing them in new albums. The photographs were from local sports day festivities that dated back to the 1980s, and it felt good to know that our efforts were helping to contribute to the preservation of important community memories. 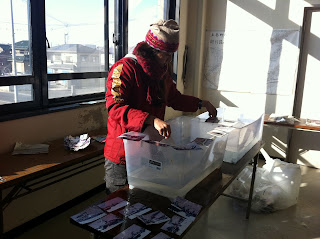 We had lunch at the home of Nobuko Hashimoto, who lived a short walk away from the community center. Volunteers helped her rebuild her home, and to show her appreciation, she cooks elaborate meals for volunteers at INMJ and other organizations free-of-charge nearly every day. 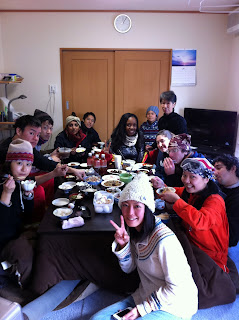 The INJM crew , served a sumptuous lunch spread by Hashimoto san (back right)


After another couple of hours finishing up the day’s work on the photo restoration project, Naomi took my partner and me to the temporary housing units to drop off gifts to some of the women we had met during our last visit. We then went out for our bath (this time to a proper onsen facility, as the sennninburo closes on Sundays), ate a scrumptious meal of maguro (tuna) back at the INJM house, and then said our goodbyes to our new friends before hopping on the night bus back to Tokyo.

It’s Not Just Mud is a perfect way to volunteer for those, like myself, who prefer a loosely-structured and yet well-organized experience in a relatively small group.

The It’s Not Just Mud website has details for anyone wishing to join them to volunteer in Ishinomaki for any length of time. Personally speaking, I will definitely be returning in the sooner-rather-than-later future. 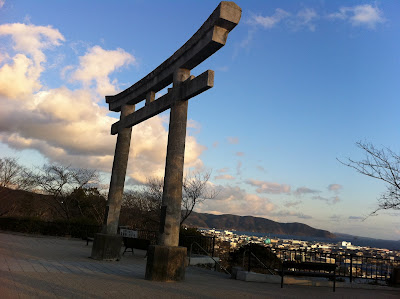 Shrine at Hiryoriyama Park in Ishinomaki,
located atop a hill where many local residents sought refuge from the tsunami on 3.11.11


--Kimberly Hughes
Posted by TenThousandThings at 6:24 AM
Email ThisBlogThis!Share to TwitterShare to FacebookShare to Pinterest
Labels: 3/11, 3/11 survivors, films, Japan, Tohoku