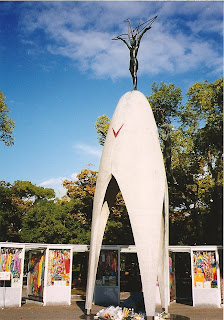 Children all over the world send ten million origami cranes each year to the Children's Peace Monument at Hiroshima's Peace Memorial Park. The monument was created in 1958; if the ten million figure is an annual average, that means that Hiroshima has received over 500,000,000 cranes.

An inscription on the 30-foot monument topped by a statue of Sadako Sasaki (who died of radiation-related leukemia in 1955 at 13) holding a golden crane exclaims: "This is our cry. This is our prayer. For building peace in this world."

The site includes links to other sites memorializing horrors of the Pacific War––including the Battle of Okinawa; the story of POWs imprisoned in a Japanese military "hell ship;" and other atrocities (the Center of Research and Documentation on Japan's War Responsibility documents many).