A group of Okinawans have brought a lawsuit against the Japanese government—challenging the legality of the planned US military base move from Futenma to an ecologically sensitive coral reef in northeastern Okinawan:


...The complainants claim construction of a new airfield on the lower part of Camp Schwab, with runways reaching into Oura Bay, would endanger the threatened Okinawa dugong, a marine mammal related to the manatee.

It was the first such legal action taken in Japan against the plan to replace the Futenma air station in urban Ginowan with a new facility in rural Henoko. The lawsuit was filed Wednesday in Naha District Court...

However, it was not the first such legal action elsewhere: Okinawan citizens and global environmentalists have been resisting the move since its announcement.

On a page linking to an ongoing online action on behalf of the dugong, the Center for Biological Diversity summarizes federal lawsuits dating back to 2003:


...The Center has used innovative legal tactics to secure new protections for the dugong. In 2003, we led a coalition of Japanese and American environmental groups in suing the U.S. Department of Defense to halt the construction of an American airbase in Henoko Bay. Since the dugong is protected under Japanese cultural properties law, the Center filed the first-ever international lawsuit under the U.S. National Historic Preservation Act to protect its last habitat. In 2004, we helped organize a resolution by 889 of the world’s leading coral-reef experts that called on the Japanese and U.S. governments to abandon their plan to construct the offshore airbase. And we led hundreds of international conservation groups in calling on former President Bush and Prime Minister Junichiro Koizumi to cancel the airbase plan.

In 2005, a federal judge ruled that our lawsuit over the airbase could proceed under the U.S. National Historic Preservation Act. The international coalition reiterated opposition to the airbase and rejected an altered construction proposal by the United States and Japan that would still devastate dugong habitat. Finally, in 2008, a federal judge ruled against the U.S. Department of Defense, requiring it to consider impacts of a new airbase on the dugong in order to avoid or mitigate any harm... 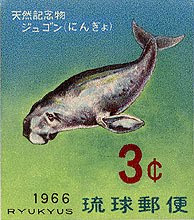 Earthjustice has an entire page of info dedicated to coverage of these lawsuits: "The Dugongs vs. The Department of Defense." Its photo of a 1966 commemorative stamp of the establishment of the dugong as a national monument illustrates the environmental and cultural issues at stake in this struggle.

Hideki Yoshikawa's account of legal activism to protect the dugong, "Dugong Swimming in Uncharted Waters: US Judicial Intervention to Protect Okinawa's 'Natural Monument' and Halt Base Construction," published this year at The Asia-Pacific Journal gives details and insights on the latest.
Posted by TenThousandThings at 2:58 AM
Email ThisBlogThis!Share to TwitterShare to FacebookShare to Pinterest
Labels: animals, biodiversity, cultural heritage, democracy, ecosystems, historic preservation, Okinawa