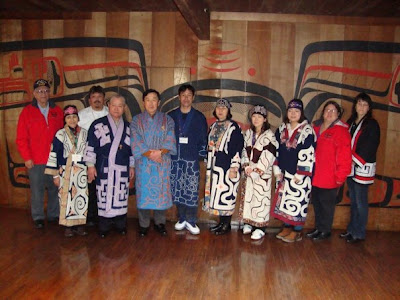 An article in the Seattle based Northwest Asian Weekly featured an account of a recent meeting in Hokkaido between Native Americans of the Puget Sound region (and members of the Ainu Association of Hokkaido last week. This international cultural exchange sponsored by the Burke Museum of Natural History and Culture was launched in "an effort to support the revival of cultural heritage of the indigenous Ainu people of Japan."

Members who joined the journey to Sapporo, Nibutani, Akan, and Shiraoi included: Deana Dartt-Newton and Robin Wright (both curators from the Burke Museum), Lisa Marie Oliver (Quinault/Program Assistant), Anna Hoover (Aleut/Filmmaker), Dan Hart (Director, UW Native Voices Film Program) and one representative each from five of the groups who hosted the Ainu when they came to Washington State in December.

According to the Burke Museum press release:


In an effort to support the revitalization of the indigenous Ainu culture of Hokkaido, Japan, the Burke Museum received a $120,000 grant from the Museums and Communities Collaboration Abroad program last year to coordinate a cultural exchange between the Ainu and Northwest Coast tribal groups, such as the Makah, Squaxin Island, Suquamish, House of Welcome Longhouse, Duwamish, and Tulalip communities. The grant focuses on the shared history of sea and canoe traditions between the Ainu and Native Americans.

The 10-person Ainu delegation visited in December where they met and toured Northwest tribal communities and museums, shared issues, and gained insight and background in US/American Indian law, treaties, and land claims vital for their negotiations with the Japanese National Government.

Says grant PI Deana Dartt-Newton, "We had no idea, really, the extent to which these indigenous peoples have experienced the same histories--their ancestors relocated, enslaved, and made to feel ashamed of their heritage as indigenous peoples. However, the sense of pride and excitement during the exchange was incredible and the empowerment as indigenous peoples coming together overshadowed the grief."
This meeting first international trip sponsored by the Burke Museum The two groups met in an effort to support the cultural revitalization of the Ainu people.