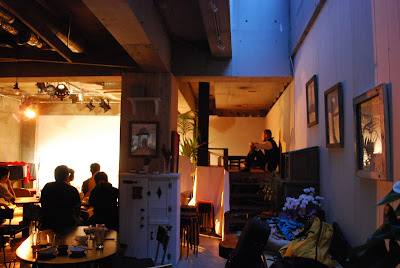 This past Sunday, on a scorching hot afternoon when many Tokyoites had escaped to the nearest beaches, twenty or so people gathered in Café Otokura, a small, artsy basement space in the Shimokitazawa neighborhood to learn more about how U.S. militarism is impacting another corner of our earth.

Peaceful New Earth Celebration Part II, the follow-up to the event of the same name held last month in Yoyogi Park, was organized by Peace Not War Japan and the Neo Ryukyu Arc Network in order to bring attention to historical anti-base struggles in Guam and other Mariana Islands—also known as U.S. colonies—and to make connections between peace movements.

The event began with a screening of The Insular Empire: America in the Mariana Islands, a documentary film directed by Vanessa Warheit. The film introduces viewers to the complex relationship between local residents and military history in the region, with a focus on the continuing harsh impact of U.S. militarism and colonization on the dwindling indigenous Chamoru population.

The film spotlights the personal stories of several individuals, including Hope Cristobal—a Chamoru woman who goes from beauty pageant winner to local politician to powerful advocate at the United Nations speaking out about her peoples’ continuing struggles in the face of relentless militarism.

Through the film, it becomes clear that the United States—while claiming to stand on behalf of liberty and democracy—is betraying these very same ideals by forcing unwanted military expansion on peoples who are given no voice regarding what happens on their islands.

The screening was followed by a presentation from Hibiki Yamaguchi, a researcher with the Peoples Plan Study Group who has conducted related historical research on Guam. “The United States military is viewed gratefully by much of the population as liberators from Japanese occupation, but in fact, locals who had been forced by Japanese occupiers into concentration camps ended up surviving the later carpet-bombing of huge sections of the island by the U.S. military,” he explained. “While I am certainly not justifying the actions of the Japanese decision makers at the time, it is still important to understand the complexity of this history on the island.” 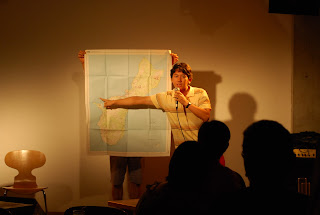 Yamaguchi’s talk was followed by a short discussion from Peace Not War Japan organizers, who introduced the powerful work of Chamoru human rights lawyer and activist Julian Aguon, and explained the ongoing citizen movement to protect the historically sacred Chamoru site of Pagat from being turned into a U.S. military firing range.

Several audience members spoke up next, expressing a series of thoughtful questions and comments regarding the film and presentations.

“I identified strongly with Hope Cristobal’s comment during the film that she just could not comprehend why everything on Guam was so closely connected to the military, as seen for example in the highly militarized Independence Day parades that take place on the island,” said one woman. Other audience members expressed surprised dismay at having learned through the film that peoples in the Marianas do not enjoy the full rights of U.S. citizens.

“There are not enough opportunities to think intersectionally about the legacy of Japanese imperialism and the institutionalized violence of USA imperialism, especially in places like Guam and Saipan,” commented Megumiellen Kanada, another attendee who was visiting Tokyo from Philadelphia, USA. “This event confirmed that ideas and actions resisting oppression cross all borders, and that there are good people everywhere I go. I am grateful for this new knowledge, and I am now trying to figure out ways to continue these conversations and make connections between peace movements.” 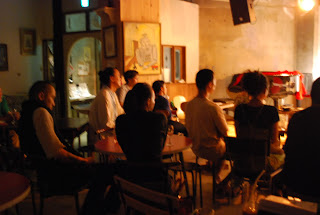 
Following the Q and A session, roots reggae singer Takeru—an artist appearing regularly at Peace Not War Japan festivals-- performed a heartfelt set of songs touching upon various aspects of the general theme regardingg the struggle to overcome opression. 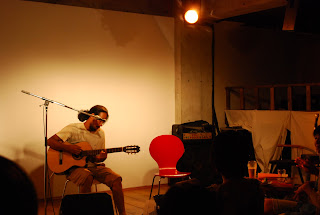 
Tokyo Ghetto Shamisen (a one-man-band featuring Atsushi Sakata) was up next, surprising the audience by appearing barefoot in the back of the darkened room—and staying there for nearly the entire duration of his electrifying performance.

“If we reach down to the deepest root of things, we can understand that the act of war is in fact the cycle of people attempting to protect themselves from danger,” he commented between songs. “We must realize that we are all human, and begin relating with each other in positive and healthy ways.” 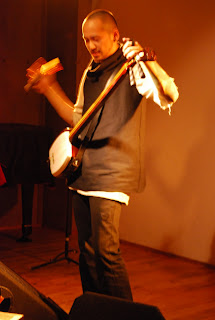 
“I normally don’t speak much during my live shows, largely because I am acutely aware of the limit of spoken words,” he continued. “Music is comprised of vibrations, and good vibrations have the power to create positive outcomes—just as bad vibrations can easily create negative ones. I am aware of this reality as I feel my own connection with my instrument, with the earth, and finally with the universe.”

A short video featuring mesmerizing footage of Sakata’s open-air performances, as well as an interview (in Japanese), may be viewed here.

The event closed with words from Hitomi Akazaki, co-coordinator of the Neo Ryukyu Arc network. “There are many similarities between indigenous movements around the world, including the Chamoru and Okinawan peoples, as we learned during today’s event,” she explained. “Right now in Okinawa, there are activists who are studying the example of Guam as they prepare to make similar presentations to the United Nations regarding their situation. We must continue linking hands between these struggles as we keep our eye on the larger picture.”

A recent piece on Democracy Now!, titled "From Japan to Guam to Hawai’i, Activists Resist Expansion of US Military Presence in the Pacific,” also gives excellent background on the topic. 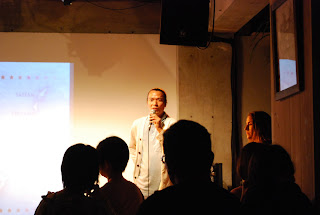