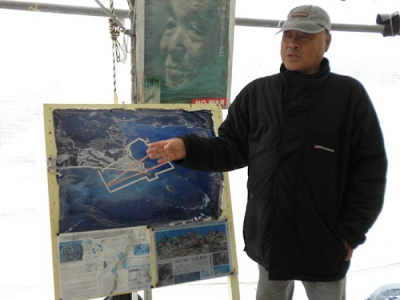 The Tent Village “Mayor” Toyama Sakae explains the history of protest at Henoko. Toyama is pointing at the “V-shaped Runway Plan” in the 2006 agreement between Japan and U.S. officially described as a “replacement facility” of Futenma Air Station.

We join the rest of the members of the Network for Okinawa in extending heartfelt condolences to all Okinawans, especially the residents of Henoko.

Yumiko Kikuno’s essay, “Henoko, Okinawa: Inside the Sit-In,” published at The Asia-Pacific Journal on Feb. 22, 2010, describing her visit to the small coastal village in northern Okinawa with Satoko Norimatsu, pays tribute to Mr. Toyama and his legacy:


On the rainy and cold Christmas Day of 2009, we got lost several times driving down the winding narrow roads towards Henoko, a small fishing village on the North Eastern shore of Okinawa Island, about a two-hour drive north of the capital, Naha. We were looking for the “Tent Village,” where activists were sitting in to protest against the government’s plan to build a new US Marine Corps airbase as a “replacement facility” of Futenma Air Station. Yes, this issue has been at the centre of the news reports in Japan for the six months since the new coalition government took power, but do we really know what has happened for the last eight years in and around this tent, on and off this coral beach, and in the ocean where endangered marine mammal dugongs come by for feeding? The victory of Inamine Susumu, the anti-base candidate in the January 24 mayoral election of Nago, where Henoko is located, was anticipated but was not known yet when the 40-minute lesson on the history of Henoko activism was given inside the tent to two visitors from the mainland and from overseas. Thinking back, the protesters at Henoko were among the citizens of Nago and Okinawa who served as advocates of democracy during the thirteen years of chasm between the pro-base government of Nago and the popular will opposing the new base, expressed in the 1997 plebiscite. In the Western world, the sit-in by the workers of Gdansk shipyards is well-known as one of the longest in modern times, and one that launched the transition to democracy in Poland and helped end the Cold War. But the multi-year Henoko “sit-in” story is little known outside of Japan, if not outside of Okinawa. Here is the first short account from “inside” the movement by one of its stalwarts.

Okinawa used to be the independent Ryukyu Kingdom, blessed with a bountiful environment and friendly trade relations with many other Asian countries. In March 1609, Satsuma-han (now Southern Kyushu Island) invaded the Ryukyu Kingdom. In 1879, the Meiji Government forced the Kingdom to surrender Shuri Castle by means of the “ Ryukyu Disposition,” which brought down the curtain on the Ryukyu Kingdom. Ryukyuan culture was subsequently lost under the assimilation policy of the Japanese government. Towards the end of the Asia-Pacific War, war was forced upon Ryukyu Islanders in the Battle of Okinawa, in which 200,000 lives were lost, including over 90,000 local civilians who were killed or forced to commit suicide. Today, Okinawa is burdened with 75% of all U.S. military bases in Japan. It seems so unfair that the Ryukyu Islands have had to endure such a tragic history. I want to bring my heart closer to Okinawa and its people, especially in light of the “Futenma Base Transfer” controversy.

On December 25, 2009, I visited “Henoko Tent Village” in Okinawa, with Satoko Norimatsu, Director of the Peace Philosophy Centre, a peace education centre in Canada. The “village” has acted as a base for the 13-year long nonviolent anti-base movement. On the day we visited it was raining, which made Henoko beach look like it was crying. We were welcomed by Toyama Sakae, the “mayor” of Henoko Tent Village, and by other activists, including Nakazato Tomoharu, “Yasu-san,” and “Na-chan.” Mr. Toyama invited us to have a seat and proceeded to explain the history of the movement to save Henoko.

NO Base Stories of Korea said...

We, Koreans would like to send our deep condolences to people in Okinawa for the death of Mr. Toyama Sakae, mayor of Henoko. His great spirit and hard work should be remembered by the people in the Asia Pacific who are resisting in solidarity against the U.S. military strategy to dominate Asia.