Released on November 16, Tessa Morris-Suzuki's To the Diamond Mountains: A Hundred-Year Journey through China and Korea could not be more timely.


Tessa Morris-Suzuki is the most important writer of Northeast Asia today.

Told through a historian's eyes and with a humanist's compassion, To the Diamond Mountains achieves an artful balance between the geopolitical concerns swirling around the region and the lives lived there now, particularly among North Koreans. The book lucidly blends together ancient pasts with present realities, presenting a subtly powerful case that those who would fail to understand the layers of Northeast Asia's deeply interwoven whole are playing with fire. 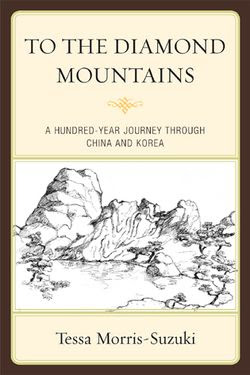 To sample this travelogue/history that creates an illuminating, multi-dimensional portrait of Korean peninsula, read an excerpt at The Asia-Pacific Journal.

(Diamond Mountain (Kŭmgangsan) is one of the best known mountains in North Korea. Its name means "a firm heart in the face of truth." Between 1998-2010, Pyongyang allowed South Korean tourists to visit (by ship and bus) the craggy, wild, relatively untouched scenic area. In 2002, North Korea separated Diamond Mountain from Kangwŏn Province and created a a separately-administered tourist region, allowing South Korean conglomerate, Hyundai, to operate hotels there. Over a million South Koreans visted the area, but in 2008, after a South Korean woman was shot, when she allegedly entered a military area, Seoul banned further travel there. In 2010, after South Korea blamed the North for the mysterious sinking of the Cheonan, Pyongyang seized the South Korean hotels.)
Posted by TenThousandThings at 6:00 AM
Email ThisBlogThis!Share to TwitterShare to FacebookShare to Pinterest
Labels: books, Korean Peninsula, Korean War, mountains