As I approached the offices of the Foreign Affairs Ministry to participate in a human chain event advocating justice for “comfort women”—the euphemism for women (many of them Korean) who were abducted into wartime sexual slavery for the Japanese Imperial Army—I was shocked to hear lewd messages blaring from multiple directions via deafening loudspeakers. Many, many times louder than the shameful commentary broadcast by members of the uyoku (ultra-rightists) during the recent Fukushima women’s sit-in, these comments were no less disturbing: “You’re all liars. These women were just prostitutes!” “What about the abduction issue? How dare you Koreans demand compensation!” “And you pitiful Japanese who are out here supporting them? You must secretly be Korean!”

Deeply shaken by what was going on around me, I made my way to join the human chain. I felt better to see that it was enormously long—drawing, I later learned, some 1200 to 1300 participants. On the way, I was also pleasantly surprised to see that the tents which had been in place during the Fukushima women’s sit-in were still very much intact—serving to give voice to both the ongoing anti-nuclear and Occupy Tokyo movements. I stopped for a moment to pick up flyers and give a small donation, and saw that the woman staffing the booth was in tears. “This is so shameful,” she whispered. “There are women who have traveled from Korea to be here today, and now they have to listen to this ugly abuse.”

I tried to comfort her, saying that the Korean women surely were grateful for the presence of numerous supporters and allies, such as herself—and that ultimately, those hurling the verbal tirades were injuring themselves more than anyone else. While I wanted to add that the women from Korea were also unlikely to understand exactly what was being said, the reality was that any who were old enough to remember the Japanese occupation were indeed likely to speak the language due to its forced wartime usage. 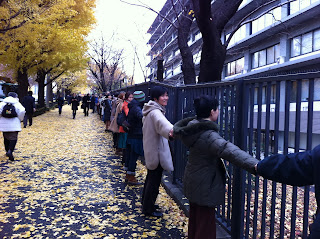 
The event was being held to commemorate the 1,000th weekly demonstration held outside the Japanese Embassy in Seoul every Wednesday since 1992—rain or shine—to demand that the Japanese government officially apologize and provide financial compensation to the so-called "comfort women." A press release for the action reads:


More than 20 years have passed since Kim Hak-Sun first declared on August 14 1991 that she had been forced to serve as a “comfort” woman (sex slave) by the Japanese Army in Korea during World War II. Other women subsequently came forth, and the following year demonstrations began to be launched every Wednesday in Korea to call for a resolution to the issue of sexual exploitation by the Japanese military. December 14 2011 will mark the 1,000th such demonstration.

Former “comfort women” endured systematic military rape and great pain and humiliation during wartime, and many led lives of great hardship even after the war. Despite such adversity, survivors began to gather the courage to talk about their experiences and shed light on a subject previously unacknowledged. Today, the 234 women who came forward are now over the age of 80, and many of them have passed away greatly disappointed that the issue still had not been resolved in their lifetimes.

Two decades later, the Japanese government continues to ignore advisories on the issue given by human rights bodies such as the United Nations, as well as resolutions passed by the legislatures of Korea, Taiwan, the United States, Canada, the Netherlands and the European Union, as well as the proposal by the Korean Foreign Affairs Deputy Office bilateral Japan-Korea negotiations following the August 30 2011 Korean Constitutional Court ruling.

For 20 years, despite conditions of rain, snow or scorching heat, the survivors have demonstrated every Wednesday in front of the Japanese Embassy in Seoul. To mark their 1000th weekly demonstration, and to demand that the Japanese government restore honor to these victims of military sexual violence, and issue both an apology and reparations to the women without further delay, Japanese civil society groups will create a human chain around the Japanese Foreign Ministry office on December 14, 2011. Other actions will be carried out on the same day throughout Japan and in other countries throughout the world, including the Philippines, Australia, Germany, the United States, Taiwan, Canada and Korea.

After participating briefly in the human chain, I returned to the tent to speak with activists about the day’s gathering in the context of social movements happening in Japan today. Mitsuro Sudo, a member of the anti-nuclear citizen organization Tanpoposha (“No Nukes Plaza Tokyo”), made the connections easily. “Whether we are talking about wartime sexual slavery or forced construction of military bases—which was recently likened in Okinawa to the act of rape—we must deeply consider the point of view of those being victimized,” he said thoughtfully. “The shared cause among each of these issues is the act of invasion, whether on a personal or a national level, and we must look at these problems historically in order to solve them.”

“In addition to power politics and problems connected to the market economy, which exist in many countries, one special problem unique to Japan is that of the kokutai (emperor’s organization),” he added, gesturing toward the counter-protesters, whose belligerent ranting had begun reaching even higher crescendos. “These aggressors clearly want to protect their profits at any cost, and so it’s up to the rest of us to save the children, the poor and the weak from the new atomic power holocaust that is now occurring in Fukushima.” 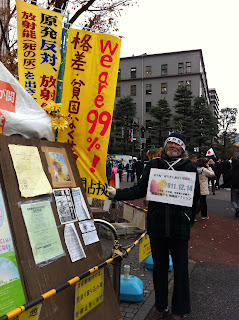 Mitsuro Sudo, continuing to fight the good fight outside the Japanese Diet offices 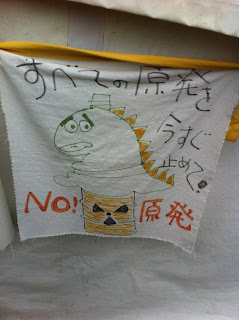 I had to leave after about an hour to return to my workplace, which was only about a five-minute walk from where the demonstration was taking place. Barely able to summon an appetite amidst the continued chaos, I nevertheless began to eat my lunch of homemade umeboshi onigiri (rice balls with pickled plum filling)—suddenly becoming aware of the ironic symbolism whereby this food is often equated with the very same Hinomaru (Japanese national flag) that was now being wielded all around me by hate-spewing uyoku. I lost my appetite for the briefest of moments before recalling a conversation I had had several years prior with a friend regarding the symbolism of the sakura (cherry blossoms), which had historically been co-opted by war sympathizers who equated the phenomena with soldiers dying for their nation in the prime of youth—but whose fleeting beauty we both agreed that we would continue to admire nevertheless. 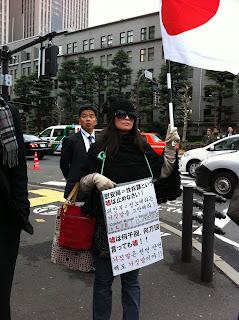 In any case, whether the “comfort women” will receive the justice that is long due to them, I cannot say. Sadly, most of them have already died without seeing this occur during their lifetime. To mark the 1,000th demonstration in Seoul, a statue of a young girl was erected Wednesday across from the Japanese Embassy to symbolize those who lost their youth in such a cruel way. Rather than use this as an opportunity for reflection, however, the Japanese government has instead issued an official complaint, claiming that the statue would “damage relations” between the two countries.

Meanwhile, the global grassroots movement to support these women continues. In Tokyo, the Women’s Active Museum on War and Peace (WAM) regularly houses installations on the issue, and groups such as the Violence Against Women in War – Network Japan (VAWW-Net) continue to pressure the Japanese government to act upon the ruling handed down by the Women's International War Crimes Tribunal on Japan's Military Sexual Slavery in 2000, which it has ignored to date. 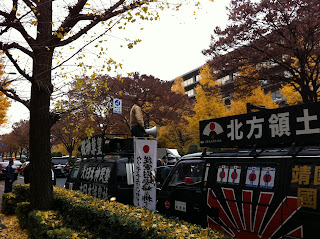 Wednesday's event was synchronized with the action in Seoul, which similarly demanded a public apology and compensation for the surviving women. In addition, solidarity events were held across the archipelago by supporters in Hokkaido, Hiroshima, Fukuyama, Fukuoka, Osaka, Okinawa and Shizuoka.

In Tokyo, more than 300 citizens attended an intra-Diet meeting, while another 100-strong waited outside the room. Seven Diet members from various parties along with non-affiliated members participated in the meeting, pledging their commitment to this issue.

For further details on Wednesday’s demonstrations in Seoul and elsewhere, see this excellent article from Asia One News.