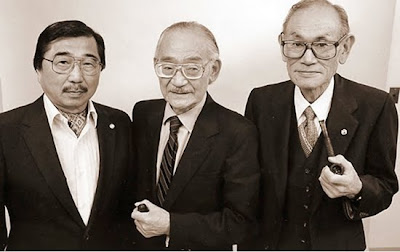 (Hirabayashi (left) is joined by fellow coram nobis plaintiffs Min Yasui and Fred Korematsu in 1983. He was the last surviving plaintiff who challenged the legality of the wartime exclusion and incarceration of Japanese Americans. Photo: Steven Okazaki

Rafu Shimpo, a bilingual newspaper for the Los Angeles Japanese American community, published a thorough and moving obituary (that does not use the euphemism "internment"):

Gordon K. Hirabayashi, who challenged the constitutionality of the internment of Japanese Americans during World War II, passed away on Monday. A resident of Edmonton, Alberta, Canada, he was 93.

The announcement was made on Facebook by his son Jay, who wrote, “He was an American hero besides being a great father who taught me about the values of honesty, integrity, and justice. My mother, Esther Hirabayashi, who was 87, also passed away this morning about ten hours later. She was a beautiful, intelligent, generous soul. Although my parents were divorced, they somehow chose to leave us on the same day. I am missing them a lot right now.”

Hirabayashi is remembered along with Minoru Yasui (1916-1986) and Fred Korematsu (1919-2005) for violating curfew and exclusion orders imposed on West Coast Japanese Americans and appealing their convictions all the way to the U.S. Supreme Court. The court ruled against them, accepting the government’s argument of military necessity.

Through a legal maneuver called writ of error coram nobis, the three cases were reopened in 1983 by a group of mostly Japanese American attorneys on the basis of newly uncovered documents showing that the government knew Japanese Americans did not pose a security threat but hid that information from the court. The convictions were overturned, thus strengthening the movement to obtain redress for former internees.

A biography of Hirabayashi, to be published by University of Washington Press, is being written by his nephew, Lane Hirabayashi of UCLA’s Asian American Studies Center, and brother, James Hirabayashi, former dean of ethnic studies at San Francisco State University.

“Gordon believed very strongly that his war-time Supreme Court case, and his 1980s coram nobis case, were both the JA community’s and the larger American public’s cases,” Lane Hirabayashi told the Rafu Shimpo. “He never felt, that is, that these were somehow exclusively his own. My understanding is that he remained profoundly grateful to all the individuals, networks, and the organizations that supported him, and never forgot that these included people of all colors, from all walks of life.

“Thus he believed that the Ninth Circuit Court’s ruling in his coram nobis appeal, vacating his conviction after more than four decades, was a victory for everyone.”

The coram nobis cases were the subject of an Oscar-nominated 1985 documentary by Steven Okazaki, “Unfinished Business,” and two books, Justice at War (1983) and Justice Delayed (1989) by Peter Irons, who led the effort to reopen the cases...

(Source for quotes: The Courage of Their Convictions: 16 Americans Who Fought Their Way to the Supreme Court by Peter Irons, 1988)

DENSHO: The Japanese American Legacy Project has a series of interviews with Gordon Hirabayashi online and a thoughtful exploration of terminology used to describe the mass detention: "Frontier Colonies or Concentration Camps? Euphemisms for the Incarceration".
Posted by TenThousandThings at 12:00 AM
Email ThisBlogThis!Share to TwitterShare to FacebookShare to Pinterest
Labels: democracy, Human rights, Nikkei, Pacific War