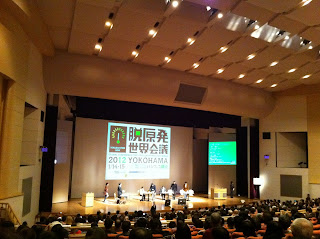 With 11,500 participants from 30 countries attending this past weekend’s two-day Global Conference for a Nuclear Power Free World, which featured a total of more than 100 talk sessions, interactive workshops, musical performances and film screenings, plus information-laden booths from numerous NGOs and citizen organizations, every individual attendee undoubtedly had their own completely unique experience of the event. A commonality certainly shared by all, however, was a vision of a world vastly different to the one that allowed the Fukushima nuclear disaster to occur—as well as a staunch determination to ensure that nuclear destruction never befalls our planet again.

Organized by several major Japan-based and international NGOs (with the Peace Boat serving as secretariat), the weekend kicked off with an opening session where one panelist after the next expressed dismay at Japan’s present nuclear policies, as well as the suffering unleashed from the Fukushima Daiichi nuclear plant accident. “Japan’s nuclear regulatory agency being housed within the economic ministry is no different than criminals living under the same roof as the police,” charged former Fukushima prefectural governor Eisaku Sato, long an outspoken critic of nuclear power.

Tetsunari Iida, the director of the Institute for Sustainable Energy Policies, spoke similarly of a “citizen revolution that has occurred as a result of the ludicrous, baseless statements that have continued to be released by the Japanese government following the Fukushima catastrophe”—a point echoed by German parliamentarian Rebecca Harms, who said pointedly, “With the majority public opinion in Japan now standing solidly against nuclear power, why the hell would Japan ever consider promoting it again?”

My own personal experience of the conference included interpreting for two amazing sessions, as well as filming several interviews for the upcoming documentary film project Uncanny Terrain, which follows organic farmers from Fukushima who have decided against all odds to continue their livelihoods—remaining on the land that has sometimes been in their families for generations, and continuing to produce food while testing it for safety standards. Not easy circumstances by any means, and I greatly admired the strength and conviction of the farmers I met who had travelled to Yokohama for the conference.

Speaking of food safety, I was also quite glad to run into fellow blogger Martin Frid, whom I have corresponded with for several years but actually never yet met in person. He was recently interviewed for an article titled "Fukushima Fallout", which looks in-depth at food-related concerns in Japan following the March disaster.

The first conference session that I helped interpret was an evening panel discussion titled “Real Talk About Creating a ‘New Japan’”, which featured a lineup of many well-known cultural figures—some of whom had also participated in the recent Atomic Café event held in Tokyo in November. While the panelists acknowledged existing differences of opinion—whether to stop nuclear power immediately or phase it out more gradually, for example—they all expressed the same future ideal for their country in terms of clean and sustainable energy, media accountability, and truly democratic policies.

“(Anthropologist Shinichi) Nakazawa can serve as the researcher for this new and improved Japan, while (singer Tokiko) Kato and (guitarist/violinist) Sugizo can write its music, (advertiser Miyako) Maekita and (visualist Macoto) Tezka can create its imagery, and (broadcaster Peter) Barakan can be its announcer!” they offered enthusiastically, referencing each of their own individual talents while reminding audience members that each one of us similarly has a role to play in contributing to this new future. The panelists also spoke supportively of the fledgling Greens Japan political party, which aims to put forth its first congressional candidates in 2013. 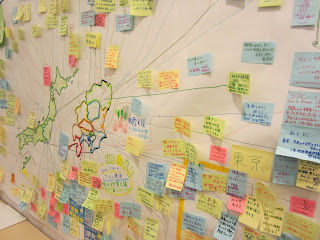 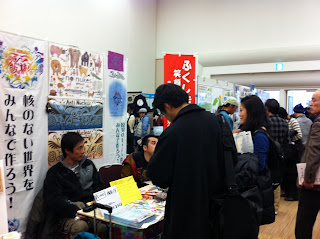 The second session for which I assisted with interpretation was a Sunday afternoon event in the Global Discussion room titled “Lessons from Chernobyl and Fukushima”, where speakers from both regions shared their experiences in order to learn from one another and create a network of solidarity.

Anton Vdovichenko, who runs a Russian NGO for Chernobyl youth, explained that after the local economy was devastated by the accident, many adults lost their jobs and turned to drinking—which in turn often meant that their kids ended up in the streets doing likewise. He explained that his NGO organized activities to guide young people toward healthier futures—and that he would be on hand to offer guidance in case the young people of Fukushima began to experience similar hardships.

This was followed by a moving speech from Fukushima mother Mika Takamura, who shared her confusion at receiving absolutely no reliable information or directives from the government during the critical hours, days and weeks following the nuclear accident—as well as her pain at being unable to send her five year-old outside to play in their hometown of Minami-Soma, which borders the exclusion zone. “I am also unable to obtain a whole body (radiation) counter for my son because he does not meet the age requirement of six years,” she said, her eyes and voice displaying obvious anguish.

Mexico-, Brazil- and U.S.-based photographer Jan Smith rounded out the session, sharing his experience of traveling to Chernobyl following the 1986 nuclear disaster—and adding that he now saw similarities with Fukushima in terms of the human stories that had fallen through the cracks of both media sensationalism and government cover-up following the disasters. His excellent analysis of what he witnessed and experienced in Fukushima may be read here.

Additional conference highlights—among many, many others—included sessions connecting the experiences of hibakusha from Hiroshima and Nagasaki with those of Fukushima, various booths and tables to collect signatures for the presently ongoing citizen referendum on nuclear power, a room exclusively for Fukushima citizens to share their experiences since the disaster and network with others, a demonstration parading through the streets of Yokohama with the message of a nuclear-free world, and countless personal statements where everyone from musicians to academics to politicians shared their strong desire for a world where nuclear-related suffering exists no longer. 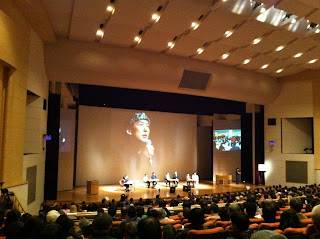 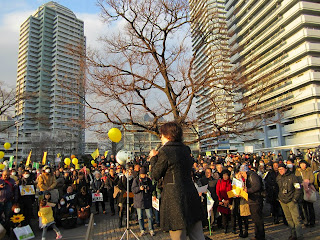 
The weekend’s closing session included a lineup of speeches that were just as fiery as those from its debut—perhaps even more so, since everyone had since had time to become even further inspired by the intense energy generated during the weekend’s incredible lineup of events.

“This conference hall is overflowing with passion,” said emcee Tomoyo Nonaka, the former CEO of Sanyo Electric who now presides over the environmental organization Gaia Initiative. “While 3/11 made it clear that Japan was not living under a democracy, we are now standing at the threshold of truly being able to create a democratic nation for the first time in our history.”

This was followed by a chant from Abacca Anjain-Maddison, a former Marshall Islands senator who has campaigned long and tirelessly on behalf of the suffering caused from repeated nuclear testing by the U.S. government. In a sense echoing Nonaka, she said, “The words that I just sang refer to the energy exerted when a mother is giving birth.

The energy that I feel here tonight in this room is the very same.”

The powerful conference declaration may be read here, and videos may be watched on the event’s official television channel. Concrete ideas and proposals generated throughout the conference have also been compiled within an online resource titled the Forest of Action, to which ongoing contributions are encouraged. 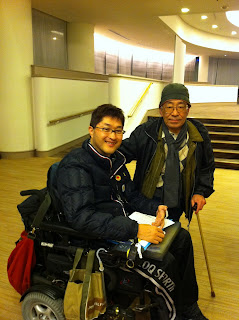 Conference attendees Noboru Imamura (left) and Hito, both seasoned activists for disabled rights and other social causes. "Issues facing radiation survivors and disabled individuals have the same structure and root causes: Disrespect of human rights, empty rhetoric, and complete lack of responsibility," explained Imamura. "We must continue connecting different social movements in order to attain true justice for everyone."

No doubt Fukishima was a terrible tragedy, beyond horrible. However, the question we must honestly ask ourselves is what will replace nuclear? Will it be gas, or even worse coal? Coal is a horribly environmentally destructive fuel source. There has to be a clear plan for replacement of nuclear.

Thanks for the comments, greeninvestments (is that your name?). I think everyone agrees that we should not replace nuclear energy with other dirty and dangerous technologies, but should look to clean and sustainable sources--something that will require a commitment to investing in new areas.

In addition to the obvious sources of wind, solar and hydropower, this article gives an interesting perspective on Japan's abundant potential for geothermal energy generation:

Hi Kimberly: Not my name, just a website and what I believe in:) All of those true renewable energy sources including geothermal are best, however, the global community must be realistic that these renewables will simply not reach reach sufficient scale over night. There has to be some kind of transition. Natural gas is not perfect, but its 10 times better than coal and could be a great bridge to the future for the industrialized world until renewables are sufficiently mature. Although some might object to even this, just keep in mind the old expression - "the great is the enemy of the good"....

By the way Kim, if you haven't already, you should list your blog at www.bestgreenblogs.com, its a great site. Green Investments

Fortunately renewables are mature. The only thing keeping us back is ourselves and those with vested interests. You may be interested in watching some of the presentations given during the conference and review the blog I created after the trip (http://www.ontario-sea.org/Page.asp?PageID=122&ContentID=3524).

There is no business case for nuclear. There is no moral justification for it either.

You may also be interested in reading Reinventing Fire by Amory Lovins. It provides a good analysis of the scenarios that we can play out.

It is a bit light on policy mechanisms neglecting to mention the power of Feed-in tariffs to create a stable market and level the playing field between heavily subsidized dirty energy and green energy but it is still a great read.

Many thanks for your comment and for all of the great links, Kristopher!