Japanese Farmers: “We will continue farming on Japanese soil!” 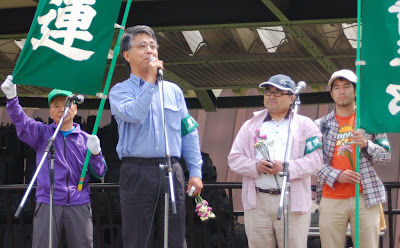 (2011 Peace Walk from Tokyo to Hiroshima: "Every year, NOUMINREN participates in Peace Walk that starts from Tokyo to Hiroshima. This year‘s walk was very special. In the opening ceremony, Fukushima NOUMINREN member, Hiroshi Miura, spoke. He said, 'My rice fields are 11 km away from the power plants, so I won’t be able to grow rice in my fields anymore in my life. This accident proved that nuclear power plants and human beings cannot coexist. I am committed to continue life-growing farming in a new place and continue making efforts to eliminate the nuclear power plants one by one!' He joined the march and called for abolition of nuclear arsenals and the change in energy policy. Photo: NOUMINREN)


“We will continue farming on Japanese soil!”
Tuesday, 28 February 2012

NOUMINREN Youth held its 20th conference in Tokyo on February 11th and 12th this year. Approximately 100 people participated in the conference (the largest ever). For NOUMINREN, this conference was probably its most important in last 20 years as it was the first conference after 3.11 earthquake, tsunami and the nuclear plant accidents. All participants were eager to share and reflect on what they underwent after 3.11 and to use these understandings to overcome their concerns.

On the first day, a forum was held to discuss the issue, "Why we must continue farming on Japanese soil: Understanding how nuclear power plants and the Trans-Pacific Partnership might to destroy us."

In this forum, five panelists (three farmers, one food researcher, and one local community activist) presented their commitment to protect agriculture and food sovereignty of Japan.

The first panelist, Souhei Miura, reported that after the disaster and nuclear power plant accident, he evacuated to Chiba prefecture. However, he decided to go back to Fukushima to farm again. He said, “It is possible to produce safe food in Fukushima if we continue doing the checkups. Nuclear power plant accidents can happen anywhere in the world today, so why don’t I stay and farm in Fukushima, the prefecture I love the most.” This commitment moved many in the audience.

The second panelist, Sumito Hatta, the Director in Chief of the NOUMINREN Food Research Laboratory, discussed its role. He explained that the laboratory’s role is to use scientific methods to enhance the safety of agricultural products and to strengthen the fiduciary relation between producers and consumers. “This is how we can contribute to Japanese agriculture,” Sumito Hatta said.

He also stated that TPP is trying to deregulate the mandatory labeling rule for GM food. “We want to make a new project checking up GM food and the GM rape seeds that falls from shipping trucks. He also explained about the role of the radioactive detector purchased with donations from the people from Japan and the world. He emphasized the importance of sharing all data with everyone who needs it.

The third panelist, Noriyuki Takahashi, a young farmer from Wakayama prefecture, explained why he was such a strong supporter of making soil. He explained that because he wanted to produce delicious and safe crops, he realized the importance of making soil and bokashi (organic fermented fertilizer). He also described how he uses the dumped food from supermarkets to make fertilizer. In concluding, Noriyuki Takahashi stated that “Friendship between living things and soil is important. I am pursuing the farming technique that makes not only human, but every living thing happy.”

The fourth panelist, Ken Aizawa, a farmer from a heavy-snowy mountainous area of Niigata prefecture explained how much he enjoyed farming in such difficult conditions. He said that it takes 2 to 3 times more effort to do weeding on his farm and the results from harvesting are also low. However as Ken Aizawa also pointed out, in such mountainous areas, people are very bonded and he wants the bond to continue. He concluded that consumers buying domestic products will unite cities and rural areas.

After the presentations, the conference participants were divided into 10 groups and had 90-minute group discussion. The members of the groups were a mix of farmers, distributors, consumers, and NOUMINREN secretariats.

Each had a different story to share about the threat of TPP and radioactivity to our food safety.

One of the farmers said that since the accident, he has had a hard time to confidently tell the consumers that his crops are safe to eat, and so he has lost his motivation to grow. A shiitake mushroom farmer from Tako, Chiba prefecture, also shared that he is worried that radiation may be detected in his mushrooms that he planted after the accident. He explained that the direct sale to shops in his town dropped by one-third. A rice farmer from Ibaragi prefecture said that although he grows rice, he is hesitant to give the rice to his newborn baby. A vegetable farmer in Fukushima said that he feels relieved being outside of Fukushima because he does not have to hear all the discussions about radioactivity on the radio.

All the stories were something that would never have been expected when last year’s conference was held. All participants realized that they went through a really tough situation and are still facing it.

In the reception following the panel discussion, the participants talked about their concerns to continue farming and their future dreams. By talking to the people in the same generation, the participants’ dreams prevailed over their concerns and made the conference very happy and energetic to the end, and actually becoming stronger after the conference.

Earthquake, tsunami, typhoon, and radioactive crisis have hit us, and sooner or later a volcano will erupt as some of the scholars predict. But we, the NOUMINREN youth, will continue farming on Japanese soil.