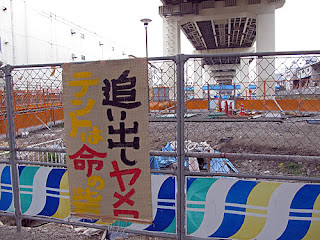 Don't kick us out. Tents are the fortresses of life!

I would also like to add an update. I was delayed in sending this notice because on the afternoon of the 8th, the planned eviction was carried out by guards, ward officials, and police. Homeless persons and their allies who had been protecting the space were forcibly pushed and carried out, and the tent structure belonging to the elderly man was destroyed.

This same man was “detained” in the park following the eviction, surrounded by guards and isolated from his friends. When folks from the Sanya Welfare Center tried to convince the ward officials and guards to leave him alone and let him join his friends, they refused to budge. Ultimately, due to the stress of the situation, a doctor and then an ambulance had to be called for the elderly man. Again, no one he knew was allowed to accompany him to the hospital. Instead, police rode with him in the ambulance. The man is in stable condition. His friends and allies are still in the park protesting the eviction.

If you would like to add your name and/or your organization's name to the petition below, please email the Sanya Welfare Center at san-ya@sanpal.co.jp with the below information.

Anyone who would like to contact the responsible parties (the Koto Ward mayor and the Waterside and Green Parks Department) directly can reach them at: 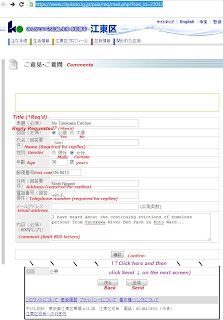 We also recommend sending your opinion to your local Japanese Embassy.

Feel free to forward/share this information.

Moves to forcibly evict homeless persons from Tatekawa River Bed Park in Tokyo’s Koto Ward are presently underway. Officials began paperwork for administrative subrogation (a legal procedure for eviction) against 15 structures located in the park at the end of last year and, on February 6th, an order to carry out the subrogation was issued against the last remaining tent, which belongs to an elderly man.

Last month, over 100 guards and workers were mobilized and violence was used to enforce the construction of a fence around the 15 structures belonging to other individuals who had already been forced out by the subrogation. Along with this, without any advance explanation, one-third of the park has been completely shut off. Confined by a fence, the remaining man has been unable to leave to go to work.

Living structures built by homeless persons in public areas such as along riversides and in parks perfectly encapsulate the paradox of unemployment and poverty in our society. They are a form of resistance, as well as a practical solution. Attempting to “reclaim” parks by simply evicting these structures without ever looking to the social and economic problems that force people to live on the street not only fails to create real answers, but also deprives countless numbers of poor people of what meager shelter they have, making survival that much harder. We, the undersigned, stand opposed to the evictions and make the following demands.

1. End the closure of the park immediately

Since January 27th, one-third of Tatekawa River Bed Park (comprising roughly 1km) has been sealed off so that no one may pass through. Homeless persons staying in the park have been locked in by a fence with only restricted entry and exit and, as a result, have been unable to go to work. Tatekawa River Bed Park covers approximately 2.5 km of land and serves as a very important community road for residents that live in the area. Numerous residents have been inconvenienced by the closure of this large portion of the park.

Furthermore, there is no legal basis for the closure whatsoever. The Head of the Waterside and Green Parks Department, Director Araki, has said that “I decided to go through with the closure at my own discretion.” Koto Ward has closed the park as a way of hiding the fact that they are in fact carrying out a hurried eviction of homeless persons from the park, and to hide the presence of the protesting homeless persons from the public. However, for the ward it is too late. The problem is already clear to anyone. The ward needs to immediately open the park to the public once more.

2. The ward must apologize for the violent acts of the guards and its ward employees

On January 27th, ward employees and guards acted violently as they oversaw the construction of a fence designed to close off one-third of the park. They lashed out against homeless persons and allies who were protesting and requesting an explanation for the sudden closure by punching, kicking, and dragging them to remove them.

In particular, the violence employed by one guard employed under Tosnet stood out; he went as far as to remove his uniform badge before engaging in abusive acts that clearly violate regulations set out in the Private Security Industry Act. Ward officials on site not only ordered the guards to act in this way but also displayed considerable malicious intent and initiated a number of violent responses of their own.

A majority of the guards are actually irregular workers burdened by poor labor conditions and low wages. The fact that the ward would use these impoverished workers to forcibly remove another group of impoverished persons from the park is extremely problematic.

The park must apologize for the violent tactics ordered and used by its staff and the guards.

On February 6th, an administrative subrogation order was issued for the park premises—where only one structure remains. The subrogation date is given as between February 6-10. The man living in this structure is in his mid-60s and is not in the best of health. He is willing to relocate but making the preparations at his own pace and it is not clear whether he will be able to finish within the time frame given. It’s pointless to carry out the forcible eviction of this one man under these conditions.

Also, new warning letters were posted on structures left behind by the other individuals who had been forced out from the park at the end of January. Does this mean that the ward tends to carry out an eviction against these structures? What does the ward think that they are gaining by repeatedly using the same tactics? We demand that the ward puts a halt to the present subrogation and abstains from conducting any more in the future.

On its homepage, Koto Ward explains the closure of Tatekawa River Bed Park as necessary “in order to protect the security of residents”. However, for a number of years already homeless persons staying within the park have developed friendly relations with local residents; greetings are exchanged and some residents share clothing and/or food.

To use violence to close the park and then blame the presence of tent structures for “the problem” threatens spoil the relationship between homeless persons and neighborhood residents. In Koto Ward, there are a number of incidents of youth attacking homeless persons.

On December 11, 2011 one man sleeping in a Koto Ward park was attacked and severely injured with three ribs broken. By engaging in acts like forcibly evicting homeless persons from the park and insinuating that homeless persons are “dangerous”, the ward is only stoking “anti-homeless” flames that underlie attacks on homeless persons. The ward needs to immediately put an end to such fear mongering.

5. The ward must be held accountable for the underhanded nature of this eviction, and agree to direct and serious discussion

Prior to this recent series of evictions, the Riverside and Green Department at the Koto Ward Office had repeatedly assured that they would hold talks and refrain from using force. Assured by these promises, homeless persons in the park had moved to a new location in the park so as to not get in the way of construction.

Little did anyone realize, procedures for the issuance of an administrative subrogation for an eviction were already underway. To act in such a way is extremely underhanded.

The ward must take responsibility and apologize for acting in such an immoral fashion. It must also engage in discussion regarding the current situation while assuring the public that it will never again undertake such deceitful practices.

6. We object to local re-development that drives out the poor

The eviction at Tatekawa River Bed Park is taking place as redevelopment is unfolding in surrounding areas.

In preparation for the opening of Sumida Ward’s Sky Tree in May, there has been a pronounced increase in evictions of homeless persons and environmental “upgrading” in Koto and other neighboring wards.

In Sumida Ward, guards are known to harass homeless persons by threatening, “We’ll have you out of here by the time the Sky Tree opens.” The construction that is currently taking place in Tatekawa River Bed Park is part of a concentrated effort to lure new tourists that will be brought by the Sky Tree.

The newly built Kayak & Canoe Facility at Tatekawa River Bed Park, entrusted to a private corporation, will charge recreation fees. In effect, as our traditional public commons is being chipped away and sold off to private corporations, the poor are being thrown out.

This is nothing more than an attempt to re-make the city for the wealthy alone. We are opposed to the exclusion of the poor and the creation of needless facilities purely for the sake of re-development. 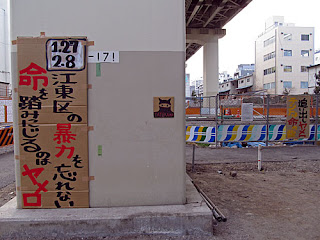 We won't forget the violence used by Koto ward. Stop trampling on our lives!