Charles J. Hanley on the Korean peninsula: "Why has this state of no war, no peace dragged on for 60 years?" 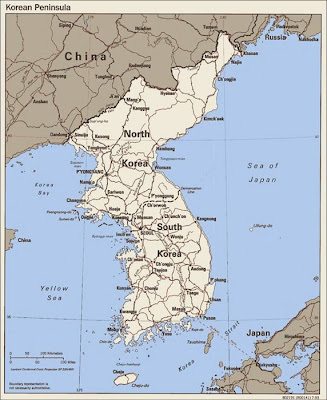 This 2010 article by Pulitzer Prize-winning AP correspondent Charles J. Hanley is as relevant today as when first published.

Hanley, a rare example of a journalist of integrity sticking with a tough story over the long term, asks, "Why has this state of no war, no peace dragged on for 60 years? and the answers he receives all point to world powers manipulating the Korean peninsula to maintain the Cold War status quo:


South Korean scholar Hong believes four great powers -- the U.S. and Japan on one side, China and Russia on the other -- like it this way.

A unified Korea would align with one power or the other, upsetting the regional balance, said the former Korea University president, a prominent conservative commentator.

"By keeping Korea divided, they're in fact maintaining their own security," Hong said...

Despite normalizing relations with Moscow, Beijing and Vietnam, the U.S. "has chosen containment over engagement and peaceful coexistence with North Korea," he [historian Park Myung-lim] said. 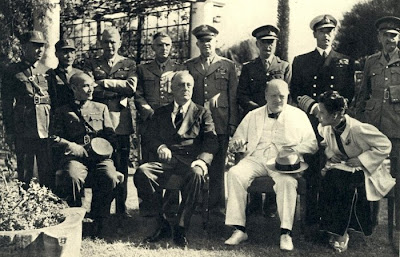 (Generalissimo and Madame Chiang Kai-shek flank Roosevelt and Churchill at Cairo "where the U.S., Great Britain, and China signed a communiqué in December 1943. The three signatories proclaimed for the first time that Japan would forfeit its control over the Korean Peninsula...The initial plan concept for an occupied Korea did not envision a peninsula separated into two independent occupation forces, but a joint trusteeship occupation similar to that which they later coordinated in Austria. There the Soviet Union, France, Great Britain, and the United States were designated areas of administration coordinated by a central policy. Korea’s occupation divided the peninsula into two separate geographic and political zones. At the December 1945 Moscow Conference the Soviet Union and the United States reaffirmed their commitment to trusteeship and agreed that Korea would be granted its independence in five years, within which time the two superpowers would prepare the Korean people for general elections to form a unified Korean government. This plan never took hold. Within three years separate governments in the south and north were formed, which paved the way for all out war in June 1950." Text & photo: The Asia-Pacfic Journal)

Democracy Now! interviewed Charles Hanley, co-author of The Bridge at No Gun Ri: A Hidden Nightmare from the Korean War, after South Korea's Truth and Reconciliation Commission released findings in 2008, "concluding the US military indiscriminately killed large groups of South Korean civilians during the Korean War in the early 1950s."

See also "North Korea's 100th – To Celebrate or To Surrender?" by Gavan McCormack and "Extended Nuclear Deterrence, Global Abolition, and Korea" by Peter Hayes.
Posted by TenThousandThings at 11:59 AM
Email ThisBlogThis!Share to TwitterShare to FacebookShare to Pinterest
Labels: China, Japan, Korea, peace