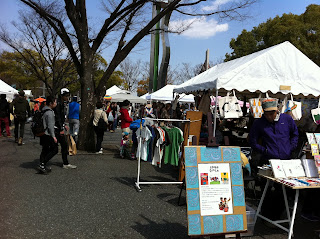 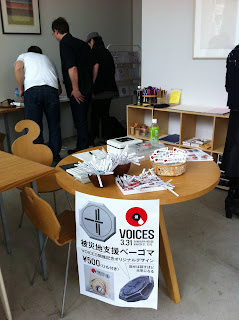 Tokyo is a city with every possible sort of culture, subculture, and social activist-oriented organization in existence. With the array of events constantly on offer, I often find myself facing a dilemma choosing which ones to attend. This past weekend was a perfect example. I was scheduled to go to the Spring Love Harukaze event in Yoyogi Park as a member of its organizing committee, but another post 3.11-event scheduled at the same time, Namida Project: Voices, caught my attention.

"Voices" was advertised as a day-long event organized by a grassroots team of artists, designers, and activists known as the Namida Project. Held at the Shibaura House multi-media event space, it was to feature talk sessions, workshops, video screenings and musical performances to raise awareness and funds on behalf of the disaster regions. Even though it would require rushing across town and possibly shirking some of my responsibilities, I was determined to attend even for an hour or two.

I made it to the screening/director’s talk of Then and Now, Paul Richard Johannessen’s poignant short film exploring issues facing residents of Ishinomaki, a disaster-hit city in Tohoku . Although I had previously seen the documentary, I was anxious to speak with Toshihiko Fujita, one of the community leaders profiled in the film, whose volunteer group I had worked with during a previous visit to Ishinomaki. I would have to miss his talk since I had to leave early, but I did have a chance to speak with him before the session began. He told me he was glad to visit Tokyo to promote local Ishinomaki businesses that had restarted following the disaster, but were now in great need of assistance to survive—including the Kotobukiya saké shop, which was profiled in Then and Now, as well as in this excellent piece by photojournalist and seasoned volunteer Mike Connelly.

Fujita added that he had come bearing an important message for Tokyoites: "Build community before it’s too late." He pointed out that neighborhoods in Ishinomaki with tight relations prior to 3.11 had community soup kitchens up and running just days following the disaster, whereas those where neighbors barely knew each others’ names remained isolated, perhaps with stockpiled goods, but without the support of human connection. With the real possibility existing for disaster to hit Tokyo at any time, Fujita urged people here to learn critical lessons from Ishinomaki’s experience.

The additional "Voices" session that I was able to attend focused on health-related issues following the Fukushima disaster. Panelists explained in detail the environmental and health-related effects of radiation, pointing out that although many people tend to downplay its ill effects by citing naturally occurring forms of environmental radiation, the reality is that significant differences exists between natural radiation and the unnatural type released during the meltdowns—thereby indeed requiring caution.

Panelist Aya Marumori, Executive Health Director of the Citizens’ Radioactivity Measuring Station (CRMS), added that she routinely faced anger from some Fukushima residents who preferred to believe government explanations that the radiation emitted from the accident was “safe”, thereby resenting her taking measurements, and accusing her of “starting rumors.” Nevertheless, she voiced her determination to continue her efforts to empower local residents. 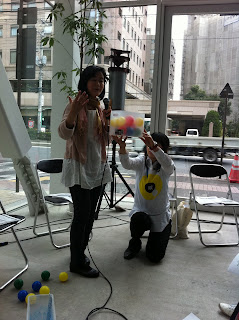 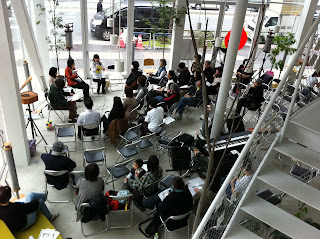 Discussion on health issues following Fukushima nuclear disaster, where panelist Aya Marumori utilizes props to explain the effects of radiation on the body


Similar messages were echoed several hours later across town at the Spring Love Harukaze event, during the panel discussion that I helped moderate on post-3.11 sustainability-related issues. Tokyo-based reggae singer Likkle Mai, whose seaside hometown of Miyako in Iwate prefecture sustained enormous damage from both the earthquake and tsunami, has spent much of the past year spearheading various disaster relief projects throughout Tohoku while simultaneously running her own record label. “It is heartbreaking that survivors have to deal not only with piecing back together their lives and livelihoods following the disaster, but must also face the realities of radiation,” she said. “I have visited Fukushima to do live performances, and although I must at times be careful about how I choose my words due to locally existing sensitivities, I am always clear about my fundamental anti-nuclear stance.”

Also on the panel were Masaru Kohsaka, who quit his job as an office worker to become an organic farmer and run his own café/bar in Tokyo; and Gota Matsumura, another Ishinomaki resident who appeared in Then and Now. He helped initiate Ishinomaki 2.0, an organization that helps to rebuild the city through grassroots projects including an art and design studio offering DIY workshops, a solar-powered café, a guesthouse, a bar, and more.

“Our project is about realizing that you can create anything that you envision, without waiting for some official to give you orders from above,” explained Matsumura. “Everything that we have achieved has been entirely from citizen-led initiatives."

This perspective was echoed by Kohsaka, author of a recent book called Downshifters, who explained that he embarked on this path to prove that it was possible to “shift down” to a lifestyle that might earn significantly less money (in his case, half of his previous earnings)—but that was far richer in terms of fulfillment. Serving as the discussion facilitator, he commented, “I think this is the common factor amongst all three of us: the fact that we have each taken life into our own hands, rather than waiting for some big conglomerate or corporation to do things for us.” 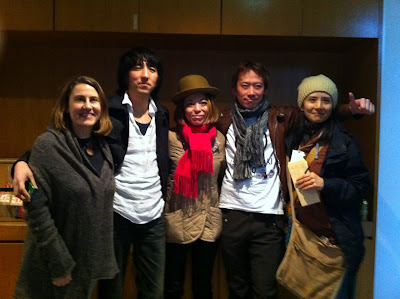 The talk was fascinating, but heavy rains and freezing winds at the outdoor Yoyogi Park venue unfortunately meant that only a handful of people ended up hearing it. Luckily, Paul Johannesenn’s film crew was on hand to film the talk for use in a longer future documentary on post-disaster Ishinomaki—footage is below. 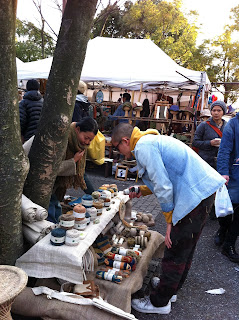 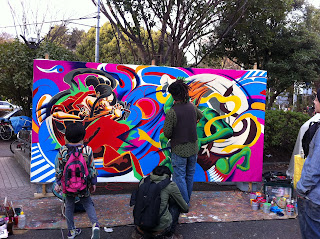 Although Saturday’s weather also meant that most of the festival was cancelled, Sunday was mild and gorgeous, with the sakura (cherry blossoms) just beginning to peek out. The day was a wonderful gathering that featured the fantastic live music that Spring Love Harukaze is famous for, as well as organic food and goods stalls, live painting, a skateboarding ramp, stages powered by fuel from PET bottle caps, a lively parade through the streets of Shibuya, appeals from Peace Not War Japan for participants to support the anti-base movements in Okinawa and on Korea’s Jeju Island, and much more.

With the new fiscal year beginning in Japan, the first week of April is traditionally a time when everyone makes a fresh start at schools, companies, and in their lives in general. The reality that many people prefer to forget or ignore—particularly those in Tokyo—is that the situation at the Fukushima Daiichi nuclear plant remains far from under control.  A sizeable earthquake could create enough damage to expose nuclear fuel rods.  This would result in unthinkable levels of radiation exposure over a wide area, including the capital.

To borrow metaphors from the titles of these weekend events, it is hoped that the voices of those in Tokyo and Tohoku were able to reach one another along the harukaze (spring winds), with the former being more aware of ongoing hardships for those in the disaster regions while simultaneously re-thinking their own futures in more sustainable terms. 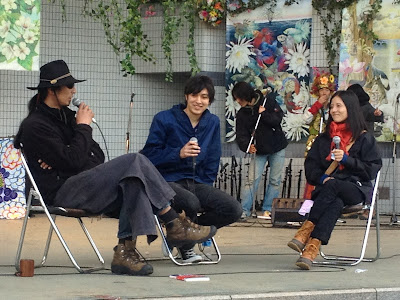