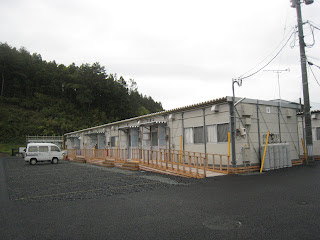 Tuesday marked the 1½-year anniversary of the March 2011 earthquake, tsunami and nuclear disasters that devastated the Tohoku region, with confirmed deaths standing at 15,870 and 2,814 people still missing.
An additional 1,632 people died of disaster-related causes, including fatigue and poor health while living in evacuation shelters.
Some 343,000 people still live in about 136,000 temporary housing units, including private properties rented by the government...
A population drain has been a major problem in the disaster zone because many who evacuated have started new lives elsewhere and have no plans to return.
In Pacific coastal areas hit hard by the tsunami, authorities have been slow in preparing housing sites for collective relocation to safer ground.
Reconstruction has been particularly slow in Fukushima Prefecture amid the triple-meltdown disaster at Tokyo Electric Power Co.'s Fukushima No. 1 nuclear plant, which spewed massive radioactive fallout. And the effectively nationalized Tepco has been slow to mete out damages payments.
A number of municipalities in Fukushima Prefecture plan to construct "temporary towns" for evacuees to help them assemble outside their hometowns, but they have made scant progress.
Official data show that about 71,000 people from Iwate, Miyagi and Fukushima prefectures had evacuated outside their prefectures as of August, including about 61,000 from Fukushima alone.
In Sendai, which is now home to more than 3,000 households of evacuees from outside the city, efforts have been made by the local social welfare council to put together residents hailing from the same localities...

As for homes for disaster victims, construction has begun on only 470 houses out of some 23,000 units planned to be built, while 24 homes have been completed. The construction of some 15,000 homes is not expected to be completed by the end of fiscal 2013, which is the deadline for evacuees to move out from temporary housing complexes. While some 21,500 homes in about 310 districts in 26 municipalities are planned to be relocated under the anti-disaster collective relocation promotion project, the relocation of only about 8,600 homes in some 150 districts in 18 municipalities has been given the green light from the central government.

One of the best close-up sources of English-language information on 3/11 survivors we've found is at Kyoto-based Solidarity with Tohoku's blog. The group is engaged in consistent support at multiple levels for the people of Tohoku.

...more than 300,000 people lost their habitual hometowns. These coastal people now mostly live in temporary container housing built for them by the government at the edge of towns and villages in the hilly interior of the country. However, little is done to socially integrate these displaced people into the culturally different rice-farming communities of the interior regions of northeastern Japan. 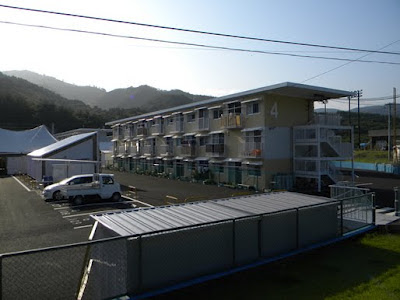 Shigeru Ban + Voluntary Architects Network + MUJI's Container Housing in Onagawa, Miyagi.
Photo: John Tubles, Archinect blogs
Apparently old shipping containers are being marketed worldwide as low-cost housing for migrant workers and trendy habitats and commercial buildings (restaurants, art galleries) for the economically privileged. This article published in August at an online design magazine reports on shipping container work camps for temporary oil field workers in Texas and a UK shipping container mobile hotel.
Why shipping containers? Is there a surfeit of them? The article cited above and comments at this architectural discussion forum say this is the case. Shipping containers are being marketed as housing and commercial units in countries with negative trade balances with China (where they come from) because these containers travel one-way; it's expensive to ship them back to China empty from the US & Japan.
However, their use for habitation has raises issues, especially when addressing their suitability for long-term or even short-term (depending on the condition of the container) temporary housing.
Steel conducts heat and cold therefore shipping containers used as homes in environments with extreme temperature variations (Tohoku winters) will normally have to be better insulated than most brick, block or wood structures. In temperate climates, moist interior air condenses against the steel, becoming clammy and forming rust unless the steel is well sealed and insulated.
Of more concern, Brian Pagnotta at Archdaily says "...the coatings used to make the containers durable for ocean transport also happen to contain a number of harmful chemicals, such as chromate, phosphorous, and lead-based paints. Moreover, wood floors that line the majority of shipping container buildings are infused with hazardous chemical pesticides like arsenic and chromium to keep pests away. The entire structure needs to be sandblasted bare, floors need to be replaced, and openings need to be cut with a torch or fireman’s saw. The average container eventually produces nearly a thousand pounds of hazardous waste before it can be used as a structure. All of this, coupled with the fossil fuels required to move the container into place with heavy machinery, contribute significantly to its ecological footprint."
This is a photo of a temporary shipping container shelter in Tanohate in Iwate prefecture (the entire village was washed into the sea) that does not look it meets basic standards.
Martin Frid of Kurashi (who is taking a closer look) responds:

What I saw and photographed in June 2011 in Minamisanriku looked very temporary, clean and organized. We stopped there briefly to open our vans and many people emerged who appreciated the clothing, books, candy, food.
What I heard was that some people rejected the design and the sterility of the environment, but for some, it is the only way to manage. I also saw the large water tanks and sewage systems that go with this setup. Camps (if that is the right word) are often located near schools or on other public land, but residents in the neighborhood (in normal housing, untouched by the tsunami) may have complaints too, I don't know. Obviously the entire supply side, including stores and banking and postal services are another huge issue.

There are some permanent housing projects, including this beautiful collaboration between Rias no Mori and Kogakuin University. John Tubles of Archinect notes, "This community of 11 units perched atop a hill overlooking Shirahama Coast. According to one of the residents the not only the thought of permanence is comforting, but as well the tangible familiarity of these materials contribute to the easiness of living in place that was severely affected by the disaster." 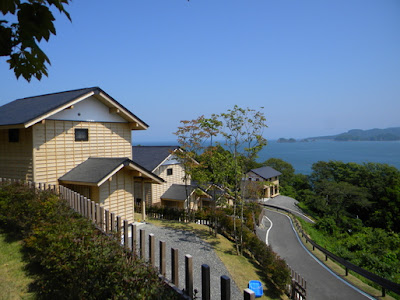 "A permanent housing community aimed towards building “re-normalizing” the life of victims by creating a permanent housing unit that utilizes as much traditional material (ie. domestic wood beams+columns, slate and plaster) and carpentry as possible. A collaboration between Rias no Mori and Kogakuin University, this community of 11 units perched atop a hill overlooking Shirahama Coast." Photo: John Tubles, Archinect blogs
However, Tubles adds that isolation is also an issue at this scenic site as well as Ban's project in Onagawa:

Both are away from any form of community amenities like shopping, civic buildings or place of work. Moreover locating housing communities on hilltops and making it a viable solution demands for higher density, therefore more housing units and adequate social spaces takes the back seat.

For example, when I visited the Onagawa housing facility, there are designated social spaces that were locked and not used because of the lack of managing personnel, and the main covered public space is only really utilized during market days which is once a week. So often young children are not out playing and socializing with neighbors instead they are limited within the confides of their housing units.

Posted by TenThousandThings at 11:30 PM
Email ThisBlogThis!Share to TwitterShare to FacebookShare to Pinterest
Labels: 3/11, Japan, Tohoku

Either I’m confused or the name “Ex-Container” is a bit misleading. The Ex-Container Project site (http://exc.ysmr.com/container_e/) says that the Ex-Container, rather than a reused shipping container, is an “architectural structure utilizing ISO shipping container format.” It doesn’t seem likely that these new container units would be plagued by the problems of toxins, lead paint, etc. found in old containers (but I could be wrong – outgassing of all sorts of poisons seems to be a major problem with the materials used in the construction industry worldwide).

Thanks JT. Need to rewrite to clarify that the Ban project uses new containers. Not sure about the hundreds of thousands of other shipping container homes. Still looking for info on this; not much around.

If you look at the link of the photo not included (on Flikr), it does not appear to be a new structure...

Thanks again for the head's up. The "ex-container" name did confuse me. Still haven't discerned whether these are brand-new or refurbished containers. Old containers are being used worldwide as housing, commercial structures. In China, new shipping containers (without indoor plumbing/electricity) are rented to migrant workers for #1/day. . Looking for more info on this in Tohoku...