DiaNuke.org: Residents of Koodankulam, India protest in the sea against nuclear plant 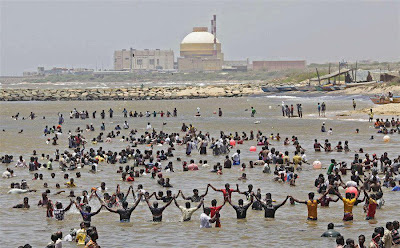 Photo: Via DiaNuke.org via OutlookIndia.com via AP

For over two decades, Indian citizens across Tamil Nadu, the southernmost part of the Indian Peninsula, have been protesting against the Kudankulam Nuclear Power Plant (KNPP). Thousands have joined in the past month because they are concerned that hot, radioactively contaminated water discharged from the nuclear plant into the sea will poison fish and other marine life. They are also concerned forced displacement after a nuclear accident, as has happened to residents of Fukushima.

Patibandla Srikant details this history in "Twenty years of resistance at Koodankulam" published at InfochangeIndia.org in November, 2011:

According to the Atomic Energy Regulatory Board’s (AERB) stipulations, a 1.6-km radius around a nuclear power plant should have no habitation, while the next 5-km radius should have a small density of population; in a 16-km radius population must not exceed 10,000. Two reactors, Unit-I and Unit-2, are ready for testing in December this year, but no rehabilitation has been carried out to date. Government after government has changed in Tamil Nadu and in New Delhi, but the plight of the people struggling against the Koodankulam nuclear power plant continues. The central government finally seems to have taken cognisance of the protests thanks to a letter from the Tamil Nadu chief minister. But people in and around Koodankulam village continue to live with the fear of nuclear risk and threat to livelihoods.

The KNPP has its roots in the 1974 Pokhran [nuclear explosion] test conducted by India. Following the test, India came under the influence of the Soviet nuclear establishment because of its isolation from the West (the US had stopped fuel shipments to the Tarapur nuclear power plant after the 1974 test). Against this backdrop the nuclear deal with the Soviet Union was discussed as early as 1979 during Morarji Desai’s prime ministership. Finally, in 1988 the Soviet President Mikhail Gorbachev and Indian Prime Minister Rajiv Gandhi signed the Koodankulam Nuclear Power Project deal.

This triggered opposition in and around Koodankulam. The proposal to draw water for the nuclear reactors from the nearby Pechiparai reservoir and to discharge waste water into the sea threatened the livelihoods of the people. In May 1989, around 10,000 people assembled to protest against the plant under the banner of the National Fish Workers’ Union (NFWU). During this protest, police opened fire and disconnected the mike, preventing anyone from speaking. However, the disintegration of the Soviet Union, Gorbachev losing power and the assassination of Rajiv Gandhi stalled the Koodankulam nuclear power plant.

Unfortunately, the nuclear project picked up steam again. Over the past decade,Tamil Nadu residents attempted legal and environmental challenges, but were blocked by manipulative tactics.

Indians have engaged in popular resistance against nuclear plants throughout the country, but, as in Japan, they are up against "economic growth-oriented development" that require national sacrifice zones that will destroy natural environment and victimize locals. Srikant explains:

In the context of globalisation, government after government in India has pledged 8-9% growth rates. Such growth rates would naturally require more energy for consumption. Given increasing awareness of environmental issues, nuclear energy is often perceived as a viable alternative to high-polluting thermal power plants and big dams.

It is in this context that increased investments in nuclear power plants need to be seen. In spite of the high costs and risks involved, successive governments showed keen interest in pursuing nuclear energy.
Such a pursuit of growth rates is putting an enormous burden on many people, particularly the marginalised sections of society – rural populations, tribals, dalits, women, the poor and others. Big projects like nuclear power plants are posing a threat to the livelihoods of these people, while putting them in a hazardous situation in the long run.

Therefore the people of Koodankulam are fighting for their survival. During a brutal repression over the last two days by police, Anthony Samy, a fisherman, was killed.

Japan's ongoing nuclear melt-throughs have not only shocked almost everyone in Japan into nuclear-free action, but have spurred others everywhere, including those were previously silent about the nuclear radiation in their backyards, and those who have long been actively resisting nuclear power, as the people of Koodankulam, to see the interconnections of nuclear issues across borders and to work for a nuclear-free world. 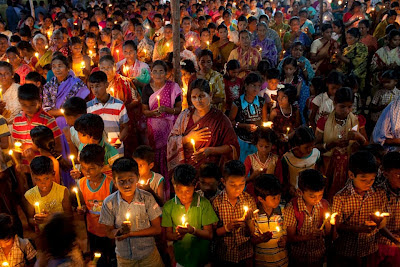 On Aug. 7, 2012, people of Koodankulam, India praying for the
victims of the atomic bombing of Hiroshima
"We have chance to save Koodankulam...."
Photo: Amirtharaj Stephen, Dianuke.org

DiaNuke articles, including those by Tokyo-residents Ruthie Iida and Jacinta Hin on the weekly Friday night protests, support a public dialogical working through of the collective shock and trauma that those of us exposed to nuclear radiation and those threatened with nuclear radiation must deal with as we also work to make our world nuclear-free.

DiaNuke's meta-message of the primacy of humanity always brings home the common ground that unite us all. This post is a shout out of gratitude to DiaNuke for their support of the Hydrangea Movement; facilitation of deep dialogue; and a heartfelt prayer for the people of Koodakulam and throughout India, that they may live free of fear of radioactive fallout; and for the political leaders in India for the wisdom to see and hear the profound message of these nonviolent resisters spoken with the power of truth (satyagraha). 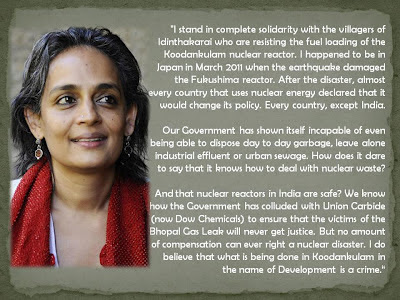 (Arundhati Roy, via Countercurrents.org)
Posted by TenThousandThings at 12:00 AM
Email ThisBlogThis!Share to TwitterShare to FacebookShare to Pinterest
Labels: Hydrangea Revolution, India, Japan, Nuclear-Free