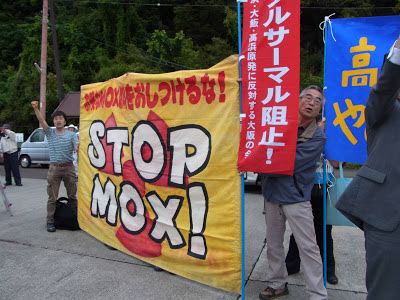 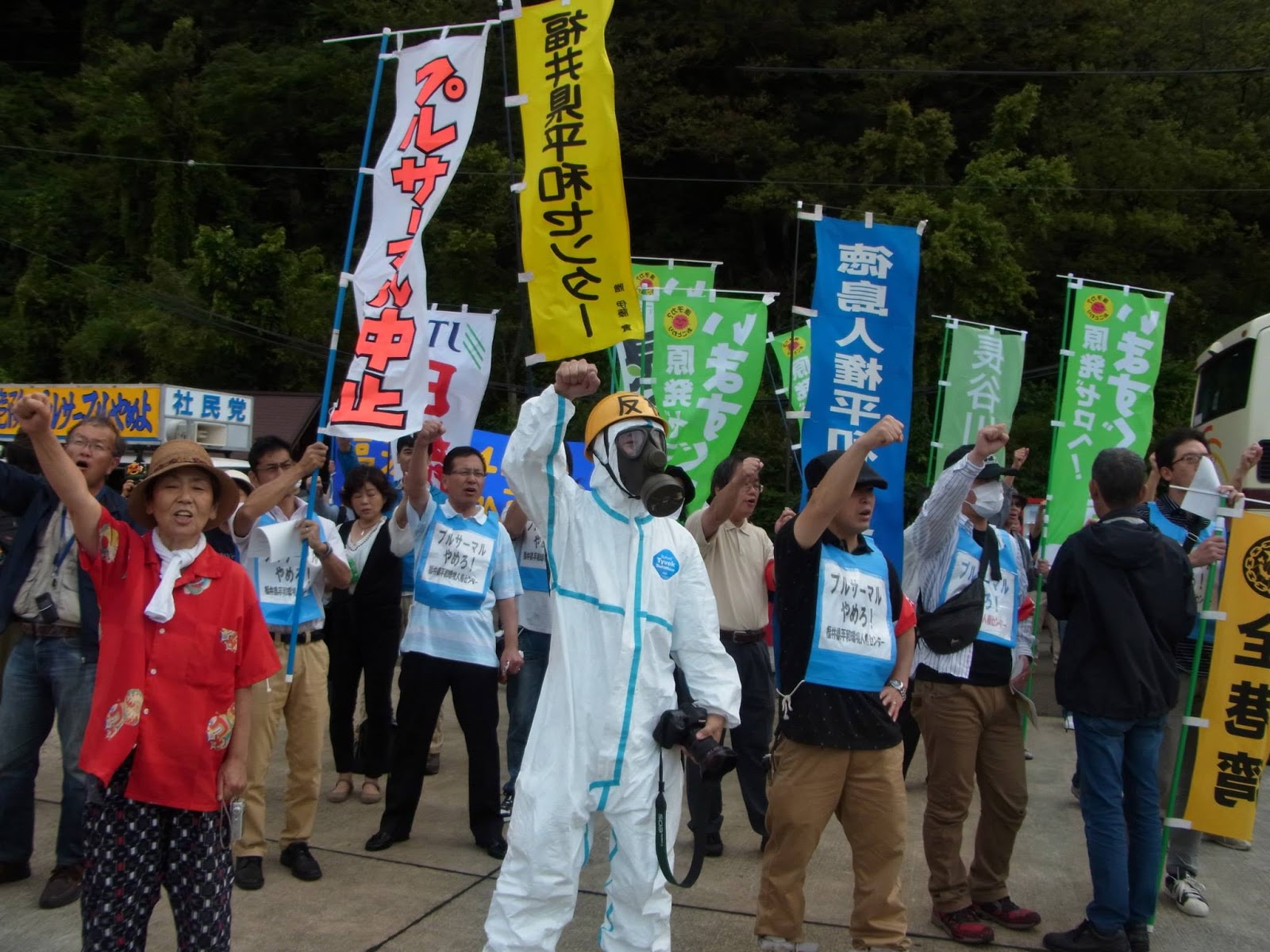 27 June 2013, Takahama Town, Fukui Prefecture, Japan-- A shipment of MOX (mixed plutonium and uranium oxide) fuel arrived at Kepco’s Takahama nuclear power plant today located in Fukui Prefecture facing the Japan Sea.
Today’s shipment violates the Japan Atomic Energy Commission's determination, issued in 2003, requiring utilities to specify the end-use of MOX fuel before it is imported.
Kepco has not been given permission to restart its Takahama nuclear power plant. On top of that, the Japanese Nuclear Regulation Authority
(NRA) has not even established post-Fukushima accident regulatory standards for MOX fuel and its use.
According to the IAEA, unirradiated MOX fuel is direct-use nuclear weapons material. This shipment adds yet another 900kg (approx.) to the already 960kg of unused plutonium in MOX fuel located at 5 nuclear
power plants in Japan.
As of today, over 70 nations have opposed MOX fuel shipments and past shipments of separated plutonium. Japan, the UK, and France have neglected to undertake an environmental impact assessment on Japanese nuclear shipments. Furthermore, no compensation plan exists for damages in the event of an accident, and emergency planning is grossly inadequate.
Many Japanese prefectures are also on the shipment route. Citizens of local governments which face the Japan Sea have petitioned Kepco and the Japanese government for information on emergency planning and compensation for damages in the event of such an accident. 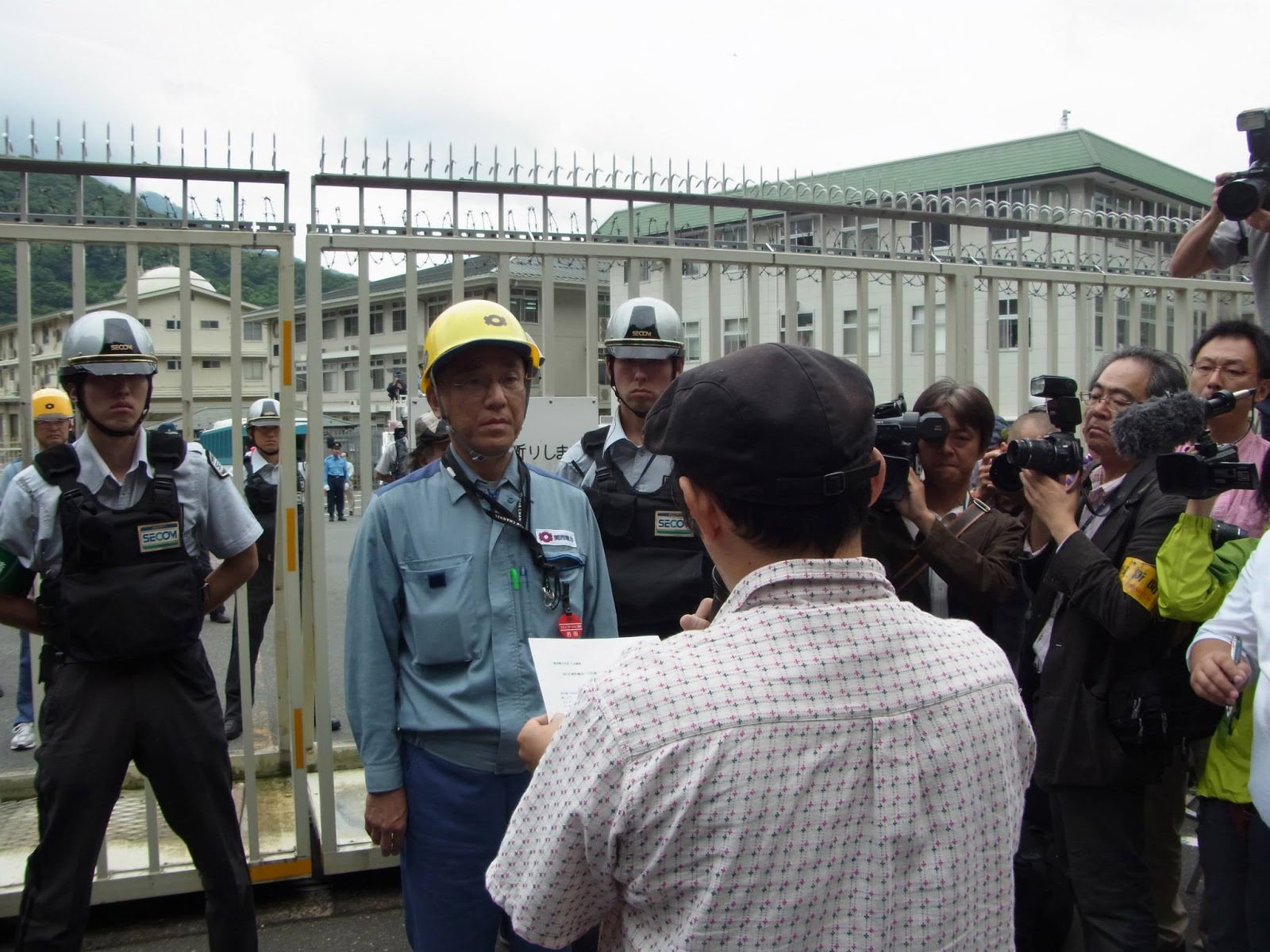 On 26 June, the Joint Action for Nuclear Free Korea composed of 78 groups including the nationwide Korean Federation of Environmental Movement (KFEM) issued a statement opposing the MOX shipment.
“Crucial quality control data for the MOX fuel has not been released by the French fuel fabricator Areva SA. Not even Kepco, its client, has been given details on the kind of impurities in the fuel and other important data that could affect the fuel safety. The French nuclear authority's remit does not include checking the quality of foreign fuel. Therefore, only Areva is privy to that information” stated Aileen Mioko Smith, executive director of Green Action.
----------
References:
12, April 2013
Joint letter to U.S. Secretary of State John Kerry regarding MOX fuel
shipment to Japan
http://www.greenaction-japan.org/internal/130412_MOX_US_State_Letter.pdf
5 March 2013
Letters sent to countries potentially on the route of the MOX fuel
shipment
http://www.greenaction-japan.org/internal/130305_Letter_en_route_MOX.pdf
Posted by TenThousandThings at 4:44 AM
Email ThisBlogThis!Share to TwitterShare to FacebookShare to Pinterest
Labels: citizen action, Japan, nuclear waste, Nuclear-Free