Via The Power of Okinawa's great blog on Okinawan music and culture: 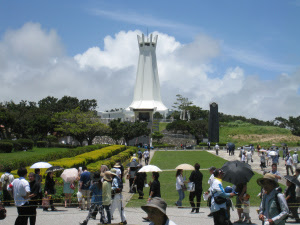 Today is Irei no hi – the day when the end of the Battle of Okinawa is commemorated throughout the Ryukyu Islands. As usual the biggest ceremony was held at lunchtime at Okinawa Peace Memorial Park in Mabuni, Itoman and I was there along with many others. It always seems to be a scorching hot day on the 23rd June and this was no exception as people gathered in the park under a blazing sun and in a temperature hovering around 32 degrees...

Masaharu Kina, the Speaker of the Okinawa Prefectural Assembly, made the most pertinent speech in which he noted that there are now 241,227 names on the Cornerstone of Peace (where the names of all those killed in the fighting are inscribed) following the addition of another 62 names this year. He also pointed out that this is a day when all Japanese should think about war even though Irei no hi is still a designated public holiday in Okinawa only. He went on:

"One of the lessons we learned from the sacrifices of countless irreplaceable lives during the war is that a people with no voice will perish. In light of our past being trifled with by national policies, and the currently unchanged situation of Okinawa, the people of Okinawa have held numerous rallies to demand the reduction and realignment of the U.S. military bases and alleviation of our burden. We have voiced our requests.

“Prompted by countless unreasonable actions against Okinawa, we, the people of Okinawa, are about to reach the limit of our patience. The non-partisan petition handed to Prime Minister Abe this January reflects our earnest collective will not to tolerate any more base burdens and to live peaceful lives.

“Under the circumstances we are here with solemnity on this day, which marks the anniversary of the end of the Battle of Okinawa. This is the day to inscribe indelibly into our hearts that such a miserable war should never happen again and to hope for a peaceful bright future.”