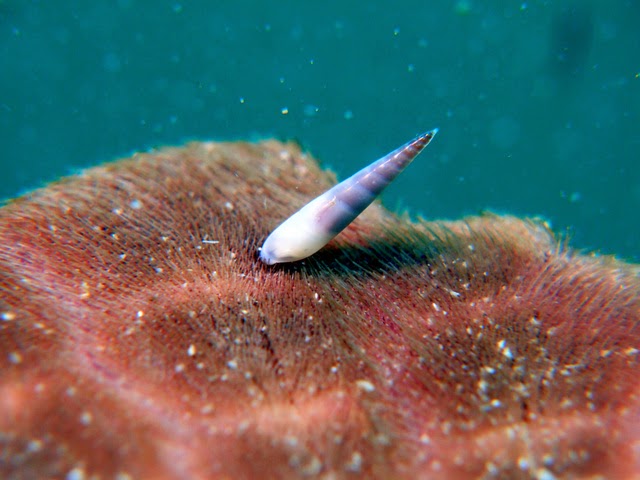 A newly discovered species of a parasitic conch
(Via Asahi, via Diving Team Snack Snufkin)

Erosion, landfill, and mass bleaching of coral has damaged much of Okinawa's coast. Over 90% of Japan's coral is in Okinawa; yet on Okinawa Island, the proportion of live coral is less than 5%.

10 years ago, 889 coral scientists from 83 countries, attending the 10th International Coral Reef Symposium in Okinawa, signed a resolution calling on the govs of Jp and the US to abandon their joint plan to construct a base at Henoko.

Coral reefs and lagoons used to be major source of cultural distinctiveness in traditional Okinawa, as with other indigenous cultures in the Pacific islands. Coral reefs are called the "rainforests of the sea" because they nourish a rich abundance of biodiversity. Worldwide, coral reefs only comprise 0.1% of the global ocean area, yet they contain a quarter of all marine species. Reef-building coral, fish, shellfish, sponges, and other marine life gather to create a unique ecosystem. They are of incomparable value for food and eco-tourism destinations.

Erosion, landfill, and mass bleaching of coral has damaged much of Okinawa's coast. Over 90% of Japan's coral is in Okinawa; yet on Okinawa Island, the proportion of live coral is less than 5%. This is part of a global trend: coral reefs will become the first ecosystem that human activity will completely destroy by global warming, pollution and landfill, in just a few decades.

The beautiful and vital Sea of Henoko and Oura Bay ecoregion is an exception to the trend of dying coral reefs in Okinawa and the world.

Takao Nogami's Asahi article outlines the incredible (largely undiscovered) biodiversity that will be destroyed if the Japanese and US governments landfill and build an airbase over Oura Bay and the Sea of Henoko:


Researchers are raising new alarms about the ecological threat posed by land reclamation work planned for the relocation of U.S. Marine Corps Air Station Futenma in Okinawa Prefecture in a bay where 10 new species have been discovered since 2007...

...these newly discovered species as well as countless others that still remain unknown could be destroyed forever by the construction work, which would not only reclaim land but also change currents and could adversely impact the coral ecosystem...

The unique structure of Oura Bay is believed to be the major reason many rare species live in the ecosystem...the entrance to the bay not only has a well-developed coral reef, but the area is also shallow. However, the bay becomes deeper, and that unusual structure is believed to allow many unknown species to survive there.

Two rivers empty into the bay and the river mouths are covered in mangrove forests and mudflats. Beyond that area is a wide variety of environments, such as seaweed beds, sandy bottoms, muddy areas and coral reef...the interlaying and connecting of such different environments, each of which has its own ecosystem...

Makoto Kato, chairman of the nature preservation committee of the Ecological Society of Japan, said Oura Bay was especially important because it contains the last coral ecosystem in Japan that has remained relatively undisturbed by human development.

"The presence of unrecorded species, such as huge sea cucumbers, shellfish and crustaceans, is but one example of how valuable that ecosystem is," said Kato, who is also a professor of environmental studies at Kyoto University. "While Japan does not have much in the way of underground mineral resources, its marine biodiversity is its true treasure. Unfortunately, political leaders in Japan do not realize that fact.

"The coral ecosystem and biodiversity of the Ryukyu archipelago is undoubtedly Japan's largest treasure trove, and land reclamation work in such waters would be an act of stupidity that would be irreversible."

Nogami's entire article is a must-read for all interested in marine life preservation.
Posted by TenThousandThings at 9:41 PM
Email ThisBlogThis!Share to TwitterShare to FacebookShare to Pinterest
Labels: biodiversity, life-sustaining civilization, nature, oceans, Okinawa