May 17: All-Okinawa Mass Rally for Preservation of Henoko, an indigenous sacred site, & Okinawa's most important natural cultural heritage site, habitat of the Okinawa dugong & the last fully intact coral reef in all of Okinawa 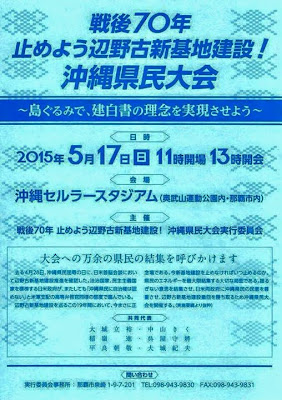 Via our friend, Dr. Masami Mel Kawamura, at Okinawa Outreach:


On May 17, a mass rally will be held at the Okinawa Cellular Stadium in Naha, Okinawa to demonstrate Okinawa’s determination to stop the construction of a US military base in Henoko and Oura Bay in northern Okinawa.

With this year marking the 70th anniversary of the end of the battle of Okinawa and of the World War II, this rally will certainly be one of the most important rallies held in Okinawa against the detrimental legacies of the war.

The people of Okinawa have suffered enough from the continuing immense presence of US military, which still occupies 18 % of Okinawa Island today. And for the last 19 years, the people have also suffered from the US and Japanese governments’ reckless pursuit of the Henoko base plan and their complete disregard for Okinawa’s democratic voice against the plan.

While the US and Japanese governments continue to do their talk in Tokyo or Washington, we the people of Okinawa know that the real struggle site that counts most is here in Okinawa. We are determined to fight through to protect our sea, our land, and our life.

Featuring Okinawa Governor Takeshi Onaga, along with other distinguished speakers, the rally will show how the people of Okinawa are united with each other and with supporters from around the world in our fight against the Henoko base construction.

Where: Okinawa Cellular Stadium, in Naha 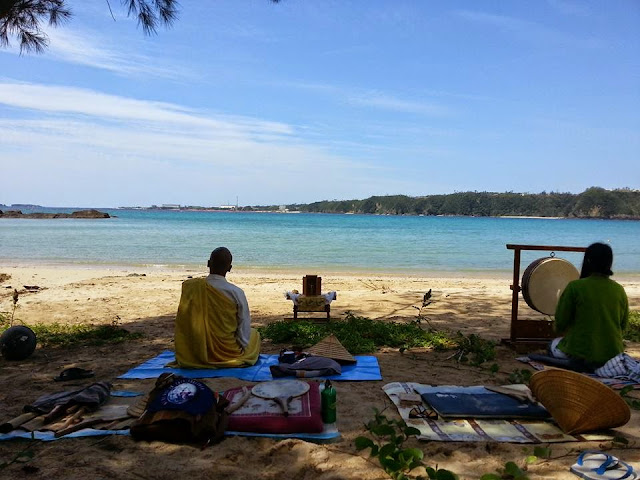 Reverend Kinoshita of Nippon Myohoji
witnessing for the protection of Henoko,
an indigenous sacred site, with shrines & rituals going back millennia,
and Okinawa's most important natural cultural heritage site,
habitat of the Okinawa dugong & the last fully intact coral reef in all of Okinawa.
(Photo via our friends at Blue Vigil in Solidarity with Okinawa in NYC)
Posted by TenThousandThings at 10:18 PM
Email ThisBlogThis!Share to TwitterShare to FacebookShare to Pinterest
Labels: animals, community, cultural heritage, democracy, forests, Human rights, indigenous, oceans, Okinawa, peace, water