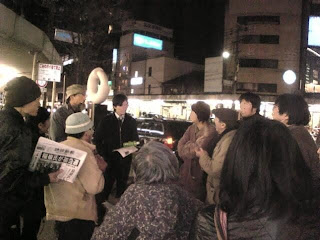 Twenty years ago, when Keiko (pseudonym) started protesting the military occupation of Okinawa, she never would have believed how much media and governmental attention the cause of the Okinawan people in removing military bases from their lands would be garnering today.

Keiko is a members of Kyoto Action, an organization opposing bases in Futenma, Henoko, and beyond that began holding Saturday rallies in the heart of Kyoto City in 2004 to distribute information about the military occupation of Okinawa, its members would never have believed 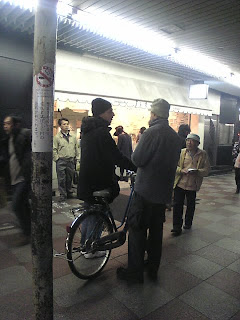 The photos above are from a Kyoto Action rally in January which included members of the newly formed Kyoto Branch of the US for Okinawa Network. A Peruvian man of Okinawan heritage and several United Stations, joined Kyoto Action members of all generations, ages 19-82, in appealing for a base-free Okinawa. Long-time member Takeichi Tsuneo proclaimed that "only through collaborating internationally will we reach our goal of a base-free Okinawa." Although the group is specifically campaigning for Okinawa, it also calls for the removal of military bases from Guam, Hawai'i and island nations.

An excerpt from the Kyoto Action flyer states:


In Heneko, where the beautiful and plentiful ocean spreads along the beach and is home to endangered species such as the dugong, both the Japanese and U.S. governments are planning to fill up the sea to construct a new U.S. military base. In the local towns, old men and women who have survived the terrible Okinawa War are still leading sit-in protest actions. They have been conducting these protest sit-ins every single day for more than 10 years. Every day, with deep devotion, they start their canoes and ships to protect their beloved sea. And even, now a desperate protest action continues against construction imposed upon them by force by our government. Now Henoko needs many more people to come help take part in their protests. They need stronger voices for opposition for more people to pay more attention.

Here in Kyoto, we too object to U.S. military base construction in Okinawa. Some people might say they don't care about Okinawa, because they can not imagine what Okinawa is like. Well, we want to end their indifference. We don't want to live lives based on tormenting others. We invite you to join our action and raise your voice against the U.S. military base construction in Okinawa.


To join the members of Kyoto Action in their activities, email no_base@livedoor.com or join them every Saturday from 5pm-630pm in front of the shopping district at Kawaramachi Sanjo. 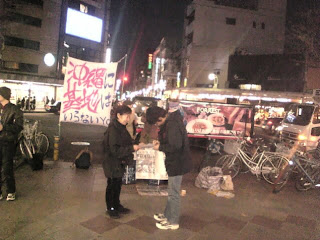 For more information about activities of US for Okinawa in Kyoto email Jennifer at teeter42@gmail.com and refer to the website for information about the Tokyo branch (http://us-for-okinawa.blogspot.com/)
Posted by TenThousandThings at 3:49 AM
Email ThisBlogThis!Share to TwitterShare to FacebookShare to Pinterest
Labels: citizen action, democracy, Japan, Jen Teeter, Kyoto, Okinawa, peace, peace networks