It is my belief that we are part of a movement that is greater and deeper and broader than we ourselves know or can know. It flies under the radar of the media by and large. It is nonviolent. It is grassroots. It has no clusterbombs, no armies, and no helicopters. It has no central ideology. A male vertebrate is not in charge.


This unnamed movement is the most diverse movement the world has ever seen. The very word "movement" is too small to describe it. No one started this worldview. No one is in charge of it. There is no orthodoxy. It is global, classless, unquenchable, and tireless. Its shared understanding is arising spontaneously from different economic sectors, cultures, regions, and cohorts. It is growing and spreading worldwide, with no exception.

It has many roots. But primarily the origins are indigenous cultures, the environment and social justice movements. Those three sectors and their subsectors are intertwining, morphing, and enlarging... This is a democracy movement...It's marked by kinship, communities, symbiosis. It's Pachamama ("Mother Universe"). It's Mama. It's the earth talking back, waking up...

The talk is now three years old––but this clip of Paul Hawken speaking at a 2006 Bioneers conference describing the collective energy of hundreds of thousands of civil society organizations made up of tens of million of people––if not more, from all over our planet–– is breathtaking and more relevant than ever.

The social entrepreneur drew his talk from his 2007 book, Blessed Unrest: How The Largest Movement in the World Came Into Being and Why No One Saw It Coming. 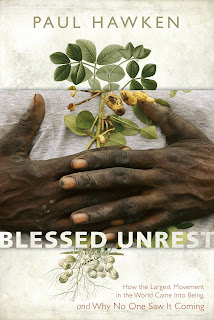 Thank you, Jean for bringing this wonderful statement into light again. Our indigenous communities across this earth have always been the caretakers and advocates for our environment + human rights.