Keiko Miyamori is preoccupied with making visible the invisible connections between people and nature across our planet. Like many other Japanese-born and Japanese-American artists, she is haunted by the historical trauma of the Second World War. The Philly-based visual artist believes that, if we can better see the interconnections that bind us together with each other and the natural world, we would be less likely to engage in the nonsensical destruction of military violence and war. Her work is a visual artistic cure for the roots of violence: alienation, competition, and fear.

Miyamori's upcoming exhibition incorporates tree rubbings and birdsongs from five different continents to evoke a sense of planetary holism based upon the idea of the supercontinent Amasia:

"Amasia is one of the possible future supercontinents that could be formed by the merger of Asia and North America. It is based on the idea that the Pacific Plate is already subducting under Eurasia and North America and the process will eventually cause it to close...

"This project will share with my related projects a common goal of helping people to experience the 'connections' that exist between all of us with our surroundings...I have struggled to come to terms with terrible events in my cultural history that happened due to lack of feeling connected to the 'other,' the 'there' rather than 'here.' I hope that my installation will allow people to feel, through the freedom of imagination, a sense of global connection..."

Keiko Miyamori: Bird Cages and the Gilded Boat
an installation with soundscape by Steven Berkowitz
Curated by Sean A. Stoops 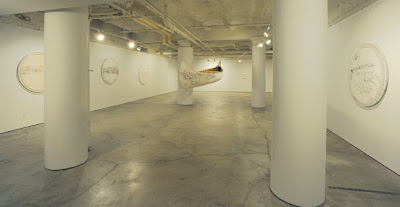 (Gilded Boat: "The old found canoe was covered with Japanese washi paper pasted tight to obtain a new uniform skin... As a contrast, the inside of the boat will be gilded with gold leaf to symbolize the “inner” energy of the human vessel, how the human’s physical shell can hold its imagination." Text: Keiko Miyamori; Photo: Kenji Takigami)

As part of the Emerging Curators Program, the ISE Cultural Foundation presents: Keiko Miyamori: Bird Cages and the Gilded Boat a gallery exhibition curated by Sean A. Stoops, featuring a mixed media installation by Keiko Miyamori with an electronic “soundscape” composed by Steven Berkowitz. The exhibition runs January 14 - February 26, 2011, with an opening reception on Friday, January 14, 6 - 8 PM.

Keiko Miyamori explores of her experiences and history through sculpture and installation art. Bird Cages and the Gilded Boat is a new installation of Miyamori’s recent sculptures and works on paper. Bird Cages Without Roofs consists of altered bird cage sculptures with open tops, implying a basic desire to escape the struggles and conflicts that keep people confined in metaphoric “cages;” addressing the dichotomy of captivity and freedom. The Bird Cages are juxtaposed with Gilded Boat, a basic wood canoe transformed into a dream-like vessel and embellished with classical Japanese art materials- washi paper with charcoal frottage from tree bark on the hull and a gilded interior of gold-leaf. Unifying the sculptures are a series of Tree Rubbings with charcoal on washi paper, created from numerous trees in five continents, based on Miyamori’s travels over the past few years. These works on paper are combined with regional grain, corn, and nuts in clear, circular frames, intimating natural cycles of trees and plants. Miyamori’s recent visits to Australia, Brazil, Japan, and Kenya were supported by grants from Philadelphia organizations- the Independence Foundation and the Center for Emerging Visual Artists.


For this exhibition, Steven Berkowitz presents a new sound art work created from tree bark - rubbing patterns in Keiko Miyamori’s installation- turning the visible markings into the musical “notes” of an ambient “soundscape.” Field recordings of specific bird songs from around the world are mixed into the aural environment. Berkowitz researched native bird sounds from the locations that Miyamori visited in her tour of five continents. The resulting multi-channel “soundscape” creates the impression in the gallery of an invisible aviary, with a chorus of birds from around the globe. Keiko Miyamori’s installation, combined with Steven Berkowitz’s audio, allude to journeys between different stages of being and natural elements: air, earth, and water.

On Thursday, February 3, 6 - 8 PM, the gallery presents- KAMIOTO: A Conversation of Forest and City, a “USA x Japan” sound performance with a live internet / video collaboration between New York City and Ryugasaki, Japan. The special event - directed by Keiko Miyamori - features electronic sound art by Steven Berkowitz, video by Hsiang-Chin Moe (both at ISE gallery in NY), and in Japan, percussion by Chikara Miura with children at Ryugasaki kindergarten from the wild Japanse cedar forest.

On Saturday, February 26, 2 - 3 PM, there will be a gallery talk with the curator and the artists discussing the installation and their work in general.

Additional support for this exhibition has been provided by:
the Independence Foundation (Philadelphia) and the Center for Emerging Visual Artists (Philadelphia) Sake Discoveries, LLC (New York City) and the Forestry Agency (Japan).

About the Artists and Curator:

Steven Berkowitz has a MFA in Photography from Tyler School of Art, Temple University and is currently a professor there, dividing his time between New York City and Philadelphia. Berkowitz has exhibited and performed in numerous art venues in the United States, Japan, and Europe. Berkowitz frequently creates sound art for gallery installations, both for his own photography and in collaboration with other artists.

Sean A. Stoops is a curator and new media artist living in Philadelphia. Stoops has a MFA in video art and curating from Transart Institute, Donau University -- an international graduate program for new media art, based in Linz, Austria and Berlin, Germany. He earned his BFA in painting from Tyler School of Art, Temple University and studied at Temple Abroad in Rome, Italy. Stoops has curated and exhibited at many art galleries in Philadelphia including: the Painted Bride Art Center, Asian Arts Initiative, International House, and Rebekah Templeton Contemporary Art. This is his first curated exhibition in New York City. See also: "Keiko Miyamori's Tsunagu Series Connects People and Nature throughout the World"