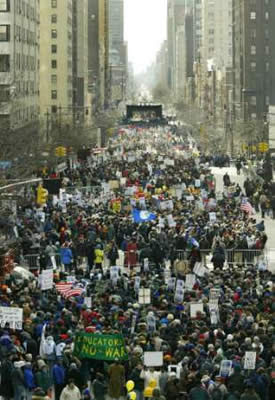 On February 15, 2003, tens of millions of people, on the streets of 600-800 cities worldwide, co-created the largest anti-war demonstration in history to protest the US/UK invasion of Iraq.

As global mass protests shake up Empire as usual—on the 8th Anniversary of Global Protest Against Iraq War—we're taking a relook at Democracy Now!'s Feb. 15, 2005 "Look at Challenging Empire: How People, Governments, & the UN Defy U.S. Power" by Phyllis Bennis, a fellow at the Institute for Policy Studies, who advises we must work to stop upcoming wars before they start.


AMY GOODMAN: Phyllis Bennis has a new book, arguing the anti-war movement has evolved into a major force for global change. The book is called Challenging Empire: How People, Governments and the U.N. Defy U.S. Power...

PHYLLIS BENNIS:...We didn’t succeed at stopping the war. But I think that would be a very partial assessment. What was created—and it wasn’t only around February 15, but that emerged as the centerpiece of this extraordinary global mobilization—was an exemplar of what it’s going to take to challenge this global drive towards empire, this drive towards war that has been so characteristic, not only of the Bush administration, but in a far more blatant and aggressive way than we had ever seen before.

It was an amazing thing, because I think what was so important was not only that you had so many people in the streets in so many different cities mobilized under one slogan in so many different languages—"The world says no to war"—but it was powerful enough that governments around the world were forced, for a combination of reasons, the pressure of their own citizens being the most important, but for their own opportunist reasons, as well, to do the right thing, even if, for the wrong reasons sometimes, to stand up to the U.S., to refuse to give in to the pressure that not only the powerful countries like France and Germany, but smaller, weaker countries, those on the Security Council, the six so-called uncommitted six, that refused to give in to U.S. pressure, under enormous threats. Chile, Mexico, Angola, Cameroon, Guinea, Pakistan. These were not countries that could ordinarily go head to head with the U.S. When there were enough of them, it forced the U.N. to do what the U.N. is supposed to do, but so rarely does, which is to stand against what its own charter calls the "scourge of war."

AMY GOODMAN: Phyllis, I wanted to stop you for a second on the issue of the U.N. Security Council right before the invasion, which goes to another controversy that the Bush administration is trying to deal with right now, and that’s the issue of domestic spying, the idea of spying on Americans.

AMY GOODMAN:: But we saw this before the invasion, and that was on the U.N. Security Council members.

AMY GOODMAN:Can you remind us what happened?

PHYLLIS BENNIS: That’s right. In the months leading up to what was hoped by the Bush administration to be a vote on a real resolution endorsing the war, a vote they were never able to get, they were spying—the way they’re spying on the American people now, they were spying on every major country in the United Nations. They were spying on U.N. missions, on U.N. ambassadors, on cars, perhaps on the U.N.’s own territory, something which is not new. We know there has been spying on U.N. delegates ever since 1948—sorry, 1945, when the U.N. was first created. But this was an extraordinary blatant effort to find out what delegations were thinking and figure out ways to pressure them.

But we know it didn’t work, and I think this is what’s important about that mobilization. It wasn’t able to succeed at making this war globally acceptable and legal. That was what the Bush administration desperately wanted, and that’s what they failed to get, because the U.N. refused to vote to endorse the war, because government stood against it, and crucially, because there was this global movement that brought millions of people, somewhere between 12 and 14 million people, what the Guinness Book of World Records said was the largest global mobilization in history. It brought those people into the streets to say no to war. And that meant that when they did launch the war, there was no question around the world that this was an aggressive, illegal war.

And the question of how to mobilize against it was put much more on the agenda. Now, of course, the challenge for us is to figure out how to make real, when the governmental opposition has collapsed, the U.N. opposition has collapsed—what we have left is the most important centerpiece, the global people’s movements against this war, how to remobilize them to take up the demand to end the U.S. occupation of Iraq, bring all of the troops home now at a time when we know there’s going to be troop withdrawals. They will probably be on a large scale but will not lead to an end to occupation, and at a time when we have to be mobilizing to prevent the expansion of the war into Iran in the face of these extraordinary threats that are going on.

PHYLLIS BENNIS: On the morning of February 15, before the demonstrations began, we had an extraordinary moment when that small group went to meet with Secretary General Kofi Annan on the 38th floor in his office at the United Nations, only moments before the rally was to begin downstairs on that freezing cold New York day. And Bishop Tutu opened the meeting, and he said to his old friend—the two Nobel Laureates, African statesmen, who had worked together for so many years—he looked at Kofi Annan across the table, and he said, "We are here today on behalf of the people that are marching in 665 cities around the world. And we’re here to tell you that those people marching in all of those cities, we claim the United Nations as our own. We claim it in the name of the global mobilization for peace."

It was an extraordinary moment. It was the last thing Kofi Annan wanted to hear, at a moment when he was under such enormous pressure from the United States to put the U.N. on the side of the U.S. war. But he refused and ultimately did say the U.S. invasion of Iraq was illegal. We have to reclaim that role for the United Nations. It didn’t last long. It was a blink in history. It was an eight-month moment, when we had the countries, the governments and the U.N. on the side of this popular mobilization, but it’s that three-part mobilization—people, governments, and the U.N.—that we’re going to have to rebuild to stop the war that’s going on now, to prevent the next war that’s emerging as we speak...