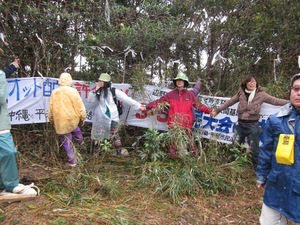 Okinawans Continue to Resist in Takae

Some animals should be endangered. Consider the V-22 Osprey. The tilt-rotor aircraft, which takes off like a helicopter but flies like a plane, costs more than a $100 million apiece, killed 30 personnel in crashes during its development stage, and survived four attempts by none other than Dick Cheney to deep-six the program. Although it is no longer as crash-prone as it once was, the Osprey's performance in Iraq was still sub-par and it remains a woefully expensive creature. Although canceling the program would save the U.S. government $10-12 billion over the next decade, the Osprey somehow avoided the budget axe in the latest round of cuts on Capitol Hill.

It's bad enough that U.S. taxpayers have to continue to support the care and feeding of this particular Osprey. Worse, we're inflicting the bird on others.

In a small village in the Yanbaru Forest in northern Okinawa, the residents of Takae have been fighting non-stop to prevent the construction of six helipads designed specifically for the V-22. The protests have been going on since the day in 2007 when Japanese construction crews tried to prepare the site for the helipads. "Since that day, over 10,000 locals, mainland Japanese, and foreign nationals have participated in a non-stop sit-in outside the planned helipad sites," writes Jon Mitchell at Foreign Policy In Focus. "So far, they've managed to thwart any further construction attempts. At small marquee tents, the villagers greet visitors with cups of tea and talk them through their campaign, highlighting their message with hand-written leaflets and water-stained maps."

It's all part of the plan that would shut down the aging Futenma air base in Okinawa, relocate some of the Marines to Guam, and build a new facility elsewhere in Okinawa. The overwhelming majority of Okinawans oppose this plan. They want to shut down Futenma, and they don't want any new U.S. military bases.

But the Japanese government has essentially knuckled under to U.S. pressure to move forward with the agreement. Building these helipads in a subtropical forest, with a wide range of unusual wildlife, is all part of the deal.

The recently re-elected Okinawan governor Hirokazu Nakaima opposes the relocation plan. And, according to Pacific Daily News, "Nakaima may actually have the authority to disrupt the plan because of his authority under the Japan Public Water Reclamation Act, which gives the Okinawa governor final authority over reclaimed land." Washington has said that it won't move forward on the deal without local support.

The Osprey is a budget-busting beast. The Okinawans don't want it. Both Tokyo and Washington are desperate to trim spending.

More background on the V-22 Osprey:

"Key Amendments to H.R.1, Fiscal Year 2011 Appropriations Bill" compiled by The New York Times. (Congressman Luis V. Gutierrez (Democrat, Illinois sponsored an Amendment To Eliminate Financing for the V-22 Osprey Aircraft (H.AMDT.13). The House of Representatives voted (326 to 105, mostly Republican, but also Democrats) against this amendment; resulting in U.S. taxpayers footing the bill for at least $415 million for the V-22 Osprey aircraft this year. So far, the Osprey has cost Americans $60 billion.)

More background information on the movement to protect Takae Village and Yanbaru Forest:

"Saving the Okinawan Woodpecker," (The Center for Biological Diversity).

Save Takae Village and and the biodiversity of Yanbaru Forest (TTT, Jan. 4, 2011).

Posted by TenThousandThings at 5:26 AM
Email ThisBlogThis!Share to TwitterShare to FacebookShare to Pinterest
Labels: military spending, Okinawa