This past Saturday June 11th, which marked exactly three months since eastern Japan was struck in rapid succession by a devastating earthquake, tsunami and nuclear crisis, citizens gathered in cities and towns the world over in impassioned demonstrations to let their government officials know in no uncertain terms that the era of nuclear power is over.

The event, known collectively as 6.11 Anti Nukes Day, included solidarity demonstrations held in Canada, France, Germany, Mexico, Taiwan and the United States. In cities across Japan, the demonstrations were of course particularly poignant given the ongoing uncertainty of the Fukushima nuclear crisis. Several events were held in the nation’s capital of Tokyo alone, where the largest drew some 20,000 people to the central district of Shinjuku in a pulsing, unbarred, and at times raucous expression of emotion.

On one hand, recent weeks have seen several positive developments that are being cautiously celebrated, including the shutdown of the Hamaoka nuclear plant (dubbed the “world’s most dangerous”), the increasing likelihood that plans will be scrapped for the Kaminoseki nuclear facility, and Prime Minister Kan’s announcement of Japan’s serious commitment to alternative energies within the nation’s future energy policy. Unanswered questions continue to percolate, however, regarding the issue of Fukushima’s fallout (both literal and otherwise) underneath the surface of mainstream public discourse, which seems to have forgotten about the crisis altogether as daily life has shifted back to “normal”.

This state of collective denial seems exactly the way that officialdom in Japan wants to keep things, judging by the number of baton-wielding police officers sent out to cover Saturday’s event—which far surpassed what would have been necessary for the ostensible purpose of “traffic control”. When I arrived for the evening portion of the Shinjuku demonstration, I was stunned to be greeted by an ocean of blue cop uniforms literally as far as I could see. This served two purposes: first, making the general public unaware of what was actually happening, since several layers of officers were surrounding the demonstrators, thereby blocking the action from view (and making it inaccessible to would-be participants); and second, giving the impression that whatever was going on was so “dangerous” as to necessitate such intense police coverage. 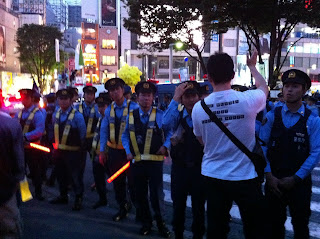 When I was finally able to join the event—after taking a circuitous route and ducking in between cops to reach it— I found instead a chilled-out atmosphere including a reggae singer performing anti-nuke songs atop a sound truck, people waving creative signs and handing out flyers, and others holding candles in silence. It was a peaceful, artistic and inspiring gathering—and the average passerby did not even know that it was going on. 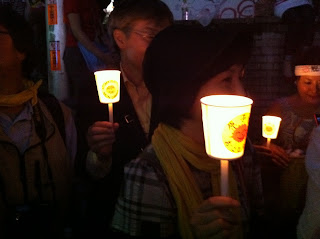 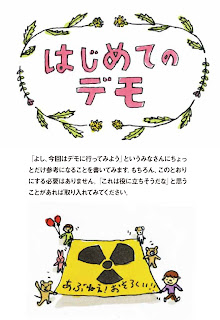 Illustrated downloadable information guide for first-time protest-goers, also available via the website of Hajime Matsumoto, who runs the Shiroto no ran ("Amateur Revolt") shop and social collective in the Tokyo neighborhood of Koenji where 15,000 people gathered in April for an anti-nuke demonstration that he organized.

Among the many other Japanese cities hosting demonstrations on Saturday was Koriyama in Fukushima prefecture, where Tokyo resident Hideaki Matsuura decided to offer support to those who have been facing the disaster more intimately. “I thought the demo would be quite big since Koriyama has suffered significant radiation damage, but I was surprised to see that there were only around two or three hundred people there—and further shocked to see that almost no one was wearing face masks,” he told me. “During speech time, however, people gave very moving appeals about how their lives have been damaged, and how they and their families continue to fear for their safety.”

He also told me that he spoke after the event with a woman who described the culture of silence and complicity that continues to reign in Fukushima whereby people are culturally obliged to follow their elders—most of whom get their information from the mainstream media rather than the internet, and thereby believe the official assurances that radiation from the plant is “safe.” As a result, she said, anyone who goes against this prevailing logic—by wearing a mask, for example, or expressing a desire to move to a safer area—risks bullying and/or ostracization from the community.

An international collective known as “Todos Somos Japon: Fissures in the Planetary Apparatus” organized following the 3.11 disaster released a statement in support of the June 11th demonstrations in Japan that included the following:


Our thoughts should go especially to the women of Japan who, we are told, are those who are most strongly opposed to the government propaganda about patriotism and sacrifice. We understand they are struggling to resist this suicidal logic, which demands their families consume radioactive products to show the world that all is well in this country and a nuclear disaster is something we can live with. Their struggle is our struggle and their resistance needs our support.

Indeed, with official information non-forthcoming regarding the actual level of dangers, average citizens have had to take matters into their own hands in order to protect their safety and livelihoods. A friend of mine who is an organic farmer and surfer living along the coast of Chiba prefecture—which lies due south of Fukushima—has purchased a Geiger counter, as have many other farmers, in order to regulate the levels of radiation that may be affecting her fields. “I moved away from the city because I wanted a more natural lifestyle, but as soon as my dream was achieved, we suddenly had to begin living with all the fears and unknowns of radiation,” she lamented. “As a surfer, the idea of having to stay away from the ocean is unthinkable. Due to the real possibility of radiation contamination, however, I and most other surfers I know try to limit the time spent in the water—and then make sure we are living healthy lifestyles in order to limit any potential negative effects to our health.”

“In fact, this whole scare has made me appreciate the ocean—as well as life itself—even more deeply,” she added. “If it becomes too dangerous I may eventually have to move elsewhere, but I love living here and will do everything in my power to stay.”

The internet has been a powerful ally to citizens in Japan who seek to bypass official media channels in order to find and share information regarding what is actually happening with regard to the ongoing nuclear disaster. With the installation of a live webcam aimed directly at the Fukushima Daichi plant, for example, citizens are now able to monitor the situation and send out alerts via e-mail and Twitter when—as happened last week, for example—smoke was seen being emitted from one of its reactors.

A message that has recently been circulating around the Japanese Twittersphere calling for action reads as follows:


Here are a few examples of what is happening now in Japan:

1. The Japanese government allows fresh food to be on the market although it contains radiation 20-30 times higher than the global safety standard.

2. The Japanese government does not do anything even with food that contains radiation higher than Japanese safety standards.

3. The Japanese government does not inform its citizens of the results of the seafood radiation investigation, and does not allow Green Peace to conduct a thorough investigation of the sea environment around Japan.

4. According to UK researchers, more than 400,000 additional cancers will occur within the next 50 years on account of the radiation if no preventive efforts take place.

6. The Japanese government insists that 20mSv/year is safe for children at a school yard. The amount is 20 times higher than previous safety standards.

7. Data and information about Fukushima has been hidden, although radioactive particles keep spilling into the water and air every day.

8. Several millions of residents who evacuated from the area surrounding Fukushima still live in public buildings,gymnasiums, and such. There is no plan for them yet.

9. Several millions of Geiger counters donated by foreign counties are sitting, unused, in a warehouse.

Please send an email about these issues to the following Japanese officials:

Mr. Naoto Kan, prime minister (for all of the above): kan-naoto@nifty.com

Please urge them to:

1) Conform to global standards on radiation safety in terms of food, water, and the environment

2) Check radiation levels in the air and water, and on the ground, which are more suitable to protect human life

3) Make all updated radiation information easily available to everyone

Itsumi Kakefuda, a researcher with the Digital Human Research Center (affiliated with the National Institute of Advanced Industrial science and Technology), who translated the above appeal into English, said this with regard to fears among parents in Fukushima/Tokyo:


While different from the PTSD that is occurring within the afflicted areas, many parents of schoolchildren in the Tokyo metropolitan are also expressing fear, anger, and anxiety because of the confusion and lack of information. Clearly, the fundamental problem is the government and TEPCO, because of their horrible crisis communication. Sometimes this stress turns into cognitive/emotional overload, which can then lead instead to denial. Many interpersonal conflicts have also been increasing between those who are extremely concerned and are calling for action, vs. those who have chosen not to worry about the situation.

Others challenging the official line that radiation is safe and harmless are many artists and musicians, including Rankin’ Taxi, who performed at last Saturday’s gathering in Shinjuku. The group teamed up with the Ainu Dub band for the powerful “You Can’t See It and You Can’t Smell It Either," that minces no words (nor images) in its criticism of nuclear power and the handling of the Fukushima crisis:

Internationally renowned author Haruki Murakami delivered a speech last week in Barcelona upon receipt of the Catalonia International Prize wherein he interrogated the values of “efficiency” and “convenience” that he argues led to the Fukushima crisis via Japan’s passive acceptance of nuclear power. He then went on to poignantly challenge human beings across the globe to together create a future that instead prioritizes life and humanity. An English translation of Murakami’s speech is available at the “A Daily Life in Uptown Tokyo” blog .

Further information on what actually occurred at the Fukushima nuclear power plant in the days and weeks following the crisis, which went unreported in establishment news for months, is available in CNN interviews with physicist Dr. Michio Kaku and nuclear engineer Arnie Gunderson.

For more on radiation and precautions against its potential negative effects, see thes essays from herbalist Ingrid Naiman and this lecture by Kyoto University Professor Hiroaki Koide.

Additional reports on Saturday’s demonstrations across Japan may be read in the New York Times and Tokyo Progressive. Paul Jobin's "Dying for TEPCO? Japan's Nuclear Contract Workers" published at The Asia-Pacific Journal providess disturbing insight into the top-down workings of the nuclear power system as it plays out in Japan, and Dahr Jamail's "Fukushima: It's Worse Than You Think" at Al Jazeera online powerfully discusses the Fukushima disaster in its historical context.

Your signing a petition to stop the remaining nuclear reactors in Japan and a transition to clean, safe energy sources would be greatly appreciated. It may be accessed here.

Thanks for this, a great and illuminating article

We're with you, Kim. Nuclear power makes no sense in Japan. The article was well researched and very well written.