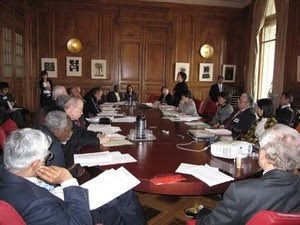 Committee on the Elimination of Racial Discimination meeting at the UN (Photo courtesy of the International Movement against all Forms Discrinination and Racism)
The Japanese government has been receiving increasing criticism for its policies towards the indigenous people of Japan. Just last week, the Shimin Gaiko Centre (Citizens' Diplomatic Centre for the Rights of Indigenous Peoples) submitted a report to the United Nations Forum on Indigenous Issues, detailing the abuses of Ainu and Okinawan human rights by governmental plans to build an industrial waste disposal site on sacred Ainu land in Monbetsu, and to construct new bases in Okinawa.

Furthermore, in February 2010, the United Nations Committee on the Elimination of Racial Discrimination (CERD) also submitted a report on Japan. Based on CERD's findings, they recommended:
In March 2011, a year after the recommendations were made, the Japanese government submitted a document in response. While acknowledging the need for a national human rights institution and the insufficiency of current efforts to prevent and handle human rights infringements, the Japanese government has yet to initiate the drafting of legislation on the matter.
Japan reports that the Meeting for the Promotion of Ainu Policies will ensure the respect of Ainu rights as guaranteed by the United Nations Declaration on the Rights of Indigenous People (UNDRIP):

In order to promote policies by sincerely listening to the opinions of the Ainu people, five of fourteen members of the Meeting for the Promotion of Ainu Policies were appointed from among the Ainu people. Each working group is also making efforts to reflect the Ainu people’s opinions in the policies through their participation. In addition, two prominent scholars of international human rights law participate in the Meeting as well.

There are more Ainu people included in these policy meetings than ever before. Previous expert panels on Ainu policy have included only 1 Ainu person or none at all. However, each working group has the participation of two Ainu people each making the majority of each group non-Ainu. While the " two prominent scholars" are key members of both groups, one Ainu participant is left out of both of the working groups entirely.
The working groups are focusing on the establishment of a "symbolic space for ethnic harmony" and conducting "survey of the living conditions of the Ainu people outside Hokkaido." A multitude of pressing issues covered by UNDRIP, including the Ainu right to control their education, are completely neglected. Therefore, the Japan Society for the Study of Adult and Community Education is currently researching the issues surrounding education for other indigenous peoples in Japan. The Shimin Gaiko Gaikou Centre further analyzed the workings of the Meeting in their response to the Japanese government's comments on CERD:

While the Meeting for the Promotion of Ainu Policies stresses that it refers to the UN Declaration on the Rights of Indigenous Peoples, it has not clearly indicated which paragraphs of the Declaration are taken into considerations, and how these are reflected in their work. Looking into the substantial work of the Meeting, we have not found any essential parts of the Declaration that have been being reflected in its work. Now, the two working groups are have almost reached their own conclusion, however, it is hard to say that the Meeting takes into consideration the various voices of the Ainu living in and out of Hokkaido in their promotion work, and its transparency and representation is still questionable.

We recommend that the Meeting for the Promotion of Ainu Policies or future successive agency of the Meeting has a structure in place to reflect the various voices of the Ainu and allows the Ainu to take their own initiatives in the work of the Meeting.

The Shimin Gaiko Centre also notes that the government has yet to set up a third working group in accordance with the CERD recommendations.
In addition to recommendations based on UNDRIP, CERD also urged Japan to ratify the International Labour Organization Convention No. 169 which specifically covers indigenous and tribal rights. Japan responded that it can not ratify the convention because some provisions are "not consistent with the legal system of Japan." Japan specifically noted: Article 9- respecting the customs of indigenous people in penal matters; and Article 10- giving preference to indigenous methods of punishment other than confinement in prison for indigenous peoples. Japan argues ILO No. 169 would permit the unequal treatment of Japanese citizens. In response, the Shimin Gaiko Centre recommends:

the Government list up all provisions contained in the Constitution, laws and systems that are not consistent with the provisions contained in ILO No. 169, and study how such provisions could be revised so that Japan ratifies ILO Convention No. 169. In doing so, it is recommended that the government conduct a consultation with the Ainu Peoples and Ryukyu/Okinawa Peoples to examine which provisions of the ILO Convention need to be implemented. It is very unrealistic that the Ainu and Ryukyu/Okinawa Peoples request the implementation of Article 9 and 10.

Should the Japanese government follow these recommendations, ILO No. 169 could be ratified with revisions.
Finally, in respect to recognizing the rights of the Okinawan people, the government responded by detailing the actions it has taken on a governmental level to develop the economy of Okinawa, arguing that the Japanese Constitution guarantees the rights of Okinawan people. Shimin Gaiko Centre notes that taking actions only on a governmental level will not ensure Okinawan rights are respected:

In its follow-up information submitted to CERD, the government limited itself to explaining only about its Okinawa promotion measures in the legal and institutional framework, which, according to their explanation, are based on the intentions and interests of the Okinawa prefectural government. CERD, however, encourages a wide range of consultations with Okinawan representatives. It is inadequate and insufficient to guarantee the human rights of the Okinawan people only by responding to what the Okinawa prefectural and municipal governments have requested.

We recommend that in addressing the structural discrimination against the people of Okinawa, the Japanese Government guarantee the rights of the Okinawan people in the context of CERD.

Japan has an obligation to ensure that the Ainu and Okinawan people are fully represented in policy deliberations and that their rights are respected. By following the recommendations of the Shimin Gaiko Centre it can be possible to overcome the institutional exclusion of their voices.
- Posted by Jen Teeter
Posted by TenThousandThings at 12:01 AM
Email ThisBlogThis!Share to TwitterShare to FacebookShare to Pinterest
Labels: Ainu, Human rights, indigenous, Japan, Okinawa