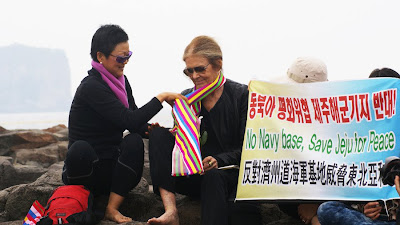 ... Jeju isn’t called the most beautiful place on earth for nothing. Ancient volcanoes have become snow-covered peaks with pure mountain streams running down to volcanic beaches and reefs of soft coral. In between are green hills covered with wildflowers, mandarin orange groves, nutmeg forests, tea plantations and rare orchids growing wild; all existing at peace with farms, resorts and small cities. Unesco, the United Nation’s educational, scientific and cultural organization, has designated Jeju Island a world natural heritage site.

Now, a naval base is about to destroy a crucial stretch of the coast of Jeju, and will do this to dock and service destroyers with sophisticated ballistic missile defense systems and space war applications. China and South Korea have positive relations at the moment. But this naval base is not only an environmental disaster on an island less than two-thirds the size of Rhode Island, it may be a globally dangerous provocation besides.

Residents of Gangjeong, the village that is to be home to this base, have been living in tents along the endangered coastline, trying to stave off the dredging and bulldozing. In a vote several years ago at a village meeting, residents overwhelming opposed the base.

They’ve tried to block construction with lawsuits and pleas for a proper environmental impact study. They’ve been fined, beaten, arrested and imprisoned. They’ve gone on hunger strikes, chained themselves to anything available, invited tourists in to see what’s at stake, established Web sites and won support from global peace organizations. Members of the “no base” campaign, including children, camp out along the shore behind high walls erected around the site to conceal the protests. Police officers patrol outside. This has been going on for more than four years...

When I was invited in May to again visit Jeju, by friends in the Korean women’s movement, I could see why it attracts peace conferences, honeymooners, environmentalists, marine biologists, film crews, pilgrims and tourists. But I also visited the peace encampment, within sight of harassing police officers and waiting bulldozers. The mayor of Gangjeong, the leader of the resisters, said quietly that he and others would give their lives to stop construction. His 92-year-old mother walks down from the village to the shore every evening to make sure he is still alive.

Still, the South Korean president, Lee Myung-bak, a former head of a construction company who was known as “Mr. Bulldozer,” hasn’t yet had a change of heart about supporting the naval base. Indeed, he seems to have the same relationship to construction that President George W. Bush had to oil. But I fear South Korea is a tail being wagged by the Pentagon dog. In contrast, his predecessor, Mr. Roh, said before he died that he regretted only two things: sending South Korean troops to Iraq and permitting a naval base on Jeju Island.

Jeju Island is on a very short list of candidates in a public Internet campaign to choose a new seven wonders of the world, and Mr. Lee is campaigning hard for it. He may have to choose. How can Jeju Island be one of the seven wonders when its claim rests on nature about to be destroyed?

Meanwhile, there are more people signing protest petitions on the Web, calling anyone they know in Washington, or going to Jeju Island to support and safeguard the protesters and show that tourists without guns, not military bases, are its economic future. In my daily e-mails with protesters on Jeju, I learned that bulldozers were spreading small rocks in preparation for laying concrete over lava, and living coral that is a distinctive natural habitat. Once the bulldozers are out of sight, children pick up those rocks, pile them into towers and plant a peace flag in each one.

For myself, I am writing this column, putting a petition on my Facebook page, and hoping for enough Arab Spring-like activism to topple one naval base.

I’ve never known less what will happen. I can still hear the dolphins crying as if sensing danger. But somehow, my faith is in the villagers who say, “Touch not one stone, not one flower..."

Gloria Steinem is an author, an activist and a co-founder of the Women’s Media Center. 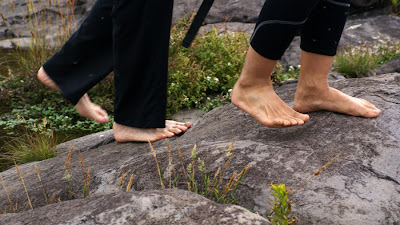