Kenzaburo Oe has been a principal voice in Japan's soul-searching in matters of war and peace since his emergence as a literary wunderkind during the late 1950's. Scholar John Nathan described the novelist as a "spokesman for the postwar generation" whose novels explored the lives of "young Japanese struggling to survive with dignity in desecrated society." Oe said the three seminal influences on his personal and creative development were the birth of his handicapped son, Hikari, and his visits to Hiroshima and Okinawa. 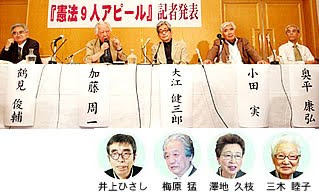 Concerned about the accelerated remilitarization of Japan during the Koizumi-Bush era, Oe joined with prominent Japanese thinkers in founding 9-Jo No Kai (The Article 9 Association) in 2004. In 2008, Oe prevailed in a lawsuit challenging his essay, Okinawa Notes in which the author adhered to the widely accepted assertion that the Japanese military forced civilians to commit mass suicide during the Battle of Okinawa. Earlier this summer, speaking at an Article 9 Association meeting in Tokyo on June 19 (the 50th anniversary of the automatic enactment of the revised Japan-U.S. Security Treaty on June 19, 1960), Oe called for a reduction in military bases on Okinawa in accordance with the Peace Constitution.

In "Hiroshima and the Art of Outrage," published by the New York Times last year, Oe articulates the interconnections between atomic bombings of Hiroshima and Nagasaki; the 60-year U.S.-Japan military occupation of Okinawa; and ongoing attempts by military industrialists to undermine Japan's non-nuclear principles:


The Futenma Marine Corps Air Station on Okinawa, one of the largest United States military bases in East Asia, is in the center of a crowded city. The American and Japanese governments acknowledge the dangers of this situation, and they agreed nearly 15 years ago that the base should be moved; however, no move has yet been made.

In 2009 a new prime minister, Yukio Hatoyama, tantalized Okinawans with the prospect of moving the despised base off the island, but he was recently forced to resign, in part because of his failure to keep that promise. Mr. Hatoyama’s successor, Naoto Kan, has made it clear that he intends to respect the United States-Japan security treaty — a position that, while not directly related to the issue of dialing down the United States military presence in Japan, may indicate which way the wind is blowing.

It was recently reported here that a government panel is about to submit a policy paper to Prime Minister Kan, suggesting that regarding Japan’s “three nonnuclear principles” — prohibiting the production, possession and introduction of nuclear weapons — it was not wise to “limit the helping hand of the United States,” and recommending that we allow the transport of nuclear arms through our territory to improve the so-called nuclear umbrella.

When I read about this in the newspaper last week, I felt a great sense of outrage. (I’ll explain later why that word has such deep significance for me.) I felt the same way when another outrageous bit of news came to light this year: the decades-old, Okinawa-related secret agreement entered into by the United States and Japan in contravention of the third of the three nonnuclear principles, which forbids bringing nuclear weapons into Japan.

At the annual Hiroshima Peace Ceremony on Friday, this year marking the 65th anniversary of the dropping of the atom bomb, representatives from Britain, France and the United States planned to be in attendance, for the first time. This is a public event at which government leaders give speeches, but it also has a more profound and private aspect, as the atomic bomb survivors offer ritual consolation to the spirits of their dead relatives. Of all the official events that have been created during the past 200 years of modernization, the peace ceremony has the greatest degree of moral seriousness... In Edward W. Said’s last book, “On Late Style,” he gives many examples of artists (composers, musicians, poets, writers) whose work as they grew older contained a peculiar sort of concentrated tension, hovering on the brink of catastrophe, and who, in their later years, used that tension to express their epochs, their worlds, their societies, themselves.

As for me, on the day last week when I learned about the revival of the nuclear-umbrella ideology, I looked at myself sitting alone in my study in the dead of night . . . . . . and what I saw was an aged, powerless human being, motionless under the weight of this great outrage, just feeling the peculiarly concentrated tension, as if doing so (while doing nothing) were an art form in itself. And for that old Japanese man, perhaps sitting there alone in silent protest will be his own “late work.”