EX-SKF: "Radioactive Landfill: Tokyo Metropolitan Government Has Been Doing It Since May"

Via EX-SKF blog: "Radioactive Landfill: Tokyo Metropolitan Government Has Been Doing It Since May": 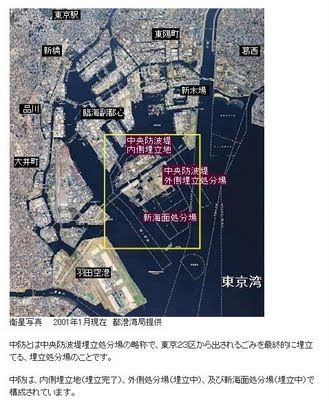 Yokohama City residents had just enough time to get organized very quickly and were able to halt (for now) the start of dumping of radioactive sludge ashes into the ocean in their final processing facility at the end of Minami Honmoku Pier on Tokyo Bay.

Tokyo residents either did not have a chance to do so because they didn't know, or they didn't care.

On June 3, Tokyo Metropolitan government announced the result of air radiation survey done on the landfill locations where the radioactive sludge and ashes were being dumped, and that's how some people (mostly bloggers as far as I've found) noticed it and wrote about it.

That EX-SKF is just a fountain of information (flowing in two languages)!
It seems like dumping radioactive waste has become standard operating procedure in more than a couple of places. I heard the reason Yokohama ran out of storage space for its atomic ash was because their major outlet channel for it had dried up. The neighboring city of Kawasaki had previously been taking the stuff off Yokohama's hands and using it presumably for landfills, etc. Once they stopped taking it, much like Tokyo, Yokohama turned to the Homer Simpson playbook and decided to dump it in the bay (a move which, as the article notes, has been thwarted by now informed citizens). I think it would also be good to know what risk, if any, the incineration process that turns the sludge into ash poses to local residents.

Hi JT, Dumping nuclear waste has been a common practice for decades. I saw a documentary on Sundance Channel last year called "Waste: A Nuclear Nightmare" that I forced myself to watch; I was stunned viewing places in Russia where nuclear waste was just dumped. I took notes from the film, planning on posting, but never did. But I will now, since we all must take a longer look at this issue that impacts the entire world. I looked at the film will air again on Oct. 16 but I don't know if people in Japan have access to Sundance or Netflix (since the latter's online, that should be accessible to everyone). Yes on finding out more about the incineration process too. And learning how to come to terms with the fact that we're all being nuked. I found a book called "Learning to Glow" and am reading Hiroshima and Nagasaki survivor narratives again, not as a compassionate witness or as a lesson for what societies must try to prevent, but as a guide for how to cope with with living in a permanent dirty-bomb situation which is what Fukushima is and challenging authorities to do what can possibly be done. Many thanks for dialogue, JD