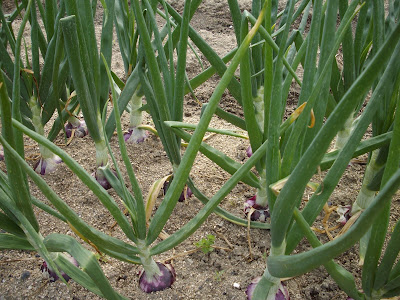 ( Family garden on an island in the Inland Sea. Photo: JD)

Comprehensive analysis of the engineered global food price hikes, the global food crisis, and how to fix it (agro-ecology, food democracy) at Slow Food International. (The author explains why US Big Ag is pushing so hard to force open markets in Asia (and Africa)): "From Food Monopolies to Food Commons" by Eric Holt-Giménez, Ph.D.:


Calls for food sovereignty, food justice and even “food democracy” are ringing from fields to kitchens around the world. In the face of the recurrent food and diet crises plaguing our planet, farmers, farm and food workers, consumers—politically engaged citizens—are struggling to regain control over their food systems. Why?

Because the “solutions” to these crises offered by governments, agri-food monopolies and multilateral institutions—e.g., more “free” trade, genetically engineered crops and the spread of giant retail chains—brought on the crises to begin with. With a billion people “stuffed” and a billion “starved” on the planet, why do the G-8 countries, the World Bank, International Monetary Fund and World Trade Organization continue to prescribe catastrophic solutions to catastrophe?

The answer is simple: the oligopolies dominating our global corporate food regime are also in crisis. The record profits and massive wealth they accumulated during the 2008 and 2011 food price inflation crises must be re-invested in order to maintain a compound rate of growth... Where can they re-invest their vast amounts of accumulated wealth? The monopolies have what is called a crisis of over-accumulation.

Who will solve the crisis of over-accumulation for the monopolies? The poor.

The poor are not getting any richer, but as a group they are growing at the rate of 8% and because they make up nearly half of the world’s population they offer a vast, expanding market opportunity for the agri-food monopolies. With the promise of “saving the world from hunger,” these corporations are now busy leveraging public development funds of northern governments to open new markets in Africa and Asia. Foreign food and development aid—which is fuelled by public money—is being directed to poor countries so that they can buy GM grain, fertilizers, pesticides, and genetic engineered seeds from the northern monopolies.

Many studies and reports have shown that agroecology is the best answer to hunger and climate change in the Global South. Poor countries also have to be allowed to protect their own agriculture. The oligopolies controlling our food systems are not solving the problem of hunger—rather, hunger is being used to solve the problem of over-accumulation for the oligopolies...

Over the last three decades the waves of neoliberal globalization has not only ruined local and regional food systems...

Food sovereignty, food justice and food democracy are movements of people that seek other solutions. They seek to re-open public spaces of decision so that people rather than monopolies decide what we eat, how it is grown, and how the multi-trillion dollar wealth of our world food systems is distributed. How can our movements make sure that our public resources are used for the public good rather than monopoly interests? By re-establishing the public sphere within our food systems—by taking back the “food commons.”

A food commons is not only a physical place where food is produced, processed, sold or consumed; it is also a social space where decisions are made in the interest of the common good. Whenever food activists take back a part of the food system in the interest of the common good, they are constructing a food commons. This is why food sovereignty as an organizing concept and precondition for food justice, food democracy and the right to food is so important: it implies a space that is sovereign to the corporate food regime. It is a space in which people—not corporations—decide...

The social construction of food commons is taking place around the world in the nooks and crannies of the existing corporate food regime. Little by little, the different experiences of community gardens, fair trade, community service agriculture, food policy councils, farmer’s movements and consumer movements are slowly converging in their efforts to build a better food system.