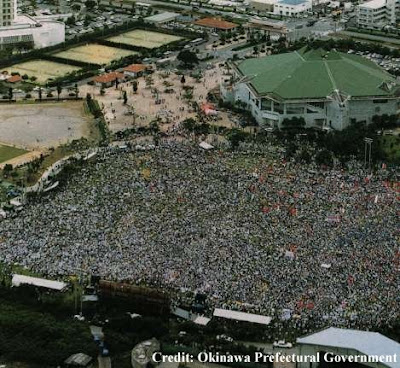 It's the 16th anniversary of the historic Okinawa-wide protest of the 1995 kidnapping, beating, and gang rape of a 12-year-old girl by 3 U.S. servicemen. The protest launched an ever-deepening Okinawan movement for democracy, human rights, and the indigenous Okinawan culture of peace.

Here is their statement:


Deliver the Spirit of Okinawa to the World

The citizens of Okinawa are a people who hope for peace.

Peace is the backbone which has supported Okinawa throughout history and has become something even more powerful to those who experienced the unprecedented Battle of Okinawa. It is also the basis for their view of the world, in which they are very confident.

The words "nuchi-do-takara" (Life is the greatest treasure) which symbolizes this reverence for peace, will surely last forevermore. The saying "ichariba-chode"(Once we have met, we are like brothers and sisters) has been carried down through the ages and represents the spirit of Okinawa. The spirit of "yuimaru" or helping, supporting and coexisting with one another, has overcome the ups and downs of history, and is considered to be a great asset to the Okinawan people.

Throughout history we have realized that our nation and humanity as a whole, should advance not in the direction of military power, but rather towards friendship and goodwill by accepting, trusting and helping one another. This rich culture which has made flowers bloom in the southern islands, is the essence of the history of the Okinawan spirit.

50 years ago, while the dust of combat had not yet disappeared, the first thing we set our minds on was the reconstruction of the peaceful islands of Okinawa, whose culture was reared by our ancestors. However, as if to laugh at the peaceful intentions of our people, the world took up nuclear arms and rushed into the winter known as the Cold War. Furthermore, like in the case of Korea and Vietnam, we have been forced to get involved in issues of war. And now, 50 years since the end of World War II, the situation regarding the bases has not yet changed in the slightest.

Approximately 20% of the main island of Okinawa, a prefecture which accounts for a mere 0.6% of the nation's total area, continues to be taken up by the huge bases and is forced to bear the burden of 75% of all US military installations in Japan. This provides clear evidence of the stagnant state of base affairs. The peace dividend that the people of Okinawa Prefecture have been hoping and waiting for has been continuously denied to them. The Okinawan people have not yet been allowed to benefit in the slightest from this peace, On the contrary, the one thing we are allowed to have is the unwelcomed presence of repeated military aircraft crashes and other such terrible occurrences. We are also "rewarded" with the destruction of our environment, including noise pollution and live firing exercise which destroy the forests that are important to the accumulation of our water resources.

Since the [1972] reversion to Japan, there have been approximately 4700 cases of base-related crime. These incidents pose a clear threat to the way of life and precious existence of the Okinawan people. And then of September 4, 1995, just as the people of Okinawa Prefecture had feared, yet another detestable and disastrous incident occurred. This brutal act, committed by three young American servicemen, is absolutely inexcusable.

We know the real evil and the fundamental cause of this incident because we have experienced it during the Battle of Okinawa and the US military occupation.

We saw the nature of the military on the battlefield during the Battle of Okinawa and under the 27-year-long US military occupation. Their inhuman behavior was a disregard for, and a complete desecration of human dignity. It contradicts the Okinawan spirit which is symbolized in sayings such as "Life is the greatest treasure," "Once we have met, we are like brothers and sisters," etc.

Through the sacrifice of many precious lives and a lot of bloodshed, we have reconfirmed our ancestors' unequivocally correct choice not to bear arms and to deny the use of military power as a means of diplomacy.

This year, which marks the 50th anniversary of the end of World War II, "The Cornerstone of Peace" was constructed in the Peace Memorial Park in Mabuni, Itoman, the place of the last and fiercest battle of World War II, the Battle of Okinawa, in order to pray for the souls of all those who lost their lives during the war and to pray for everlasting world peace. Over two hundred thirty thousand names are inscribed on "The Cornerstone of Peace", irrespective of nationality.

Our heartfelt hope is to build a peaceful Okinawa and a world without weapons. We are certain that this is the only way that the over one million two hundred thousand Okinawans as well as all the people living in Asia and the rest of the world, can coexist as human beings and live together on the earth in the future. We appeal to the world to accept the Okinawan spirit as its own in order to ensure that the tragedy that this young Okinawan girl experienced is not repeated, and so that no one will commit such terrible crimes ever again.