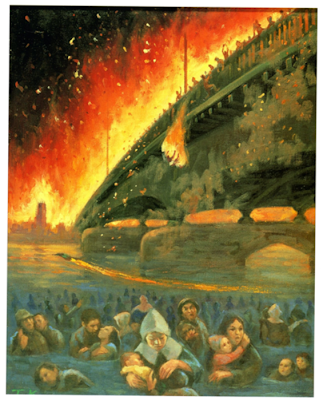 On March 10, we fled from our home in Asakusa Ward’s Senzoku-cho to Sumida Park near the Kototoi Bridge. The park was a chaotic crowd of jostling people, and I got separated from my family. I jumped into the river because the sparks flying through the air made it so hot that I was having trouble breathing. I was able to wedge myself between the stones of one of the bridge’s supporting pillars. From there I could look up at the flames on the bridge above me and see people stuck on the railing. Every now and again red hot sheets of corrugated tinplate would fly off into the river.

With dawn, those of us who had survived under the bridge gathered. There were about twenty of us left. Everyone else had either burned to death or drowned.

I lost six family members that night, but my troubles were only beginning. I was discriminated against for decades as a war orphan and was forced to live at the lowest levels of society. I don’t even know who to blame for it. I just pray that those who haven’t experienced war will never have to go through that hell themselves.

More at Japan Air Raids.org and Mark Selden's "A Forgotten Holocaust: US Bombing Strategy, the Destruction of Japanese Cities and the American Way of War from World War II to Iraq" at The Asia-Pacific Journal (historical and comparative analysis of the mass bombing of civilians).
Posted by TenThousandThings at 6:00 PM
Email ThisBlogThis!Share to TwitterShare to FacebookShare to Pinterest
Labels: art, civilian victims of military violence, Japan, Pacific War, Tokyo