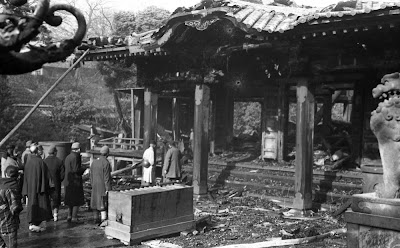 Nezu Shrine near Asakusa. (Photo: Center of the Tokyo Raid and War Damages


More than 700 never-before-seen photos on the U.S. air raids during World War II, taken by an Imperial Japanese Army propaganda apparatus, will be displayed in Tokyo.

Prints from 636 newly found negatives, as well as 79 photo panels, will be shown at the Center of the Tokyo Raid and War Damages in Koto Ward from Feb. 18...

A man who acquired Tohosha’s former office and darkroom in Tokyo found and kept about 17,000 negatives and donated them to the center last year.

The photos to be displayed show damage from the air raids, which lasted for half a year from November 1944, reconstruction work and life in the ruins of war.

In addition to homes and factories, downtown areas including Ginza and Hibiya and universities such as the Nippon Medical School, Keio University and Sophia University are photographed.

Some photos show damage from U.S. air raids on Hong Kong and Guilin in China, which were under Japanese occupation.

The special exhibition, in commemoration of the 10th anniversary of the center’s opening, runs through April 8. Admission is 300 yen for adults and 200 yen for junior and senior high school students.

For those who can't make it to the center in Tokyo's Koto War, Time is featuring an online gallery of some of the photographs.

For more info, please visit The Center of the Tokyo Raid and War Damages website.
Posted by TenThousandThings at 7:13 AM
Email ThisBlogThis!Share to TwitterShare to FacebookShare to Pinterest
Labels: civilian victims of military violence, Japan, Pacific War, Tokyo