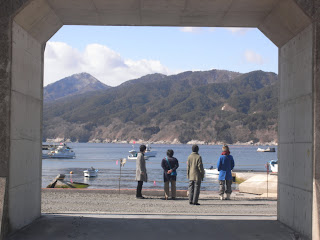 Project Members in the town of Yamada-cho, Iwate prefecture

As the one-year mark since Japan's earthquake, tsunami and nuclear disaster approaches, a group of Tokyo-based activist filmmakers have launched a remembrance project based upon their travels to the town of Yamada-cho in Iwate prefecture, which was hard hit by the disaster. There, they have forged relationships with local individuals living in shelters and temporary housing units through simple, life-affirming actions such as cooking, singing, and sharing laughter and tears together during numerous trips to the region over the past year since the disaster struck.

Inspired by the solidarity vigils led by the Women in Black peace activists worldwide, the project invites individuals from around the world to share their thoughts on this occasion simply by sharing a meaningful photograph. Spearheading the project are the members of a filmmaking organization known as Feminist Active Documentary Video Festa (FAV).

‘Photo-graph’ is to draw with light

Pick a place and stand while you embrace your thoughts over the 3.11 Great Eastern Japan Earthquake/Tsunami, care for your loved ones or your hopes and dreams. When, where and how would you stand?

This project calls for anyone to take a photo while thinking of one’s own “Yamada” that is dear to you. The photos are strung together on the web like an infinitely spread quilt. You can join by simply taking a photo and sending it to us. Anyone is welcome to join!

Please take a picture of yourself standing and send it to yamada@renren-fav.org. The photos will be shared at http://www.renren-fav.org/yamada/eng/. The posting period is unlimited. You’re welcome to send your photos once or periodically.

This project began as one of the members of FAV visited the tsunami affected town of Yamada in Iwate Prefecture soon after the Great East Japan Earthquake in order to volunteer to cook for the evacuees. The project is comprised of two separate activities, photo + film. The film project is motivated by a wish to keep in touch with the survivors and is built on a cycle of filming and screening in Yamada. “Yamada” is a common name in Japan that could be any place or anyone. Where or who is it that would be dear to YOU? The photo project has developed in this period leading up to one year after the disaster, so as to photograph this moment in which one stands with thoughts of each of our “Yamada.” The photographs are strung together like an infinitely spreading quilt on the web. The idea of “standing in silence” was inspired by the Women in Black standing action.

A world-wide network of women committed to peace with justice and actively opposed to injustice, war, militarism and other forms of violence. It is not an organization but a means of communicating and a formula for action. It s actions often take the form of women wearing black, standing in a public place in silence.
http://www.womeninblack.org/en/vigil

FAV brings to you a collection of outspoken and larger-than-life films from a feminist perspective. Started in 2005, it’s a creative space made possible by organizers, film-makers, and audiences working together.
www.renren-fav.org

** PLEASE SEND YOUR PHOTOS AND SPREAD THIS WIDELY ** 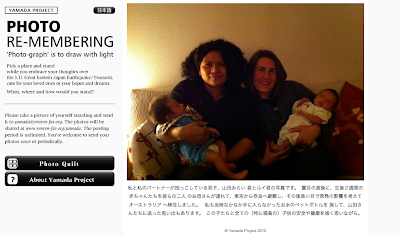 The blog of FAV member Miho Tsujii includes a video and English-translated lyrics of the moving song "Here Lives My Heart" by vocalist Fumika Takahashi, which was written on behalf of tsunami survivors.

An event will be held at 7pm on Weds Mar 28th at Waseda Hoshien Liberty Hall where Takahashi will perform, and FAV members will screen their footage from Yamada-cho.