Mairead Maguire: "The World Should Join in Call to Stop US War in Syria" 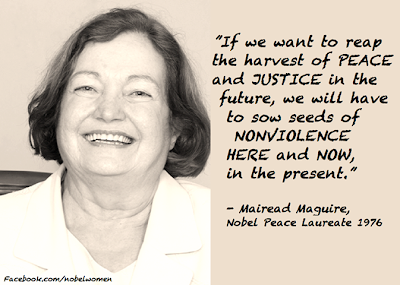 Nobel Peace Laureate and Global Article 9 supporter Mairead Maguire, is calling for the Obama administration to rethink its plan to bomb Syria and is asking people everywhere to join her  in the September 7, 2013 worldwide day of prayer and fasting for peace in Syria:


I would like to add my support to Pope Francis’ appeal and pledge to pray and fast for peace on September 7th. I encourage people of all faiths and none to join that global day of fasting and prayer for peace, and to act for peace and against U.S. military intervention by the United States in Syria.

...Every act has its consequences and every violent act, like the proposed U.S. military intervention, has its violent consequences which will cause the death of further Syrian civilians and result in many more refugees.

Such U.S. military action, which will probably involve trying to destroy the Syrian army, will leave the civilian population unprotected from the onslaught of armed opposition forces. It will embolden and strengthen the thousands of Islamic extremists from all over the world who have poured into Syria. They are financially supported and trained by some western governments, and their intent to remove the Syrian Government and kill all those who oppose them.

Their mission and aim coincides with that of the U.S., Saudi Arabia, and Israel—all of whom refuse to support Geneva II and a peaceful solution to the proxy war being perpetrated for oil, resources and control.

There is still time to stop this mad rush to war. The people of America can do it. As the British people put pressure on their members of Parliament and insisted “enough is enough” and said “No to military intervention,” so too can the American people mobilize and act to stop this proposed illegal war. (Without a U.N. Security Council resolution, any U.S. government military action is illegal.)

...Together, let us fast, pray and send a clear message to President Obama, the U.S. Senate and Congress—“No war, no military attack, no support for armed opposition, no support for al-Qaeda, no bombings.”

Give peace a chance!