Prayer for Peace in Syria: "Let the cry for peace ring out in all the world." 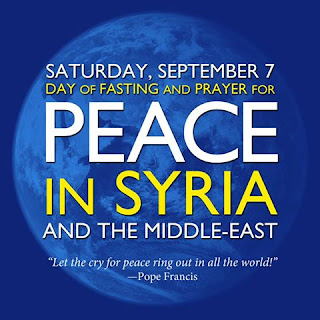 
How many conflicts, how many wars have mocked our history?  . . . Even today we raise our hand against our brother... Even today, we let ourselves be guided by idols, by selfishness, by our own interests ...We have perfected our weapons, our conscience has fallen asleep, and we have sharpened our ideas to justify ourselves. As if it were normal, we continue to sow destruction, pain, death! Violence and war lead only to death, they speak of death! Violence and war are the language of death!

At this point I ask myself: Is it possible to change direction? Can we get out of this spiral of sorrow and death? Can we learn once again to walk and live in the ways of peace? ...Yes, it is possible for everyone! From every corner of the world tonight, I would like to hear us cry out: Yes, it is possible for everyone! Or even better, I would like for each one of us, from the least to the greatest, including those called to govern nations, to respond: Yes, we want it!

...This evening, I ask the Lord that we Christians, and our brothers and sisters of other religions, and every man and woman of good will, cry out forcefully: violence and war are never the way to peace! Let everyone be moved to look into the depths of his or her conscience and listen to that word which says: Leave behind the self-interest that hardens your heart, overcome the indifference that makes your heart insensitive towards others, conquer your deadly reasoning, and open yourself to dialogue and reconciliation. Look upon your brother’s sorrow and do not add to it, stay your hand, rebuild the harmony that has been shattered; and all this achieved not by conflict but by encounter!

Via AP, "100K of all faiths rally to Pope's call for non-military response to Syria":


Francis spent most of the vigil in silent prayer, but during his speech he issued a heartfelt plea for peace, denouncing those who are "captivated by the idols of dominion and power" and destroy God's creation through war.

"This evening, I ask the Lord that we Christians, and our brothers and sisters of other religions and every man and woman of good will, cry out forcefully: Violence and war are never the way to peace!" he said.

"May the noise of weapons cease!" he said. "War always marks the failure of peace, it is always a defeat for humanity."

...leaders from a variety of Christian and non-Christian denominations joining cardinals, politicians and ordinary folk for the evening of prayer, hymns and meditation.

"This is already a success, the fact that all of us are here, Hindus, Christians, Buddhists, atheists," a Hindu believer named Anata said. Pilgrims "made an effort to fast, not to do many things, and come here from all over Italy and Europe.

Via Waging Nonviolence, Ken Butigan of Pace e Bene, outlines the historical context of Pope Francis' appeal in "Peace on Earth lives on in Pope Francis’ call for nonviolent solutions in Syria":


John XXIII’s Pacem in Terris — Peace on Earth — was atypical in many ways, not least because it was intended not only for Roman Catholics...but to persons of good will everywhere. If peace was to be achieved, the letter implied, it naturally must be the work of everyone everywhere, and so the search for this elusive potential must include all of us. Thus the document was not weighted down with shrill dogma or theological obscurities. It was, instead, a gentle but determined plea for the world to come to its senses...

Pacem in Terris [published in 1963] was a love letter to humanity, but one that sprang, not from a sentimental naïveté or a groundless optimism, but from a profound meditation on the horrendous dangers that the Cold War in those days posed to all life, with which the pope had grappled in a direct way during the then-recent Cuban Missile Crisis...

As the historical record now shows, Pope John XXIII played a profound role in creating the conditions for an 11th hour agreement. The pope actively took part in back-channel communications, in which he agreed to deliver on Vatican Radio an urgent call for both parties to pull back from the edge. As historian Ronald J. Rychlak puts it, “With his plea, Pope John XXIII had given [Soviet Premier] Khrushchev a way out. By withdrawing now, he would be seen as a man of peace, not a coward.”

...In the spirit of the precedent of Pope John’s peacemaking during the Cuban Missile Crisis, I imagine Francis working tirelessly behind the scenes, offering his good offices to the actors on all sides of this conflict to negotiate a just and peaceful settlement.

I even dream of the pope audaciously traveling to Syria and staying put, in the spirit of spiritually grounded, nonviolent action, until this deadlock is broken and the potential for peace is established.

But I most vividly envision millions of people around the globe gathering this Saturday and beyond to say with one voice, “There are nonviolent options — let’s use them!”

We cannot predict what will transpire in the coming days. But, perhaps, the world will once again breathe a profound sigh of relief if millions of people of faith and conscience, including the pope, mobilize their spiritually-rooted people power to help create the conditions for pulling back from the brink — and for beginning to establish the foundations for a more just and nonviolent outcome.