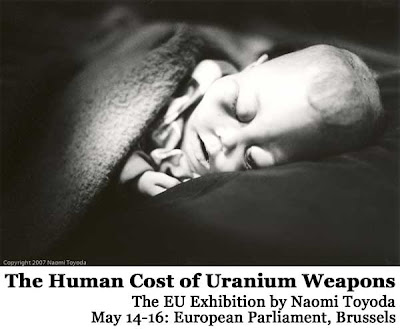 The destructive US legacy of "regime change" in Iraq has been foremost in the minds of those who joined the global outcry against the Obama administration's call to bomb  Syria.  Images of white phosphorus bombings; prisoner torture at Abu Ghraib; millions of Iraqi refugees; stories of young widows and children forced to prostitute themselves to survive; and reports of perpetual violence in Iraq are now imprinted in our collective memory.

Many in Japan are especially sensitive to the suffering caused by depleted uranium (DU) to Iraqi hibakusha: children born with mutations and Iraqis of all ages suffering from cancer.

Naomi Toyoda has covered the human cost and environmental devastion of the US invasion of Iraq, depleted uranium weapons, Hiroshima and Nagasaki nuclear bombing survivors, and the Fukushima nuclear disaster. He is co-editor of The Unending Iraq War: Questioning Anew from Fukushima.

Toyoda's exhibition, The Human Cost of Uranium Weapons, toured Europe in 2006. The International Coalition to Ban Uranium Weapons has an online gallery of the Japanese photojournalist's compassionate photographs which reflect the profound suffering caused by radioactive weapons in Iraq. 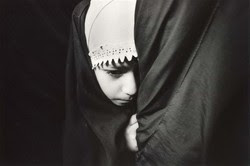 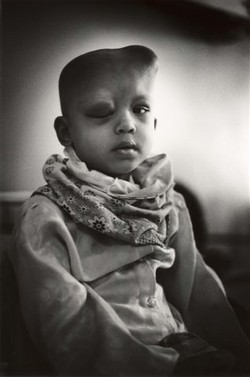 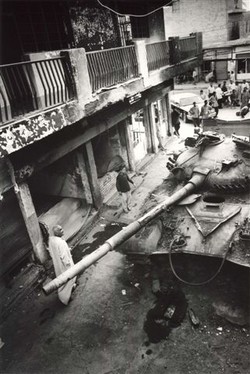 Depleted uranium (DU) is a radioactive heavy metal waste product of the nuclear power and nuclear weapons industry. Their nanoparticle fallout has a half-life of 4.5 billion years, and enters the body through inhalation and ingestion, where they pass through cell walls..  DU can cause or accelerate cancer, mutate genes, and affect the kidneys, immune system, nervous system, respiratory system, and reproductive system.  The United Nations Human Rights Commission considers DU munitions to be "weapons of mass destruction or with indiscriminate effect" incompatible with international humanitarian law.

The US is the largest producer and user of DU weapons. The US military has produced DU weapons from nuclear waste since the 1970's.  The US  used uranium weapons in Iraq in 1991; in Bosnia from 1994 to 1995;  in Afghanistan from 2001; and in Iraq from 2003. NATO used depleted uranium weapons in Kosovo, Serbia and Montenegro in 1999. The US tested depleted uranium in Puerto Rico and Okinawa; the UK tested it in Scotland.

The UN General Assembly has twice called for greater transparency over DU weapons use. In December 2012, 155 countries voted in favor, however the US, UK, France and Israel opposed the text, which also acknowledged public health risks from DU use.

On the 10th anniversary of the US invasion of Iraq, Democracy Now! interviewed  Al Jazeera reporter Dahr Jamail who described the legacy of the U.S. military’s use of depleted uranium and white phosphorus (a chemical weapon) in Iraq and the ongoing plight of refugees in an interview,  "Ten Years Later, U.S. Has Left Iraq with Mass Displacement and an Epidemic of Birth Defects, Cancers":

And going on to Fallujah, because I wrote about this a year ago, and then I returned to the city again this trip, we are seeing an absolute crisis of congenital malformations of newborn. There is one doctor, a pediatrician named Dr. Samira Alani, working on this crisis in the city. She’s the only person there registering cases. And she’s seeing horrific birth defects. I mean, these are extremely hard to look at. They’re extremely hard to bear witness to. But it’s something that we all need to pay attention to, because of the amount of depleted uranium used by the U.S. military during both of their brutal attacks on the city of 2004, as well as other toxic munitions like white phosphorus, among other things.

And so, what this has generated is, from 2004 up to this day, we are seeing a rate of congenital malformations in the city of Fallujah that has surpassed even that in the aftermath of—in the wake of the Japanese cities of Hiroshima and Nagasaki that were—that nuclear bombs were dropped on at the end of World War II. So, Dr. Samira Alani actually visited with doctors in Japan, comparing statistics, and found that the amount of congenital malformations in Fallujah is 14 times greater than the same rate measured in the cities of Hiroshima and Nagasaki in Japan in the aftermath of the nuclear bombings.

These types of birth defects, she said—there are types of congenital malformations that she said they don’t even have medical terms for, that some of the things they’re seeing, they’ve never seen before. They’re not in any of the books or any of the scientific literature that they have access to. She said it’s common now in Fallujah for newborns to come out with massive multiple systemic defects, immune problems, massive central nervous system problems, massive heart problems, skeletal disorders, baby’s being born with two heads, babies being born with half of their internal organs outside of their bodies, cyclops babies literally with one eye—really, really, really horrific nightmarish types of birth defects. And it is ongoing...

Stunningly, as bad as things were under Saddam—and we have to keep in mind this perspective of Saddam in the wake of a brutal eight-year war with Iran and then the genocidal sanctions for 13 years, from 1991 up until the beginning of this invasion in March 2003—as bad as it was under Saddam, with the repression and the detentions and the torture and the killings, the overall feeling of Iraqis today, in Baghdad and other places in Iraq where I went this trip, was that things are much worse now...


Doug Rokke. who has a PhD in health physics, is one of the many people who have had direct experience with depleted uranium who advocate against it.  When the Gulf War started, he prepared soldiers to respond to nuclear, biological, and chemical warfare.  In "War Against Ourselves," a 2003 interview at YES! Magazine, he describes how DU caused deaths of his colleagues:


DU is an extremely effective weapon. Each tank round is 10 pounds of solid uranium-238 contaminated with plutonium, neptunium, americium. It is pyrophoric, generating intense heat on impact, penetrating a tank because of the heavy weight of its metal. When uranium munitions hit, it's like a firestorm inside any vehicle or structure, and so we saw tremendous burns, tremendous injuries. It was devastating.

The US military decided to blow up Saddam's chemical, biological, and radiological stockpiles in place, which released the contamination back on the US troops and on everybody in the whole region. The chemical agent detectors and radiological monitors were going off all over the place. We had all of the various nerve agents. We think there were biological agents, and there were destroyed nuclear reactor facilities. It was a toxic wasteland. And we had DU added to this whole mess...

What I saw...led me to one conclusion: uranium munitions must be banned from the planet, for eternity, and medical care must be provided for everyone, not just the US...but for the American citizens of Vieques, for the residents of Iraq, of Okinawa, of Scotland, of Indiana, of Maryland, and now Afghanistan and Kosovo...

War has become obsolete, because we can't deal with the consequences on our warriors or the environment, but more important, on the noncombatants. When you reach a point in war when the contamination and the health effects of war can't be cleaned up because of the weapons you use, and medical care can't be given to the soldiers who participated in the war on either side or to the civilians affected, then it's time for peace.

"A Speech by Naomi Toyoda at the EU Exhibition, The Human Cost of Uranium Weapons" (Int. Coalition to Ban Uranium Weapons, Hiroshima Office, May 14-16, 2007) 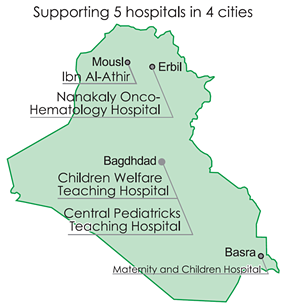 In the run-up to the 2003 invasion of Iraq, a minor peace activist I know delivered copies of a little book by photographer Takashi Morizumi to Japanese Diet members. The booklet was full of pictures of Iraqi children who had suffered the effects of DU munitions used in the first Gulf War (1990-91). She thought the photo shots made an impression since the next day a few Diet members held them up in speaking out against supporting the US-led invasion of Iraq. While the message hit home with some, her antiwar campaign never really worked. Japan did become part of the “coalition of the willing” in Iraq and I think her experience is telling. When she and her three-year-old son stopped by the office of one particular Diet member, the secretary became very angry and scolded her, saying, "This is absolutely no place for children!" Hopefully ten years later, Toyoda’s pictures seen here will prompt elected officials everywhere to look again and this time find a “place for children” in their hearts by banning uranium weapons and more.

Thanks so much; will add a link to Takashi Morizumi and read his work.