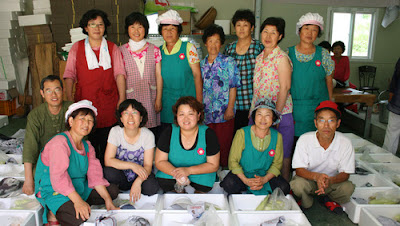 In "South Korea: Ground Zero for Food Sovereignty and Community Resilience," published last week at The Nation, Christine Ahn and Anders Riel Muller describe how South Korean small farmers and the communities, food buyers supporting them are challenging the country's industrial elite who want to end traditional organic Korean agriculture and outsource food production to corporate-owned plantations in Africa, Southeast Asia, and Latin America.  These visionary small farmers helping to pioneer the direction of sustainable agriculture for the world:


...And yet, despite a series of domestic and international policies that have sought to systematically eliminate them, South Korean farmers and peasants are fighting back. They have protested the WTO and bilateral free trade agreements (FTAs) for two decades, inspiring peasant farmers throughout the global south to mobilize against the free trade regime. At home, they are trying to build a domestic food sovereignty movement that is ecologically sustainable, socially equitable and economically resilient by producing healthy food, creating dignified rural livelihoods and reviving farming communities.

Instead of being blinded by South Korean high-tech bling, our eyes should be on South Korea’s food sovereignty movement. It offers the rest of us robust alternatives to the highly consolidated, industrialized, energy-intensive and chemical-dependent globalized food systems that dominate all of our lives.

In August, we co-organized and participated in a Food First Food Sovereignty Tour where we visited South Korea’s leading organic farms and progressive farmer-consumer cooperatives. South Korea is now a leader in the Asian region in organic production, so much so that the International Federation of Organic Agriculture Movements set up its offices there. And while there were many inspiring organic farms and gardens, two organizations stand out: the Korean Women Peasants Association (KWPA) and Hansalim.

“The food that is being sold by capitalism is sold as a commodity instead of food that sustains us,” explained Jeong-Yeol Kim of My Sister’s Garden, a KWPA project. “That’s why we believe that helping farmers thrive is the only way to fix this food crisis, and the pathway to do so would be to ensure that consumers and every citizen join us in the process of making this come true....

“Children today have no connection to the rural land,” explains Jeong-Yeol. Unlike previous generations, many children today no longer have grandparents or relatives living in the countryside who are connected in any way to farming. “So part of the effort of this partnership is to expose children to food production.”

...hese KWPA projects seek to radically alter the structure of the Korean food system and to de-commodify the linkages between consumers and producers. It has not been in vain. In 2012, KWPA was awarded with the Food Sovereignty Prize for their work to defend the rights of small-scale women farmers in Korea and preserve the cultural heritage of Korean native seeds.

In 1986, even before farmers’ markets and CSA programs became popular in the United States, South Korean farmers and consumers began Hansalim. “Han” in Korean means great, one, whole and together, and refers to all living things on earth. “Salim” refers to domestic activities that must be managed to care for one’s home, family, children and community, as well as to revive and give life.

With 2,000 growers and 380,000 consumer members, Hansalim is among the world’s largest and most successful agricultural cooperatives, creating an alternative economy that supports organic farmers and local agriculture, producing healthy food and protecting the environment in the process. Despite the global financial crisis, its sales have been growing annually by 20 percent. 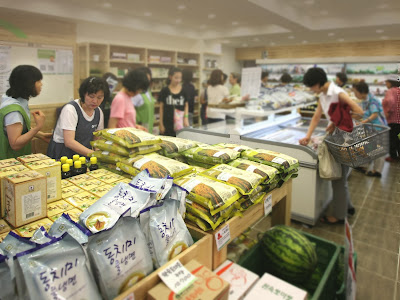