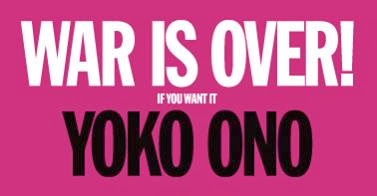 "WAR IS OVER! (IF YOU WANT IT)" opened Nov. 15, 2013 at the Museum of Contemporary Art in Sydney.  This is the first major survey in Australia of legendary artist, musician and peace activist Yoko Ono. "The exhibition encompasses five decades of practice in diverse media including eight participatory works. Themes include loss, conflict, humanity and the desire for world peace."  Ono designed the interactive parts of the exhibition to encourage collaboration, linked to a central theme of world peace.

Curated by MCA Chief Curator Rachel Kent, the title comes from a text by Ono and her late husband John Lennon that first appeared in 1969—in the middle of the Vietnam War—across public billboards in twelve cities worldwide, including Tokyo, Hong Kong, Toronto, Berlin, Paris, New York, and London.

While other visual artists have also engaged in peace art and activism, Ono is perhaps the most renowned peace artist of our time.  How did the impetus for her highly focused creative work originate?

Ono has explained that a childhood experience of the firebombing of Tokyo awakened her understanding of the human costs of military violence, fueling her peace art and activism for five decades.

Her father was an international banker and moved his family between the United States and Japan, so, as a child, Ono developed positive attachments to both countries. When the Pacific War broke out, she was eight-years-old, living in Tokyo.  She and her family survived (by taking shelter in a basement in their Azabu home) the firebombings of Tokyo, including the massive March 9-10, 1945 raid—the most destructive bombing raid in world history. At minimum, the napalm-fueled bombings destroyed 16 square miles (41 km2) of the city and killed 100,000 people.

In a 2007 interview with Amy Goodman:


I remember, when I was a little girl, a young — you know, when I was very young, one day I had high fever because of just a cold. You know, I had a cold.

And so, my family all went down into the basement to make sure that, you know, they’re alright. It’s a kind of shelter that they created in the garden actually. But I couldn’t go.

And I was just sort of in my bed, and I saw that all the houses next to us and all the places around me were just all fire. I go, "Oh." But, you know, when you’re young, and that’s the only reality you’re working through, you don’t really get totally scared or anything. You know, you’re just looking at it like an objective film or something like that. "Oh, this is what’s happening," you know?

And because of that memory of what I went through in the Second World War, I think that I really — it embedded in me how terrible it is to go through war.

To those who charge that she is "optimistic" or "naive," Ono points out that she is a simply a resilient pragmatist who cares about life and our planet—and does what she can do—which includes encouraging others to do what they can do to support peace building at multiple levels:


Well, you know, most people say, "Oh, you’re so optimistic. I mean, what’s wrong with you?" I’m not really that optimistic.

I am trying to make us survive. And in the course of survival, we don’t have the luxury to be negative. That’s a luxury that we can’t afford.

And we just have to do what we can do. And I think that instead of getting so upset with some people, you know, or some countries which are doing this, doing that — "How dare they," whatever — I think we should just do what we can do.

In a Reuters article about this current exhibition, she compares 1969 with 2013:


When John and I stood up, very few people were activists. Now I think 90 percent of the world is activists. If you're not an activist, you'd be considered a nerd maybe. 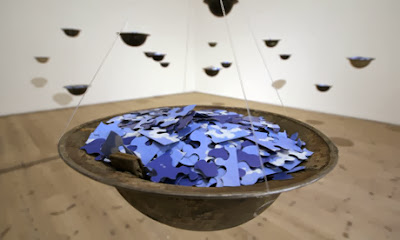 "Pieces of Sky"—WW II German helmets with blue jigsaw pieces inside.
Visitors are told, "Take a piece of sky. Know that we are all part of each other." 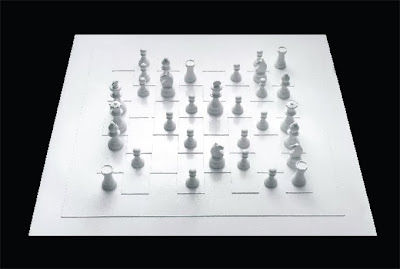 Shinya Watanabe:"Through her simple alteration of the chessboard
(a war strategy game), the artist made it extremely hard for the chess players to
fight each other, and this creates new relationships between the opponents." 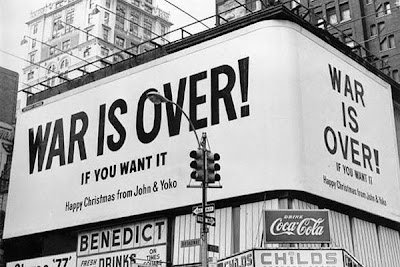