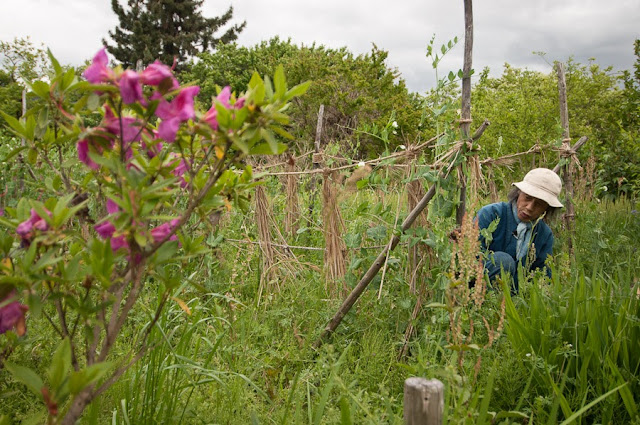 Ted Taylor's beautiful essay at KJ, "Even in 'Just Enough' There is Abundance," follows farmer Yoshikazu Kawaguchi's return to traditional organic farming and the development of his natural philosophy:


In fact, all life in the natural world is lived, as demonstrated in the interrelationship of all living things. Plants cannot exist without animals, and vice-versa. If there is good harmony between the organisms, plants, and animals, the cycle of life continues. As a farmer, Kawaguchi's role is simply to nurture this natural order, by cutting the weeds back just enough so that new rice shoots can grow, but later her allows the weeds to grow along with the rice in harmony. This leads to wholeness, with everything living together.

Final Straw, an upcoming documentary by Patrick M. Lyndon and Suhee Kang, also explores Kawaguchi's world  (and that of Seonghyun Choi and other natural farmers in Japan and Korea):

Environmental artist duo Patrick Lydon and Suhee Kang... are now in the final post-production stage for the Final Straw documentary. Due for initial screening in Spring of 2014, Final Straw is a cinematic exploration of Japanese natural farming, and a philosophical ride through the minds of amazing individuals who offer simple solutions to modern issues of sustainability, both on the farm and in the city. The film interacts with a cast of office workers, chefs, musicians, and farmers alike, all of who are students of the late Japanese farmer/philosopher, Masanobu Fukuoka.

It all started on a small mist-covered mountain farm in South Korea, and continued to include over 20 natural farmers in East Asia and the USA. The Final Straw is a story about food, life, and philosophy from individuals who have a great deal of delicious secrets, and a great deal of wisdom to impart about life. Yet, while the Final Straw is a deeply rooted exploration of natural farming, it’s also a film which teaches equally as much about how to live life as it does about how to grow healthy food. And today, with over 1/2 of the world’s population living in urban areas, it seems we need to revisit this connection with nature more than ever before.

Over the past 100 years, our gradual reliance on industry and separation from the natural world have pushed us into the most epically unsustainable and unhealthy time period yet known to humanity.

Food and diet have quietly become the leading cause of death in the U.S., and on a world scale, intensive chemical-based industrial agriculture have caused the deterioration of billions of acres of farmland, the starvation of millions of human beings, and the loss of over 75% of our planet’s agricultural diversity.

The destruction of natural resources continues at an alarming rate, and both governments and food producers are looking for answers to questions of human health and ecological sustainability, with a multi-billion dollar industry leading the charge to find the most economically profitable answer.

It’s slightly amusing then, that that on a few small farms tucked away in the mountain valleys of Japan and South Korea, Patrick and Suhee found a very simple 4,000 year-old answer to this very perplexing modern question.

Thank you for linking the article.

Thank you for your beautiful essay...