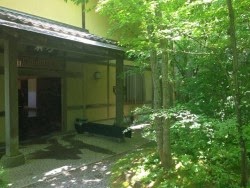 Great interview with Tohoku volunteer Bob Stilger by Mizuho Toyoshima and Lucinda Cowing at KJ.  In " Emerging Futures From Tohoku," Stilger describes how the vibrant and diverse civil cultures of Tohoku, a center for the slow and local movement, are rebuilding a post-3/11 Japan from the grassroots in myriad ways:


A week ago, Sunday, we had a delightful small, reflective dialogue at a place called Rensho-an in the town of Tamura near Koriyama, Fukushima. There was a group of maybe twenty people, most of them from the Tamura area, a few from other parts of Fukushima and elsewhere. Rensho-an is a beautiful space built by one Watanabe Shumei, a prolific artist and a man who enjoyed life. Over the course of Watanabe’s life — he died 7 years ago — it was a retreat space for people who knew of Watanabe’s work to come and spend time with him and Jinko, his wife. Jinko is now turning Rensho-an into a “learning center for life.” So, people came together just to be with each other, and to look back over their journeys these past few years.

After that dialog, I hosted a gathering of leadership from the Transition Town Movement in Japan and others from our Tohoku Futures Network. We spent two days to exploring what has transitioned in learning that might be useful in Tohoku at this important time.

After my meetings in Fukushima, I went to Otsuchi for the last of a series of four Future Sessions meetings, where people had come together to discuss what they could do themselves to make Otsuchi a better place to live. Some people in Otsuchi complain there that there are no longer any jobs; almost all fishing boats were destroyed in the tsunami. But those who attended the meeting are taking a different perspective and saying, “What do we have and how can we use it?” One of the ideas that they are working on is to make use of a local network of underground streams known to be incredibly pure and fresh, which enabled them in the past to cultivate wasabi, and also produce tofu. Now one idea is to recreate an industry centering on wasabi and tofu that last existed in the 1800’s, and tourism as well...

...one thing that has come up in many conversations is that conditions in each part of Tohoku are extraordinarily different. It is evident the coastal areas of Miyagi and Iwate have more in common with each other than they do with more inland areas of those same prefectures. When you visit Sendai, which is inland Miyagi, you find most people just want to get back to the old normal, whether or not they liked the old normal. That is not what is going on in the coastal areas. There is a sense that 3/11 opened up a new future, now it is a matter of finding out what it is and how to we create it...

There is a growing discontent over globalization, and in Japanese businesses much of this stems from not feeling connected to the people who buy and use their goods and services. Many are asking, “How do we relocalize?” This is one example of collective culture, in which the good and relationships of the whole takes precedence over that of the individual. The negative side of that is of course the idea that “the nail that sticks out gets pounded down” and feelings of “I don’t want to stand out.” That said, I have noticed over the past three years that the challenge of individuating from a collective culture is smaller than that of creating a collective out of an individualistic culture. 3/11 was a kick in the ass for people to stand up for what they believe, but they are doing this while staying connected to the collective at the same time. I think this is the energy we need all over the world: the capacity to differentiate while staying connected.


In less than a day, nearly 18,000 people were dead or missing, and almost 300,000 were homeless. The old normal was gone. Today, communities in the region are struggling to reinvent their lives, but what will their future look like in a context that is permanently changed?

...People in Fukushima live in one of three broad realities.  Some are still overwhelmed with despair, since everything they know and love has vanished.  Some would leave Fukushima in an instant if they had a way to relocate elsewhere.  And others have declared that “this is our home, so we will make a new life here together.”  They know that the past is gone and that an unknown future is waiting to be born.

For many, this is not just a matter of regaining property or livelihoods, it’s a profoundly spiritual question that centers on the meaning of happiness and the quality of life...

This transformation is one of ordinary people who are raising their voices and using their hands, reaching out to each other, taking one step forward and then another, to build new lives in a place that they call home.

Posted by TenThousandThings at 12:00 AM
Email ThisBlogThis!Share to TwitterShare to FacebookShare to Pinterest
Labels: 3/11, community, Fukushima, Japan, local, Tohoku