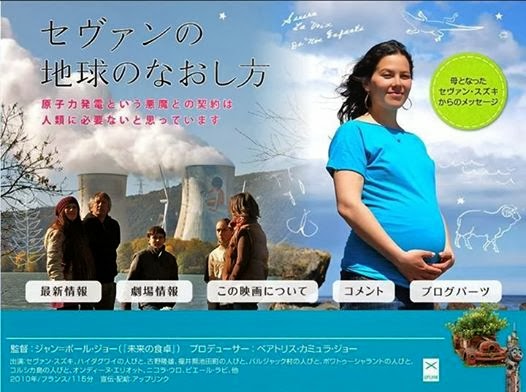 "If you can’t fix the environment, please stop breaking it!” Severn said to the world leaders at the Earth Summit in Rio in 1992. She was only twelve years old. A video of her speech presenting environmental issues from a youth perspective went viral, and Severn Cullis-Suzuki became known around the world as “The Girl Who Silenced the World for 5 Minutes."

Severn, daughter of Japanese Canadian scientist and environmentalist David Suzuki, is now 34-years-old and an environmental activist, speaker, television host and author. She has spoken around the world about environmental issues, urging listeners to define their values, act with the future in mind, and take individual responsibility.

For the first time in six years, Severn returns to Japan for “Love is the Movement” – a series of talks about the future of the human race in the face of global environmental crisis. Issues covered include the localization movement, the fair trade movement, and other movements that focus on quality of life for our children and future generations.

Severn Suzuki will be at Kyoto's Ryukoku University on February 21st.
Details (in Japanese) here: http://kokucheese.com/event/index/141937/

Other stops include Tokyo, Nagoya, Kyoto, Fukuoka, and Shiga.

Details on the "Love is the Movement" Tour (in Japanese) here: http://www.sloth.gr.jp/events/sev2014/

All about Severn Suzuki here: http://severncullissuzuki.com/bio
"Love is the Movement" on Facebook (in Japanese): https://www.facebook.com/sev2014.