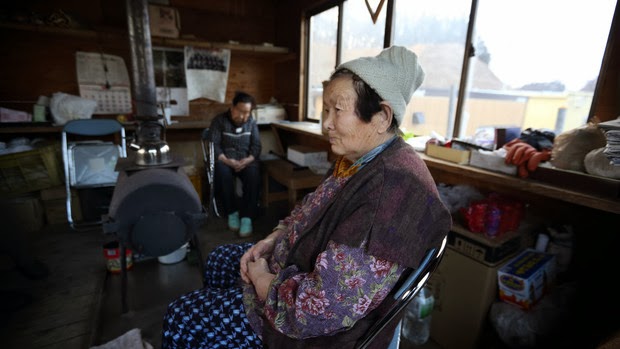 “It’s cold in the winter and the walls are so thin that you can hear our neighbors’ footsteps; they must hear us too,” said Nishihara, whose heart condition has worsened since the catastrophe. “We thought about buying, but because of my illness, I can’t take out loans. The only way out of this is to move to public housing.”

...Only 1,011 units out of a proposed 29,500 for public housing were completed as of February in eight prefectures in the northeast, according to estimates from the land ministry. Japan set up the program for people who lost their homes in the disaster and are unable to rebuild on their own...

“Temporary housing is becoming very old everywhere; most people want to move to public projects,” he said. “The reconstruction isn’t taking shape in a way that we can see any progress.”


Memorial services were held across the country, with a moment of silence observed at 2:46 p.m. when the massive quake occurred and forced the evacuation of about 470,000 people in the ensuing chaotic days...

More than 3,000 people have died since the disasters from stress-related factors, including suicide, with many of these fatalities coming among people living in evacuation centers.

In the Tokyo court suit, 234 evacuees from 73 households newly demanded ¥4.6 billion in damages. The plaintiffs include a Tepco employee who was working at the nuclear plant at the time of the meltdowns in March 2011 and is now on sick leave.

New damages suits were filed by 167 people at the Tokyo, Okayama, Saitama and Matsuyama district courts.

At the Tokyo court, 43 people from 21 households who have vacation homes in Fukushima Prefecture filed a new lawsuit demanding a total of ¥1.3 billion in damages for their properties.


... 2,973 people died of causes related to the disaster, such as deteriorating health resulting from the evacuation and suicide, in Iwate, Miyagi and Fukushima, the three worst-affected prefectures in the Tohoku region.

In Fukushima Prefecture, the number of deaths resulting from evacuation after the nuclear accident exceeded that of the earthquake and tsunami.

About 267,000 people nationwide are still displaced due to the 2011 disaster.

About 104,000 households live in temporary housing.


Three years have passed. But it will take much more time for these children to gain a sense of belonging or to be able to make efforts toward self-realization."

As general contractors enjoy increasing demand in Tokyo to prepare the capital for hosting the Games, disaster-affected areas are facing severe shortages of labor and building materials, as local officials feared in the survey.