Via our friends at Green Action Japan, a Kyoto-based citizen organization that believes Japanese energy policy should shift away from nuclear fuel cycle development to advancement of conservation, energy efficiency, and renewable energy sources.

No One Held Criminally Responsible for Man-Made Accident

Three years into the Fukushima nuclear power plant accident, not a single individual has been held criminally responsible for the disaster. This is in spite of the fact NAIIC (The National Diet of Japan Fukushima Nuclear Accident Independent Investigation Commission) stated on 5 July 2012 in its final report that, “The TEPCO Fukushima Nuclear Power Plant accident was the result of collusion between the government, the regulators and TEPCO, and the lack of governance by said parties. They effectively betrayed the nation’s right to be safe from nuclear accidents. Therefore, we conclude that the accident was clearly “manmade.”

Responsibility for Tsunami Underestimation Should Also be Investigated

In February 2002, those responsible in the Japanese government for establishing tsunami warning levels chose the estimate of the Nuclear Civil Engineering Committee of the Japan Society of Civil Engineers. This committee was and is riddled with people from the electric utilities, the Central Research Institute of Electric Power Industry (CRIEPI), the Nuclear Waste Management Organization of Japan (NUMO), and the Japan Nuclear Cycle Development Institute (JNC) . The government chose this committee’s estimate over the scientific estimate established by authoritative earthquake and tsunami experts, the Earthquake Research Committee of the Headquarters for Earthquake Research Promotion.

Responsibility for this underestimation of the tsunami must also be investigated.

Japan is riddled with earthquake faults. There are innumerable earthquake faults under and in the vicinity of Japanese nuclear reactors. Electric utility applications uniformly are under-estimating the seismic motion that could occur in the vicinity of reactors. Electric utilities are using one method to determine the tsunami height potential in the event of an earthquake (the Takemura calculation method), but use a different method (the Irikura/Miyake calculation method) for the same earthquake when they determine the potential seismic motion that would strike the nuclear reactor site. Both look into high magnitude earthquakes but the Takemura method is modeled after past Japanese earthquakes (taking the average), whereas the Irikura/Miyake model uses (with the except of one earthquake which took place in Japan) past earthquakes that have occurred around the world (likewise taking the average).

The cause for the phenomena is unknown, but for any given earthquake area (length and width), the shift that occurs with Japanese earthquakes is greater than earthquakes that occur in other parts of the world, resulting in greater earthquake moment i.e. more earthquake motion. In fact, Japan’s average (i.e. the average derived by the Takemura calculation) is equal to the most severe end of worldwide earthquakes.

The result of using basically non-Japanese earthquakes to estimate the potential damage to nuclear reactors in Japan results in severe underestimation of the degree of damage that could occur if and when a serious earthquake strikes a Japanese nuclear reactor. For example, for the Ohi Unit 4 plant, Kansai Electric’s application under-estimates by 4.7 times the seismic motion that could hit the Ohi site. In other words, if Kansai Electric were to use the Takemura calculation method instead of the Irikura/Miyake method which it is using, Ohi would be hit by 4.7 times greater seismic motion. None of the Japanese reactors including the Ohi site would pass regulatory requirements if electric utility applicants used the Takemura calculation method.

In the NRA restart hearings, the Nuclear Regulatory Agency has pointed out the Takemura figure and told Kansai Electric that this and other methods should be used to calculate seismic motion at Ohi Unit 3. However, when asked if the NRA would actually follow up on this issue, it pretends that it never mentioned the Takemura method.

Will the Nuclear Regulatory Authority Break Its Own Rules?

During the assessment of whether reactors meet the new regulatory standards put in place on 8 July 2012, the NRA appears to be ready to break its own rules.

For example, new NRA regulations state that the level of hydrogen in the containment vessel cannot exceed 13%. This is for avoiding a hydrogen detonation . In spite of this being a new regulation, all electric utilities have undertaken only one modeling (all utilities use the same method to calculate the hydrogen concentration: GOTHIC) for the potential hydrogen concentration that could occur in the containment vessel in the event of an accident (using MAAP for the accident process that yields the hydrogen.)

For example, with the Ohi Unit 3 and 4 reactor applications, Kansai Electric’s estimate is that the degree of hydrogen concentration could go up to 12.8%. But since the margin of error for MAAP should be taken into consideration, the figure would exceed the 13% regulatory limit.

New regulations require plans for evacuation of all individuals around a 30km limit, the PAZ (Urgent Protective Action Planning Zone) of nuclear power reactors. There is also a PPA guideline (Plume Protection Planning Area), which would set requirements beyond a 30km limit. The government has stated they do not know when they can issue the PPA guideline.

No regional authorities have workable emergency preparedness plans in place.

Citizens from the northern end of Japan (Hokkaido) to the southern end of Japan (Kyushu) are holding meetings with the Nuclear Regulatory Agency and ANRE (Agency of Natural Resources and Energy, MITI), addressing safety and these nuclear emergency evacuation plans.

There are zero nuclear power plants operating in Japan today. The NRA will probably be selecting one to two reactors on 13 March for fast-tracking the new regulatory requirement review process. Japanese media report that the NRA will probably be completing the inspection process for this/these application(s) by the end of April, with the aim of restarting the first reactor in June.

Citizens all over Japan are fighting to prevent restart of nuclear power in Japan. 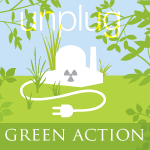 Posted by TenThousandThings at 12:00 AM
Email ThisBlogThis!Share to TwitterShare to FacebookShare to Pinterest
Labels: 3/11, Japan, Nuclear-Free