1,760,000 supporters of the Japanese Peace Constitution ask PM not to change Article 9 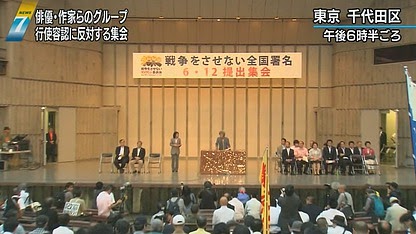 June 12, 2014 meeting in support of the Japanese Peace Constitution. (Photo and Story: NHK)

The Peace Clause of the Japanese Constitution, Article 9, renounces “war as a sovereign right of the nation and the threat or use of force as a means of settling international disputes." This has been understood by the courts and all past governments of Japan to prohibit collective self-defense, or engagement in force, except for direct defense of Japan.

On June 12, Japanese Peace Constitution supporters gathered in Tokyo to proclaim their support of Article 9 and opposition to "collective self defense."  Organizers, which included Nobel Laureate Kenzaburo Oe, presented the signatures of 1,760,000 people to the prime minister and after the meeting, they marched to his official residence, and called on him not to change  the Constitution.

Just two days before, the Article 9 Association commemorated its tenth anniversary on June 10th, in Tokyo.  Since its formation, the group has generated more than 7,500 local Article 9 chapters across Japan. 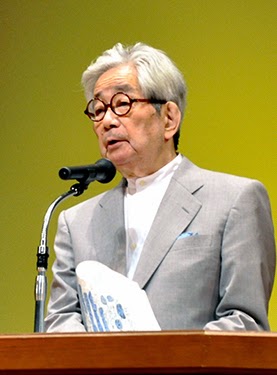 Kenzaburo Oe lecture at the June 10, 2014 anniversary gathering.
(Photo: Takashi Togo, via Asahi, which is providing outstanding reportage on Article 9)

The inaugural members formed the association in response to former PM Koizumi's deployment of Japanese SDF troops to Iraq and Kuwait after Washington's request for Japanese "boots on the ground" during its invasion of Iraq. Since the end of the Second World War, Japan has not been responsible for death of a single person in war. The Japanese Self Defense Forces (JSDF) engaged in "non-combat" support in Iraq and Kuwait from 2004 to 2008. On April 17, 2008, Nagoya High Court made a (non-binding) ruling that Koizumi's dispatch of troops to Iraq was unconstitutional. 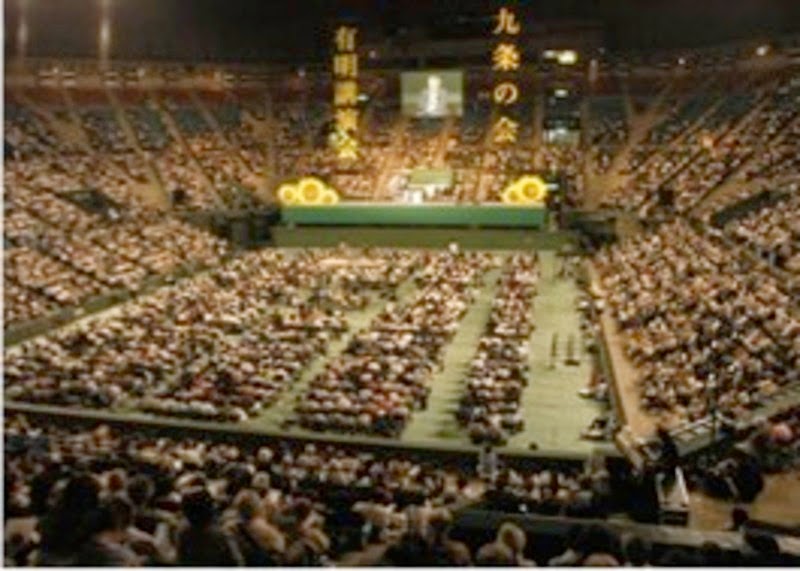 In addition, Koizumi initiated an attempted revision of Article 9, the Peace Clause of the Japanese Constitution, which prohibits Japan from possessing military power other than than what is necessary to defend the nation from attack.  The former PM wanted to change the JSDF from a solely defensive force into a regular army which would be dispatched to support foreign wars, under the auspices of "collective defense," without constraint.

At present the LDP and its coalition partner, New Komeito, has enough votes in the lower house but only 55 percent of the upper house, not enough to call a referendum under Article 96 which requires approval of two-thirds of the Diet.  Even if the administration did, the consensus of analysts is that a referendum would fail.

Therefore the administration is trying to push through a "reinterpretation" of Article 9 by the Cabinet Legislation Bureau, which conventionally provides oversight on bills, orders and treaties and provides legal opinions to the PM.  In the past, LDP governments, advised by the Cabinet Legislation Bureau, have asserted that "collective self defense" exceeds the "no-war" limits of Article 9, therefore, Japan cannot engage in collective self defense.  Not only does the current administration's "reinterpretation" fall outside of the range of possible reasonable interpretations of Article 9, to the point of violating both the spirit and the letter of the no-war cause, such a move would set a precedent for the executive branch to bypass the deliberative participatory process of amending the constitution that requires approval by Japanese citizens in a special referendum under Article 96.

For many advocates of democratic process and rule of law, the central issue is not the (albeit critical) debate over whether Article 9 should be amended to allow "collective defense," but instead the attempt by Japan's executive branch to bypass these constitutionally mandated procedures to change the constitution unilaterally.

The two political parties in control of the government, the Liberal Democratic Party (LDP), and New Komeito (which is affiliated with Soka Gakkai, a mass Buddhist organization),  do not represent a majority of the Japanese citizenry.  According to Shingetsu News (yesterday), 27.2 percent of the country support the LDP and 3.3 percent back New Komeito. That's a total of only 30.5 percent of the population.

An Asahi poll found that only 29 percent (around the percentage of voters that support the Liberal Democratic Party (LDP), Abe's political party) approve of Japan's taking up collective self defense. But even less, only 18 percent, support the administration's improvised method of constitutional change.  The poll also found that 67 percent of Japanese voters consider the move for reinterpretation as "improper."

Moreover, as with internal dissent in 2004 over sending JSDF to Iraq, the LDP in 2014 does not unanimously back PM Abe's call for constitutional reinterpretation. Former LDP Secretary-General Koga Makoto, who lost his father to the Pacific War, has publicly criticized this plan. Similarly to several Nobel Peace laureates, Koga considers Article 9 a "world heritage."

Concerned about their nation, high profile Japanese figures are increasingly speaking out on behalf of Article 9, the peace clause. On the eve of his birthday in December of last year, Emperor Akihito (tutored by an American Quaker during his youth) defended Article 9. Then, on the eve of his birthday in February of this year, Crown Prince Naruhito attributed Japan's peace and prosperity to the pacifist Constitution.

A-bomb survivors in Nagasaki are now demanding that explicit support for Article 9 to be included in this year's Peace Declaration, according to the Asahi this morning.

Those familiar with Japanese history know that this latest chapter of a cultural and political conflict between Japanese militarists and pacifists has numerous antecedents going back to the prewar and the early postwar period. Kijuro Shidehara, an advocate of pacifism in Japan before and after the war, helped prepare the Kellogg-Briand Pact (General Treaty for Renunciation of War as an Instrument of National Policy) of 1928, of which Japan was a signatory (prewar and wartime militarists ignored the treaty). And, as Japan's second postwar prime minister, Shidehara conferred with the US Occupation, especially General MacArthur, as the postwar constitution was drafted.  (MacArthur attributed Article 9 to Shidehara, although some scholars dispute this.)

Since its promulgation in 1946, Article 9 has been frequently undermined, but the Japanese people have repeatedly rebuffed attempts at constitutional revision. For this, the Peace Clause has ensured that they have not been "visited with the horror of war through the action of government" for seventy years. The late scholar John M. Maki asserted that pacifism, popular sovereignty, and the guarantee of fundamental human rights are foundation of the Japanese constitutional system, and that the "people of Japan made the Constitution their own, and thus carried to completion one of the most successful and significant political transformations of the twentieth century."

At this point, Japanese civil society groups and elected officials who honor accountability to their constituents must consider and initiate countervailing actions that will challenge the executive branch's unprecedented unconstitutional overreach.

(This post is an expanded version of a tribute to the Article 9 Association posted June 10.)

Komori Yoichi, "Japan’s Article 9 and Economic Justice: The Work of Shinagawa Masaji" by , (Intro by Norma Field), published this week at The Asia-Pacific Journal: Japan Focus:

On June 10, 2014, the Article 9 Association marks its tenth anniversary, more than ever embattled and determined. As illustrated by Alexis Dudden’s recent article on this site, “The Nomination of Article 9 of Japan’s Constitution for a Nobel Peace Prize,” business people figure in the broad swath of “Japanese people who conserve Article 9” recognized as worthy of consideration for the Peace Prize by the Norwegian Nobel Committee. Shinagawa Masaji, the subject of this memorial tribute by prominent modern literature scholar and executive secretary of the Article 9 Association Komori Yoichi, was surely the dean of progressive financial leaders of the postwar era...

Shunsuke Hirose, "Shinzo Abe’s Biggest Enemy: the LDP: Internal party discord shows the narrative of Japan’s rightward shift under Abe is not as simple as it might appear," The Diplomat, April 14, 2014.

John Junkerman, "The Global Article 9 Conference: Toward the Abolition of War," The Asia-Pacific Journal: Japan Focus, May 25,  2008.