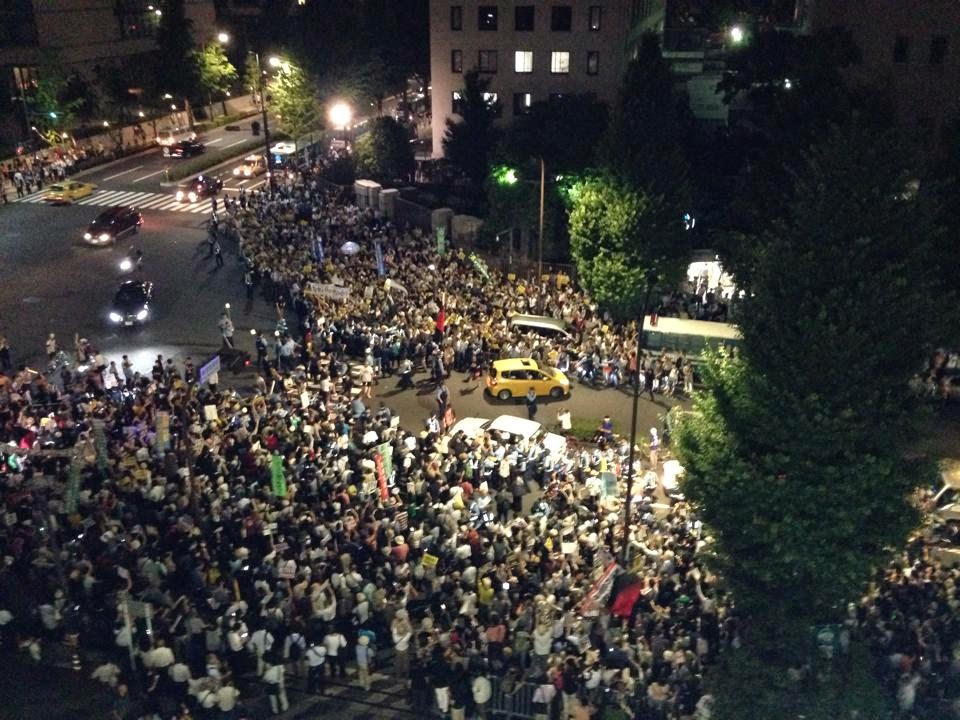 "Protest crowd so large that cars cannot pass at all. Shouts against war at PM Abe's office."
Via Shingetsu News on Twitter and FB: 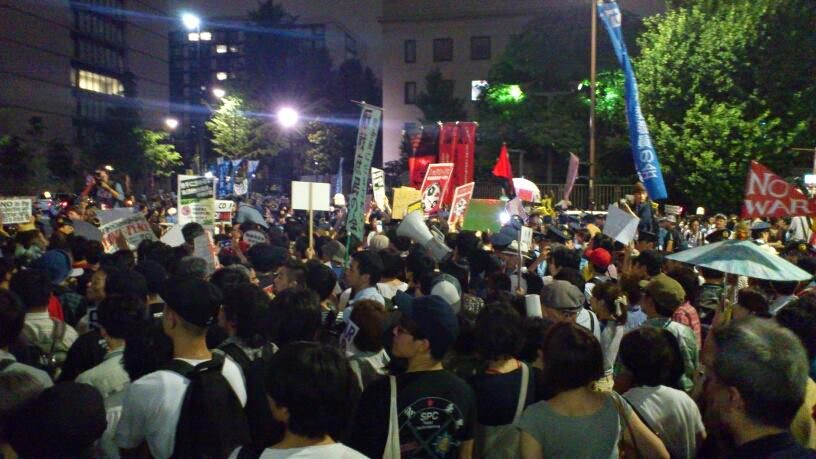 
In despair over the PM's "reinterpretation" of the Japanese Peace Constitution, a middle-aged man set himself on fire yesterday in Shinjuku yesterday.  Protesting the same, over 10,000 rallied Monday evening past midnight in Tokyo today.

However, nothing, even the protests of 90% of its constituency has been able persuade New Komeito, the Liberal Democratic Party's coalition partner, from rubber-stamping the administration's unilateral move.  New Komeito, was founded in 1964 by the mass Buddhist organization, Soka Gakkai. Around 3.3 percent of the population backs New Komeito. The religiopolitical party's success stems its voting machine, fueled by the devotion of lay members throughout Japan.

Both New Komeito and Soka Gakkai profess pacifism. Over the past two decades, however, New Komeito's actions have served to undermine, instead of safeguarding the Japanese Peace Constitution's anti-war aims. Party leaders say they will try to make their constituents "understand" this latest.  But will the rank and file go along with New Komeito's combination blow to Article 9, which outlaws war, and Article 96, which governs the process of constitutional revision?

Fueled by harsh memories of prewar capitulation to the militarist government, mainline Buddhist and other faith-based groups in Japan remain steadfast and united in their support of Article 9, the Peace Clause, which renounces “war as a sovereign right of the nation and the threat or use of force as a means of settling international disputes." (This has been understood by the courts and all past governments of Japan to prohibit collective self-defense, or engagement in force, except for direct defense of Japan.)

A May 26 Asahi poll found that only 29 percent (around the percentage of voters represented by the Liberal Democratic Party (LDP), Abe's political party) approve of Japan's taking up collective self defense.  Even less, only 18 percent, support the administration's improvised method of constitutional change.  The poll also found that 67 percent of Japanese voters consider the move for reinterpretation as "improper."

Concerned about their nation, high profile Japanese figures have increasingly spoken out on behalf of Article 9, the peace clause. On the eve of his birthday in December of last year, Emperor Akihito (tutored by an American Quaker during his youth) defended Article 9. Then, on the eve of his birthday in February of this year, Crown Prince Naruhito attributed Japan's peace and prosperity to the pacifist Constitution.

A-bomb survivors in Nagasaki are now demanding that explicit support for Article 9 to be included in this year's Peace Declaration, according to the Asahi last week.

Over the past few weeks, nearly 160 prefectural and local governments have condemned the "reinterpretation" of the Peace Clause, citing commitment to Article 9's anti-war aims and opposition to the extraconstitutional means used by the PM. These governments include Nagano and Gifu prefectures, the cities of Sapporo, Aomori, Naha, and Nago.

At this point, Japanese civil society groups and elected officials who honor accountability to their constituents must consider and initiate countervailing actions that will challenge this unprecedented executive overreach.

"Shinzo Abe’s Biggest Enemy: the LDP: Internal party discord shows the narrative of Japan’s rightward shift under Abe is not as simple as it might appear," Shunsuke Hirose, The Diplomat, April 14, 2014.

"The Global Article 9 Conference: Toward the Abolition of War," John Junkerman, The Asia-Pacific Journal: Japan Focus, May 25,  2008.

All to make America happy: buy more of its weapons, and join the next 'coalition of the willing'.

What other purpose is there? Japan cannot take on China or Russia even in self-defence, nuclear powers, nor even N. Korea for the same reason. Neither can it take on S. Korea, as both it and Japan are within American suzerainty. This move, even for the most cynical reasons, is decades behind the emerging realities in the West Pacific, but so is the LDP.