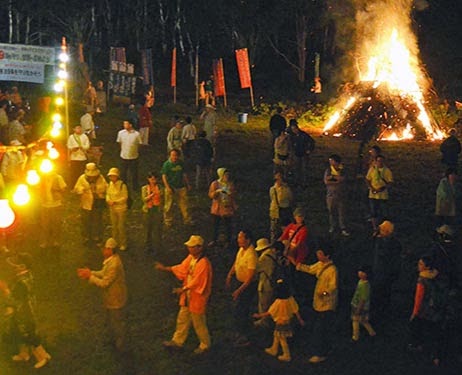 Evocative photos and article by Masashi Rokubuichi at The Asahi on the 50th anniversary of an OBon peace festival in Betsukai, Hokkaido. The festival has been held on the farm of Hanji Kawase who died five years ago. His land was in the middle of of a vast tract of land formerly a farming village taken over in 1963 by the Japanese government for the Yausubetsu live-fire training field that is used by both the US military and the JGDF.


“The large turnout can be attributed to) not only the milestone anniversary but also the outpouring of public anger against the Abe administration regarding the right to collective self-defense and other issues,” said Kato, a 72-year-old former junior high school teacher from Hamanaka, Hokkaido...

People from across Japan listened to music and danced at the Kawase farm in the middle of the Ground Self-Defense Force’s Yausubetsu drill site, which straddles Betsukai and two other towns.

One big topic of conversation at the festival was the decision of Prime Minister Shinzo Abe and his government on July 1 to reinterpret war-renouncing Article 9 of the Constitution to lift Japan’s self-imposed ban on exercising the right to collective self-defense.

The farm used to be run by anti-war landlord Hanji Kawase who died five years ago.

The mid-August Bon holiday season in Japan is a time when people travel to their hometowns to honor their deceased ancestors. The spirits of the dead are believed to return home during the period. Bon Odori dances are held at local festivals throughout the country.

Sachiko Watanabe, who took over the farm from Kawase about 10 years ago and has lived there ever since, said she is well aware of the symbolic nature of the anti-war Bon dance festival, given Kawase’s continuous defiance of the government.

She indicated that the festival has taken on increased significance because the current administration shifted security policy away from postwar Japan’s pacifist ideals.